7 recipes for a homemade slime 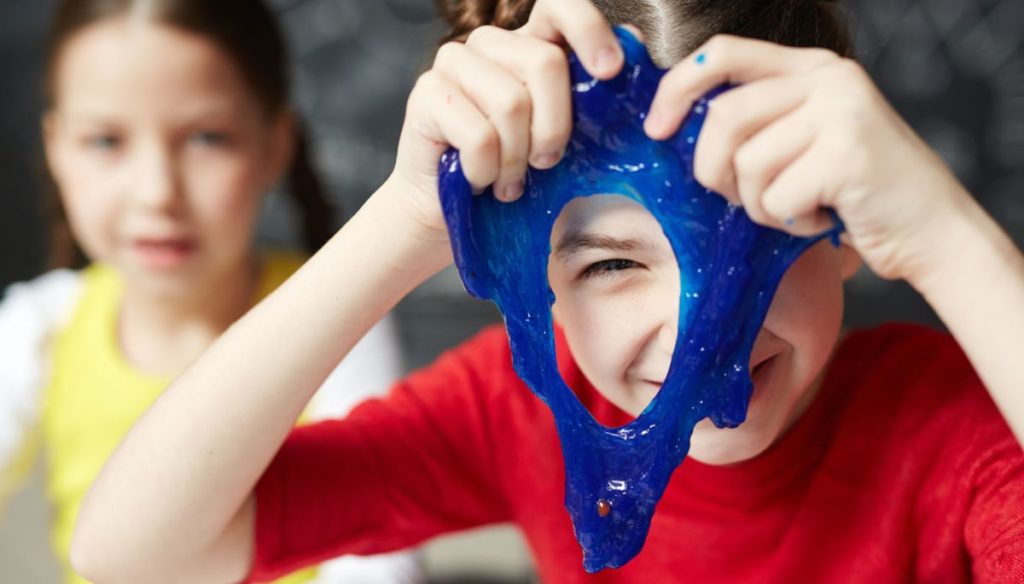 The slime is one of the favorite games of children of every generation, starting from the seventies. Here are 7 simple recipes to make a personalized slime at home

Slime is a soft, slimy and sticky modelable paste, often defined as disgusting, which has always amused children of all ages very much, as well as being widely used by adults as an anti-stress. But why is slime a favorite among children? Simple: because the slime can be manipulated and pulled at will, each time giving it a different shape without ever losing elasticity, it can be easily handled infinitely, it can be attached and poured from any surface.

History of the slime

The slime was introduced in Italy by Mattel in the seventies, it was initially green in color and its classic soggy consistency was due to its main ingredient, namely Guar gum, a sticky element obtained from a particular plant.

In the eighties the slime was known by all the children of the world thanks to Slimer, the gummy ghost of the movie "Ghostbusters – Acchiappafantasmi", which later became a cartoon. In the nineties he returned to fashion again and was marketed in different colors and variants, especially with the Skifidol brand, successfully sold in newsstands and toy stores throughout Italy.

In recent years, the slime has returned to the fore especially on social networks, literally invaded by tutorials dedicated to the production and customization of slimes, as well as by the famous Slime Challenge, a challenge that has immediately become viral in which many young people, but also famous youtubers, actors and singers, they began to publish on their social media profiles that portrayed them while they were throwing the slimy slime on their heads.

How to prepare the slime at home: 7 recipes

Even if the slime can easily be bought at newsstands or in toy stores, it is certainly more fun to create a personalized slime in your own home, following the many simple and fun recipes that can be made together with the children, giving free rein to their imagination.

The basic recipe of the slime involves the use of vinyl glue and borax, which serves to make the slime elastic: borax, however, is a toxic ingredient, which is better replaced with other elements that are not harmful and easily available, such as laundry detergent , the bicarbonate mixed with the liquid of the contact lenses, the starch or liquid starch, the talcum powder, the cds glue activators.

Even the vinyl glue, although the one on the market is non-toxic, can be replaced by other natural ingredients such as toothpaste, corn starch, shampoo or Marseille soap. To personalize the slime, on the other hand, you can use extra ingredients like food coloring, shaving foam, baby oil, scented soap, glitter and glitter, and even condensed milk to make a slime to eat!

Be inspired by our recipes to create your personal slime: the only limit is imagination!

The first recipe is that of slime with vinyl glue, so in the presence of children, adult supervision is necessary, even if it is a non-toxic ingredient. You need 150 ml of PVA glue, 70 g of talcum powder (instead of borax) and, as desired, of food coloring.

After placing the PVA glue in a bowl, immediately add a teaspoon of colorant so that it is better absorbed by the slime, and then stirring gradually add the talcum powder. When the mixture has reached a thick and uniform consistency, you can work it with your hands until you obtain a homogeneous result.

Always based on vinyl glue, this variant owes its name to the "stony" and "crunchy" consistency of the compound. For this recipe the solution for contact lenses is used, which acts as an activator making the glue elastic to achieve a perfect glittery slime. The necessary ingredients are 100 ml of transparent vinyl glue, 20 ml of solution for contact lenses, 50 ml of water, 1 teaspoon of baking soda, glitter or glitter and food coloring.

The procedure is very simple: just add a pinch of baking soda to the transparent glue, thicken it with the contact lens liquid, add a little food coloring and, lastly, the rhinestones and the glitter, mixing everything until you get the elastic consistency of the slime. 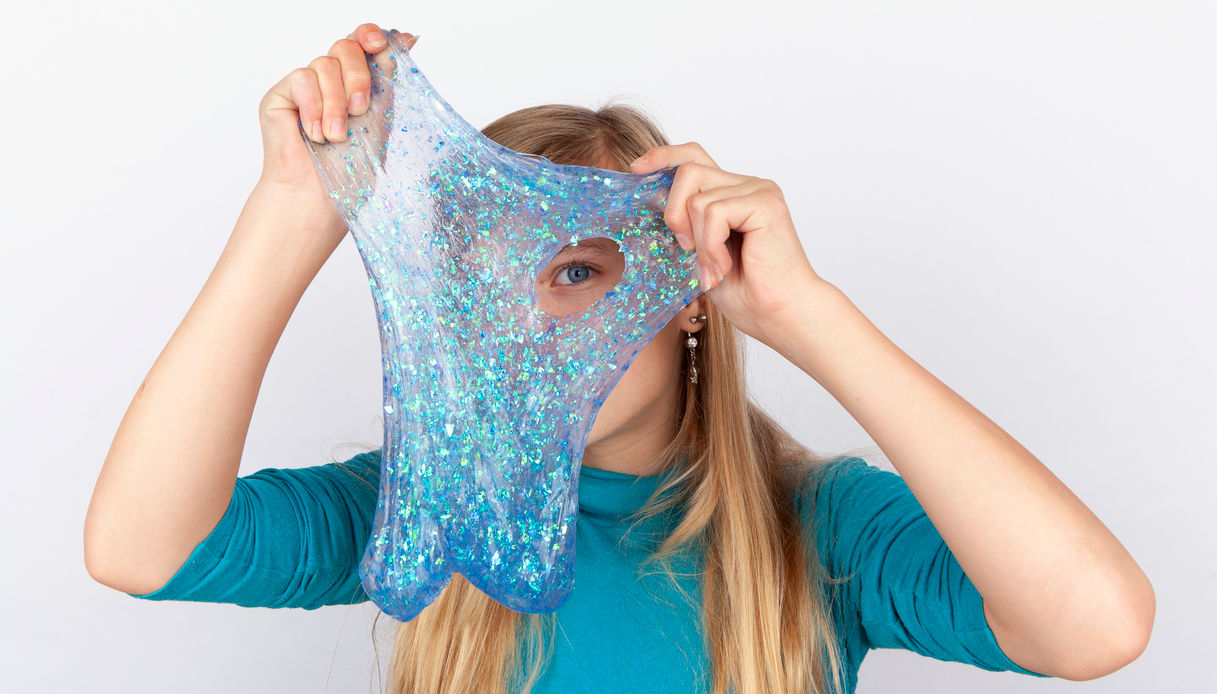 3. Slime without glue with only two ingredients

For those who prefer to make slime without using vinyl glue, you can find many recipes with alternative ingredients. The simplest ones use only two ingredients.

A first proposal is to mix 140 grams of corn starch (Maizena) with 250 ml of hot water with the help of a spoon, then work the mixture with your hands until you get the desired consistency. The slime must then rest in the freezer for 10 minutes, checking that it does not harden too much. To create a colored slime, just add the food coloring to the hot water before adding the corn starch.

With the corn starch you can also prepare the slime that moves: just mix 90 grams of corn starch with 500 ml of seed oil and let the mixture rest in the fridge for at least half an hour: approaching and removing the slime from an object with electrostatic charge, you will see it literally move, with safe fun for children.

Another recipe without glue with only two ingredients is shampoo and toothpaste. Even in this case, you have to mix in a bowl a shampoo not too liquid and a toothpaste in gel, in equal parts, until you get a homogeneous mixture. After 10 minutes of rest in the freezer, the slime is ready.

To obtain a slimy and elastic slime, but a little more compact, just mix 1/3 gel toothpaste tube with 70 grams of corn starch and a pinch of salt.

Using simple soap, you can make an elastic and fragrant slime! You need 100 gr of Marseille soap flakes, 1/2 liter of hot water and 50 grams of corn starch, to which you can add food coloring at will to give the slime the favorite color. You have to mix the boiling water with the soap flakes in a bowl until they dissolve, then add the food coloring and mix well.

After the mixture has rested for about an hour, it should be worked again with a whisk until it has a slimy and frothy consistency, adding a little cornstarch if it was too soft.

Glue, bath foam, water, corn starch and dye are mixed together with a few grams of bicarbonate, and then the contact lens solution is added. To soften the mixture a little, just add more shaving foam and mix with the baby oil. And voila, the butter slime is ready!

The little ones, as we know, tend to put anything in their mouth, even better if they have a consistency that is as dry as slime. To avoid any inconvenience, just follow this recipe to make an edible slime, using 450 ml of condensed milk, 20 g of corn starch and, to taste, of the food coloring.

You need to heat the condensed milk over low heat and gradually add the corn starch, mixing everything until the mixture is well blended and thickened. At this point, you can remove the saucepan from the heat and let the gelatinous paste cool down, after adding any food coloring. The end result will have less elasticity than the other slimes, but you will not have to rush to the emergency room if the children should swallow it.

To conclude this series of slime recipes, the Fluffy Slime could not be missing: a spectacular slime, soft and with an almost foamy consistency, more compact, elastic, slimy and rubbery than the classic slime. Very few ingredients are needed: shaving foam, transparent glue and vinyl glue, liquid detergent, baking soda and food coloring!

First, mix a cup of PVA glue and one of clear glue in a bowl, add the dye, add half a cup of shaving foam and mix vigorously. By adding a spoonful of baking soda, the mixture will begin to harden and become rubbery: it is time to combine three tablespoons of liquid detergent to make the Fluffy Slime fragrant. Continue to work the mixture with your hands until you reach the desired consistency.

Beyond the endless variations that can be found on the net, there are some simple tricks to adopt both to personalize the slime, and to keep it at its best and make it last longer.

For a slime less sticky and more resistant, just double the dose of activator chosen: corn starch, bicarbonate or liquid detergent. To best preserve the slime, just put it in a closed container in a cool, dry place: in the open air, in fact, the slime will dry out in a short time.

Try to avoid playing with the slime on the carpets: being sticky, it easily fills with dust and dirt. A very simple trick to entertain children is to place the slime in a cup, maybe a mug: trying to crush it, the slime will produce a really funny sound!