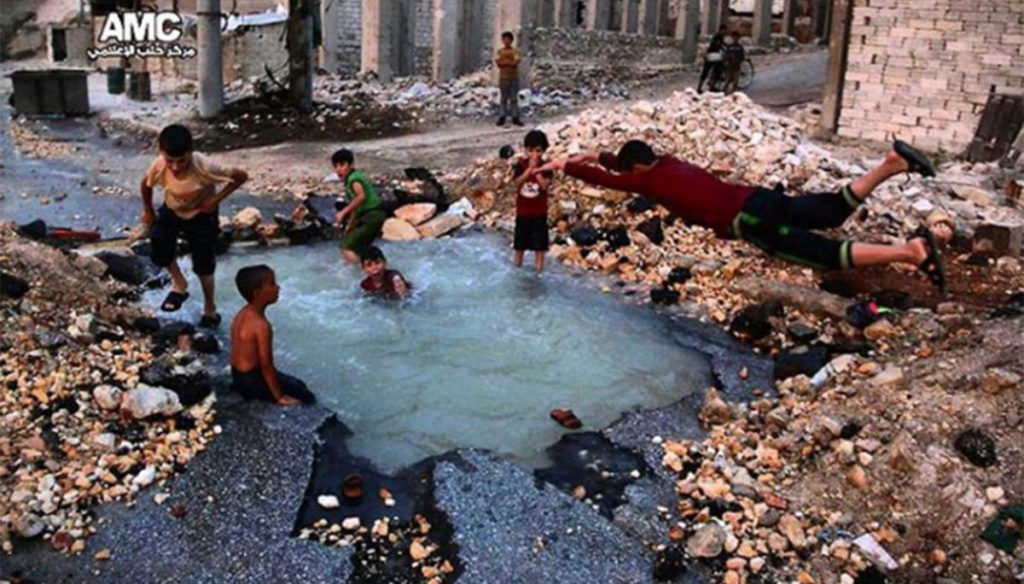 As the war in Syria continues, the children of Aleppo have managed to transform a bomb crater into a swimming pool to play in 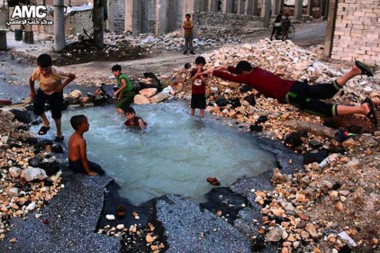 In Aleppo the crater of a bomb turns into a swimming pool. To show the photo on social media the activists of Aleppo Media Center, who wanted to bring attention to the situation of children in Syria. In the photos, the children trapped in the besieged city have fun as they can and on the street everything can become a game, even the crater of a bomb.

The chasm, created in the Sheikh Saeed neighborhood by a missile attack by the government forces of Bashar Al Assad, once filled with water, it turned into an outdoor swimming pool where children dive, splash and try to swim. In one of the cities most affected by the war, while everything is destroyed around it, the children of Aleppo have found a way to carve out a corner of normalcy, having fun in a pool of water created by missiles that have reduced everything to rubble.

The Aleppo Media Center, which has been reporting on the civil war that has affected the country since 2011, commented on the photo released on social media explaining: "Whatever Assad does in Aleppo, life will not end. His children revive everything destroyed. " The image comes exactly one year after the death of little Aylan, who became a symbol of the horror of the war and the desperate conditions of Syrian children.

The image of the body of that three-year-old boy, lying face down on the beach in the Turkish city of Bodrum, in blue shorts and red shirt, had shocked the world. The boy had drowned together with his mother and brother when the boat they were traveling on, in an attempt to escape Syria and the war, had capsized. A year later, the situation of children in Syria has not changed. There are 130,000 children who risk their lives every year, as Helle Thorning Schmidt of Save The Children International also recalled: "They study in the basements to shelter from air raids, dodge the snipers' fire or go through dangerous checkpoints," he said.

Lorenzo Gavazzi
2479 posts
Previous Post
Meghan Markle pregnant? If he has a female he will not inherit the title
Next Post
Giulia Calcaterra, from depressed tissue to happy globetrotter