All together now, Michelle divine. But Anna is a true dark princess 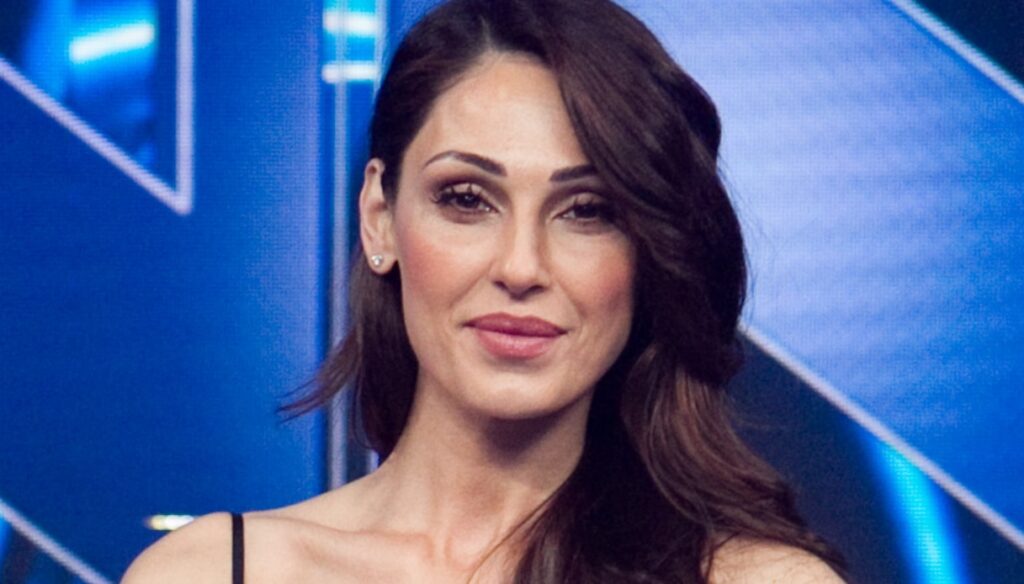 The new edition of “All together now” opened in the name of music, but also of style thanks to the divine Michelle Hunziker and Anna Tatangelo

All together now has officially opened its doors for a new edition dedicated to music and fun. The musical game show hosted by Michelle Hunziker and broadcast on Sunday evening on channel 5 saw the 14 contestants clash, ready to give their best at each episode to win the coveted prize of 100 thousand euros and the possibility of creating a cover with R101, the program’s official radio.

All together now, a winning team does not change

A crackling start for the first episode of All together now which saw, as usual, the hostess Michelle Hunziker and the four judges Anna Tatangelo, Francesco Renga, Rita Pavone and J-Ax protagonists in a fantastic live performance, on the notes of Faith from the timeless Stevie Wonder.

Five voices that come together perfectly, thanks (in addition to talent) also to the great feeling that the cast has built over time. It is no coincidence that, in fact, it has remained unchanged by popular acclaim: after the last edition which recorded excellent numbers in terms of ratings, this year All together now promises sparks.

He’d given a glimpse of All Together Now’s first look on social media, but his vision on stage at the music game show was something else entirely. Michelle Hunziker surprised the audience with a red dress that only she can wear so divinely, with simple but captivating lines.

Long to the feet and with long sleeves, Michelle’s dress left the back open in a bold but classy way. To complete the whole, a pair of ton sur ton stiletto heel sandals with the dress and the inevitable long bob, worn with a wave effect just as it is fashionable in this autumn / winter 2021 and which has been showing off for a few weeks now. 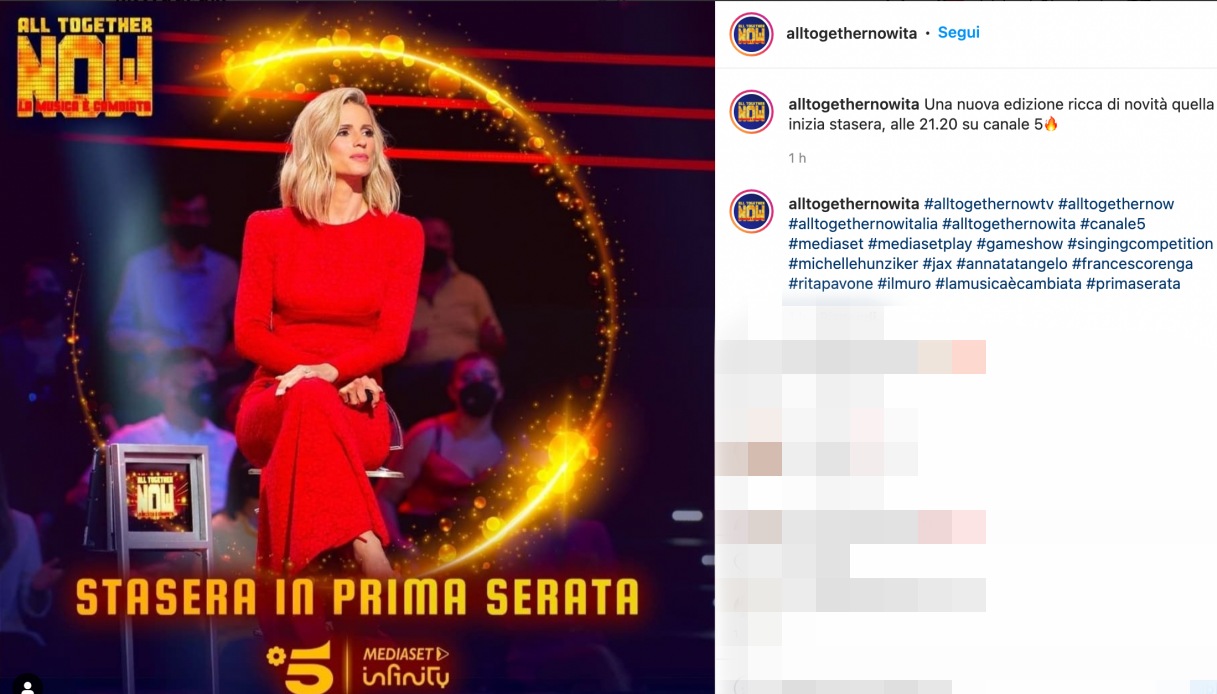 Michelle Hunziker in the first episode of “All together now”

If Michelle Hunziker dared with the “porthole” on her back, Anna Tatangelo once again left everyone breathless with an outfit with a strong personality. The National Nanny is a true queen when it comes to style and always flaunts outfits that leave their mark, not only those by soirée but also by day, as she demonstrated in Scenes from a wedding with which it airs every Sunday afternoon on Channel 5.

More beautiful than ever, Anna showed off a long dress like a true dark princess: the bandeau top wrapped her perfectly, leaving the hips and back uncovered, while the wide and draped skirt open on the front enhanced her long and toned legs. . For the rest, it took very little to make this look perfect: black tights, high heels and hair left loose on the shoulders with a slight wave effect. Simply divine. 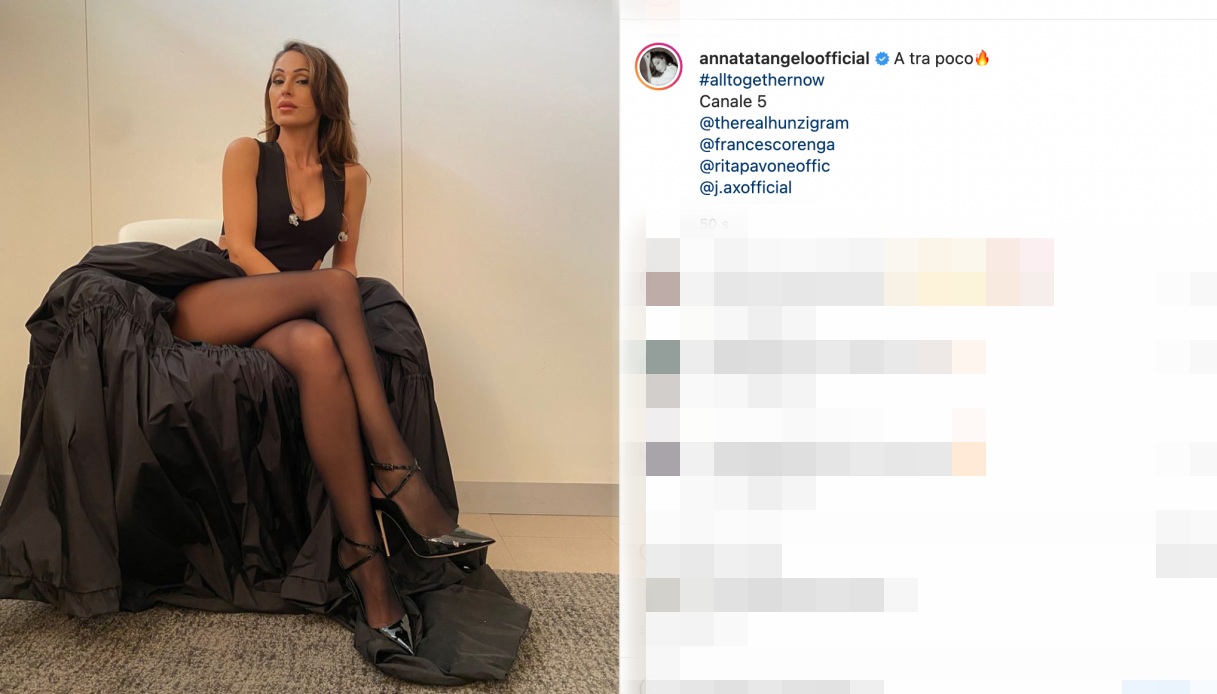 Anna Tatangelo principessa dark a “All together now”

He is 36 years old, he comes from Rome and we must admit that he literally split on stage. Michelle Perera has hit the mark thanks to her strong personality that echoes in a black voice to say the least beautiful. Powerful as a young Aretha Franklin, the young singer is no stranger to the world of All together now (she has already participated in the German edition) and managed to conquer a 100 tondo tondo at her first performance. Then “climbed” by two points by Rita Pavone and vaguely criticized by Francesco Renga, which sparked the disapproval of the Wall.

A life for music but also dedicated to self-acceptance. And it is on this theme that we saw the first controversy of this edition of All together now. Directly from the Wall, actress Micol Ronchi felt compelled to give “advice” to Michelle Perera, arguing that all this talk of body positivity could send the wrong message: that of an aspiring star who uses this theme to grab her sympathies of the judges and win.

Needless to say, the young (but not at all naive) Michelle immediately replied in rhyme: “I’m free to talk about my body. I think body positive is about everyone, thin fat. I do not allow anyone, you can not make a note of this kind and I do not want to win anyone’s vote because I am like that. I’m here to sing and that’s it. You don’t tell me what to say, I know how to talk about this as well as anything else “. We are confident that this All Together Now competitor will give us satisfaction.