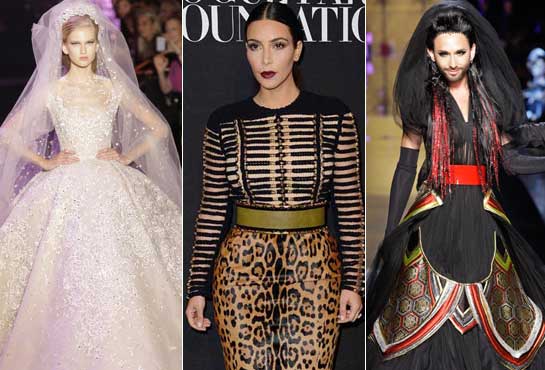 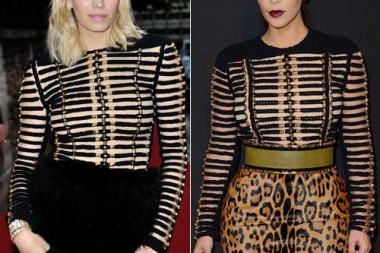 Jean Paul Gaultier does not deny himself and presents a haute couture collection based on excesses. Starting with the choice of displaying the bearded drag queen Conchita Wurst with a black wedding dress, with gold and red inlays, inspired by Russian matrioskas. The designer even knelt in front of Conchita to thank her for his presence. There was also a moment of fear on the catwalk when the 58-year-old model, Chaterine Loewe, fell. Without serious consequences, fortunately.

At the Valentino fashion show, inspired by the virgins and Ofelie of the pre-Raphaelite paintings, the protagonists were the impalpable, transparent fabrics, the precious embroideries, draperies and the almost inlaid designs. The only discordant note is Kim Kardashian who presented herself with an extreme look: a long celestial dress with a neckline so wide to leave the generous décolleté uncovered, not to mention the famous side B wrapped in a close-fitting dress.

The style chosen by Kardashian for the Vogue party does not change much in elegance where she wore a Balmain outfit complete with a leopard-print skirt and an "elastic" jersey, not even too original since the same garment was also worn by Elena Perminova as guest of Bulgari. Do you judge who is better?

The symbolic garment of Haute Couture winter 2015 is definitely the pregnant bride presented by Chanel and worn by a model in the seventh month of pregnancy. This model, which closed the show leaving everyone surprised, including Anna Wintour, director of Vogue America, wants to be a tribute by Karl Lagerfeld to motherhood and femininity. The dress is inspired by the style of Marie Antoinette, is of white silk with gold embroidery and has a long train in golden brocade. The effect is regal.

The celebs celebrated the greats of fashion. And many have chosen the nude look. Like Kristen Stewart, guest at Chanel, in white (color loved by the stars) with briefs in sight or Juliette Binoche with a sensual outfit who discovered black lingerie.
From Armani they have literally "shined" Kate Hudson with a splendid semi-transparent jumpsuit and Sophia Loren in a red crystal dress.

At the Christian Dior show Charlize Theron and Sean Penn arrive and the atmosphere comes on. The two, often paparazzati in intimacy, make a steady pair from New Year's holidays, but only gold came out of the closet in Europe. And for their debut they chose the most mundane event of the moment, the Haute Couture in Paris, like the mythical Hollywood couples, from Liz Taylor and Richard Burton to Katherine Hepburn and Spencer Tracy.

Charlize Theron is statuary with a gold mini dress and blush sandals. Sean Penn, solid and hard, charming with the wrinkles of a lived man. It's been a while since he was simply Mr. Madonna.

The two arrive hand in hand, they sit in the parterre and their fingers touch, their arms intertwine and he caresses her bare legs, a gesture almost of possession that arouses the envy of the other men present. And while passion burns between Charlize and Sean, there are clothes on the catwalk that are more works of art, inspired by the history of fashion, from long Edwardian coats to dresses with panier skirts.

You breathe more air from Versace. Guest of honor is J.Lo. The pop star is waiting like a real prima donna and Donatella Versace is forced to delay the show. But it doesn't matter. When Jennifer Lopez arrives, she is photographed embraced by the hostess, as if they were two friends. And for them also comes the merciless shot that highlights Donatella Versace's wrinkles and botox, while J.Lo has her eyes closed and seems to be asleep.

However, the singer wears a Versace creation, presented in blue, but created exclusively for her in white. The dress is splendid and enhances the sinuous body of J.Lo.