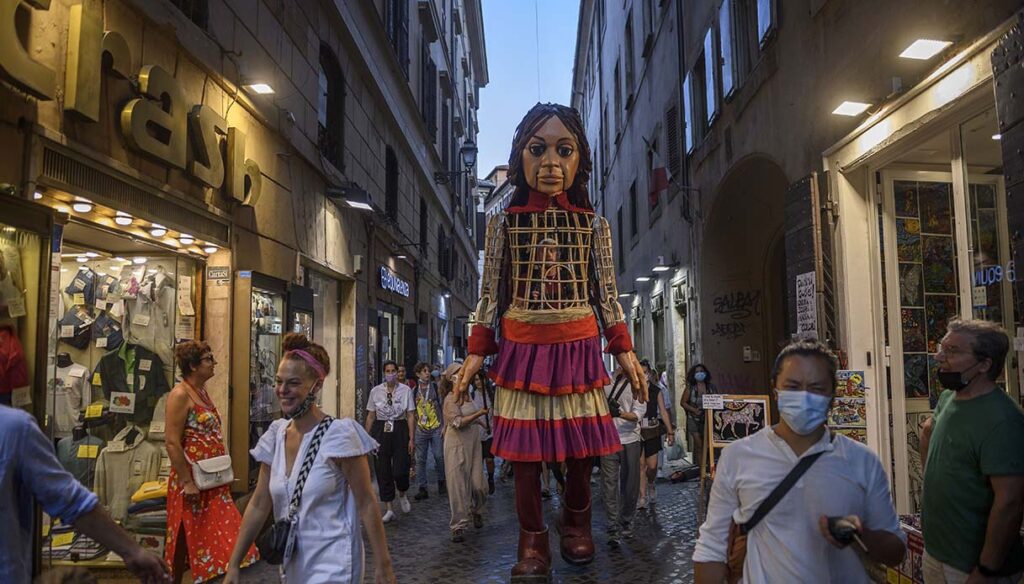 A giant doll walks the streets of Italy, it is Amal, the Syrian refugee looking for her mother who is traveling around the world

Amal also arrived in Italy, just as she promised. After all, the Syrian doll that is traveling around the world has a very specific mission: that of not making us forget her, or all the other Syrian refugee children.

The journey of Amal, the 3.5 meter high refugee doll, is long, indeed very long. Starting from Syria, it has already crossed the largest European capitals with the aim of raising public awareness on the situation in Syria and on the tragedy that the millions of children of the country are experiencing, forced to abandon their homes, and to give up their lives , because of the war.

Amal is one of them: a puppet that has the appearance of a small, but very large, Syrian refugee in search of her mother. Her name in Arabic means hope because she, like other children, truly believes in the possibility that one day her future can change and become better.

Thus, months ago, he began his journey. In Italy we will see her walking through the streets of Bari, Naples, Rome, Florence, Bologna, Milan and Sanremo from 7 to 19 September. His research will end in Great Britain, in Manchester.

Amal is the protagonist of The Walk, a project of the English team Good Chance, born in the refugee camp of Calais in 2015 from an idea of ​​the playwrights Joe Murphy and Joe Robertson, with the aim of creating shows and artistic projects attentive to social issues. and current, just like the one concerning Syrian children.

In fact, there are two and a half million minors living in the country who have been deprived of their future. They have no school, no education, they have no future due to the dramatic conditions in which they live in a war-torn territory. The only sure thing for them is pain. That caused by the killings, losses, missiles and bombings they have been experiencing for years.

A pain that Amal, the small but giant Syrian doll, wants to make known to the whole world through her pilgrimage. Together with her also numerous artists who will accompany her with musical performances, theatrical and dance shows with a great visual impact, so that the whole world can notice her and everyone else.