Amici 2021, Arisa displaces with her look. Sparks between Celentano and De Martino 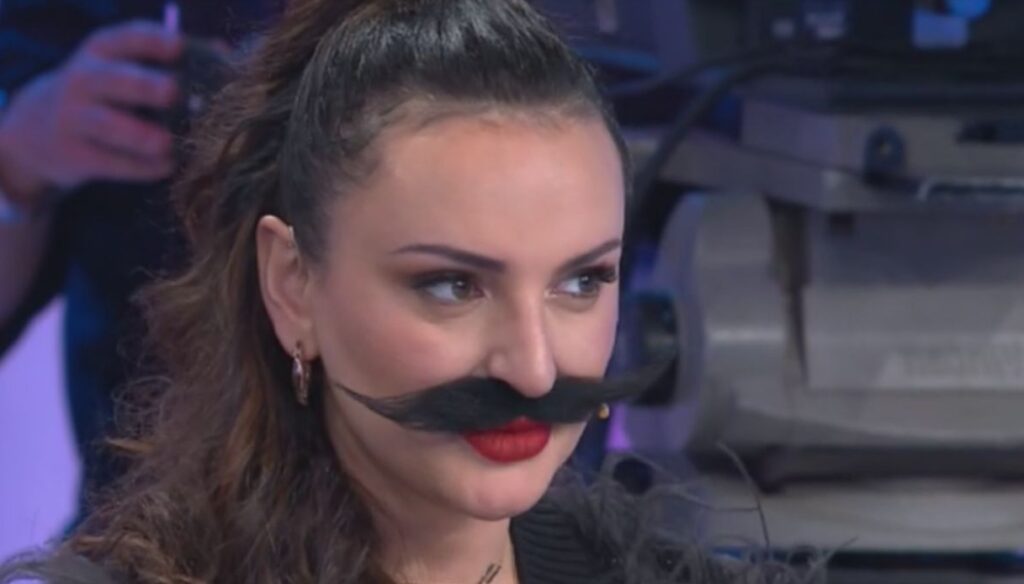 Arisa amazes everyone with an unusual look and an important message, while old disagreements re-emerge between Stefano De Martino and Celentano

Saturday means Friends of Maria De Filippi and the new episode of the Evening did not disappoint the expectations of the public. A continuous whirlwind of performances, music and strong emotions, with that pinch of tension that never hurts. Especially among talent teachers, who are increasingly fierce and ready to bring water to the mill of their students.

The episode of Saturday 3 April 2021 opened with an unexpected surprise. Arisa showed up in the studio with an unusual look to say the least: two big fake mustaches, worn with pride and pride. After the initial perplexity, it was the singer herself who explained the reasons for this particular choice. "This morning I was in doubt, I felt a bit male, a bit female. So I opted for non-choice, ”said Arisa. Splendid the reply of Maria De Filippi: "You did well, long live the human race".

Not only dance, music and performance but also a moment of reflection, on a theme that is very much felt in this period. That of gender equality, the elimination of stereotypes in the name of everyone's freedom of expression. Needless to say, on social media the images of the "mustachioed" Arisa have depopulated in a very short time, confirming the singer's great success not only as a talent teacher, but also as a champion of the positive body.

The evening then went live and it was up to the team of Lorella Cuccarini and Arisa to decide who to challenge. Naturally, the choice fell on the team of Alessandra Celentano and Rudy Zerbi with whom, in the last few episodes, there was open war. Especially due to the constant attacks of Alessandra Celentano, who never misses an opportunity to express herself in a very vigorous way (in particular against the dancers Rosa and Martina).

The first gauntlet immediately sparked many perplexities. Raffaele against Sangiovanni on the notes of Dangerous, a famous (and difficult) piece by Michael Jackson. A targeted choice that, as Arisa explained, did not want to show only the singing skills of the two young students, but above all their ability to be on stage. Rudy Zerbi did not take Arisa's choice very well, because according to him the piece was evidently in the chords of the first, to the detriment of the second. Emanuele Filiberto also agrees: "Michael Jackson is Everest, he is untouchable. And it was not in the Sangiovanni cords ”. But Arisa continued to deny.

The second gauntlet, on the other hand, saw the protagonists of the dancer Rosa, engaged in the double step on the notes of Ti I'd like to raise, and the singer Deddy, who reinterpreted Portami a dance by Luca Barbarossa. Here too, Celentano did not miss the opportunity to launch one of her pungent comments against Rosa: "I noticed these trees that camouflaged Rosa a little", she said, triggering the reaction of Cuccarini, always ready to defend her pupil. .

But it is with the third challenge that the situation precipitated. Alessandro performed against Tommaso in Vesti la giubba from the opera Pagliacci by Ruggero Leoncavallo. "So much for the fair gauntlet," said Celentano quite annoyed by the choice of the teacher Cuccarini. A technical and difficult performance, especially for a boy who has been studying dance for a few years and finds himself facing a qualified and more prepared one. "I do not refuse gloves, I do not allow myself to change the choreography – he continued -, I think that Mrs. Cuccarini preaches well and scratches badly".

After the performances of Alessandro and Tommaso, De Filippi asked the judges as always to express themselves on the matter. And Stefano De Martino's speech turned into yet another quarrel with the teacher Celentano, whom she knows more than well from her participation in Amici. "Changing your mind is not a symptom of weakness" – he told her -, "it is respectable to remain faithful to one's principles, but for the sake of Thomas you could not have accepted the glove".

Celentano teased De Martino with a decidedly not very tender phrase: "Stefano, thank goodness you have had another career," Celentano commented. "I told you at the time and you didn't, you wanted to be a dancer," continued the dance teacher. Ancient disagreements that seem to have remained unresolved between the two.

As announced by the spoilers a few hours ago, the dancer Tommaso was eliminated. The boy burst into tears, out of disappointment and emotion. Maria De Filippi immediately tried to reassure him: “You are good, you are young, very young. You have life ahead of Tommy ”. And then, like a tender mother, she also complimented him for his loyalty, education, commitment and courage to always say what he thinks.