Angelina Jolie witches everyone in London, showing off a look inspired by Meghan Markle (and maybe even Kate Middleton)

Angelina Jolie flies to England and witches everyone, showing off a princess look inspired by Meghan Markle.

Now the former Suits actress has become a true style icon, not just for all British subjects, but also – apparently – for Hollywood stars. Angelina Jolie knows it well, having reached London for an important event, choosing an outfit inspired by the new Duchess of Sussex. Brad Pitt's ex-wife was among the guests of honor at the Most Distinguished Order of St. Michel and St. George, a reception held at St Paul's Cathedral and bringing together personalities who stood out for their commitment social and humanitarian in Third World countries.

For years now Angelina Jolie has been fighting against the war in Syria and for refugees, which is why she could only be among those invited to the event. The actress left the United States to reach London, opting for a very particular look. Apparently Angie must particularly appreciate the style of Meghan Markle, as she chose to wear a Ralph & Russo dress, focusing on one of Harry's wife's favorite designers (she wore one of her creations on the day of the engagement).

Even the colors seem to have been "stolen" from the Duchess of Sussex: a pearl gray that highlighted the splendid eyes of the Hollywood star. To complete the look, Angelina Jolie opted for satin shoes and a very simple hat, worn on the side and with a bow. Any other eye-catching details? The neckline that gave a glimpse of the shoulders and that looks like a clear reference to the outfit by Meghan Markle at her first Trooping the Color and the gloves, which made her look like a modern Jackie Kennedy (or a mature Kate Middleton if you prefer).

The result? Angelina Jolie bewitched everyone at the event and all eyes were on her as she walked down the aisle of St Paul's Cathedral. 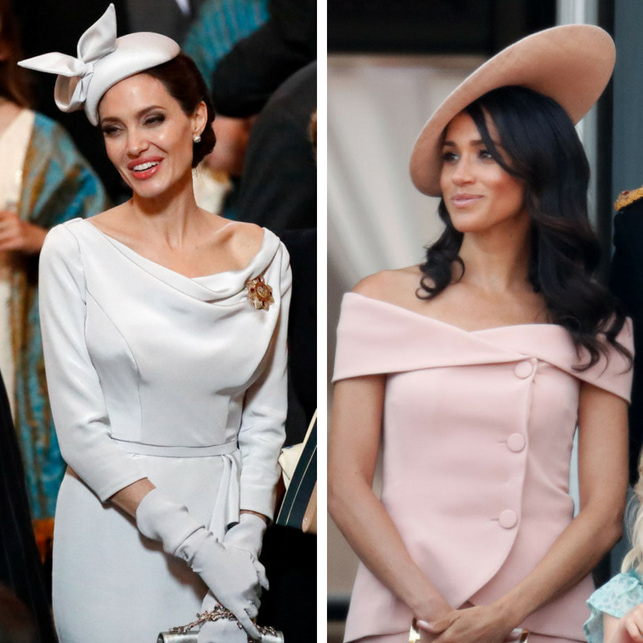