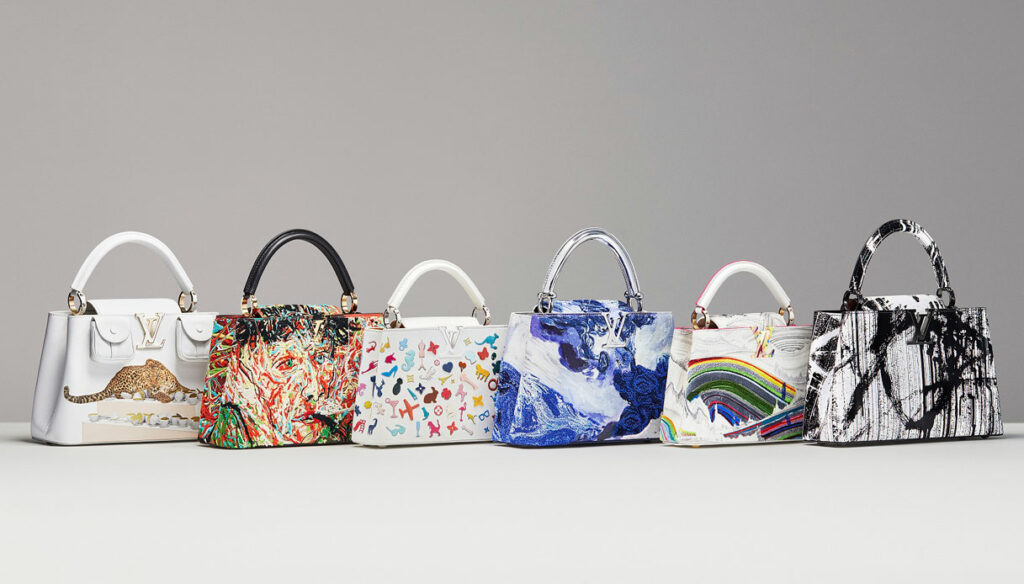 The French Maison launched the Artycapucines Collection project three years ago and now boasts eighteen pieces, six each year, to wear and collect.

For this new series, Gregor Hildebrandt, Donna Huanca, Huang Yuxing, Vik Muniz, Paola Pivi and Zeng Fanzhi sign as many bags, each with its own story to tell.

First launched in 2013 and named after Rue des Capucines, the Parisian street where Louis Vuitton opened its first store in 1854, the Capucines bag has quickly become a contemporary classic.

Creativity, fashion and craftsmanship for one of the most popular Vuitton bags. A timeless classic that is constantly reinterpreted without ever losing its original charm. Six limited edition bags, 200 pieces for each model, also made thanks to the extraordinary skills of the Maison’s artisans.

A transversal project that involves fashion, art and craftsmanship, but above all that reveals, once again, the brand’s ability to make its own style more and more attractive.
The models of the third Artycapucines collection will be available in Louis Vuitton stores around the world starting from the end of October.

Let’s find out how the six artists of this edition interpreted the Capucines bag.

Let’s start with Paola Pivi, a Milanese artist who has exhibited all over the world from New York to Rome, passing through Milan, Basel, Berlin, Venice… ..
For Artycapucines, Paola Pivi is inspired by her 2007 work: “One Cup of Cappuccino Then I Go”. Under the gaze of a majestic leopard, 30 cups and saucers in porcelain-effect paint and frothy cappuccinos take shape in delicate gold-colored lambskin, using real gold leaf. Two comfortable pockets on the front, referring to safari jackets. 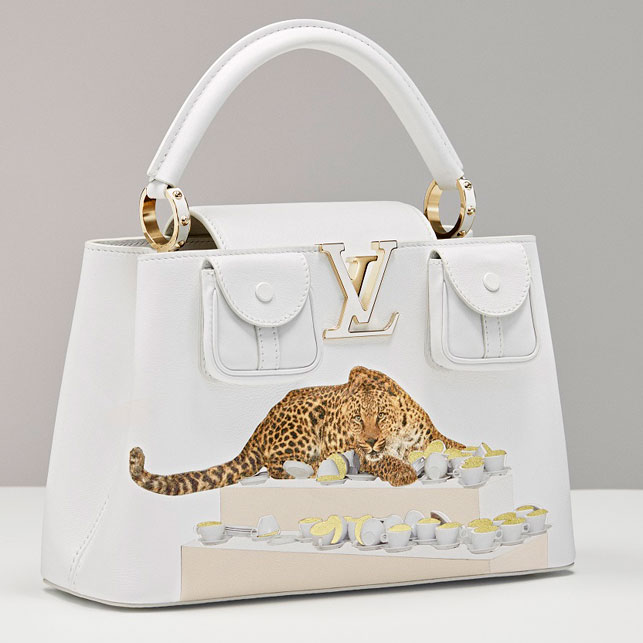 Viz Muniz, a Brazilian artist who lives and works in the United States, was also inspired by his 2019 series “Almost Everything”. Small objects or fruits in relief stand out colorful and fun on the white skin of the most pop of the Capucines. From kangaroo to pineapple, from shoes to glasses, from the Eiffel Tower to the Louis Vuitton Monogram flower, the 154 icons characterize each bag. 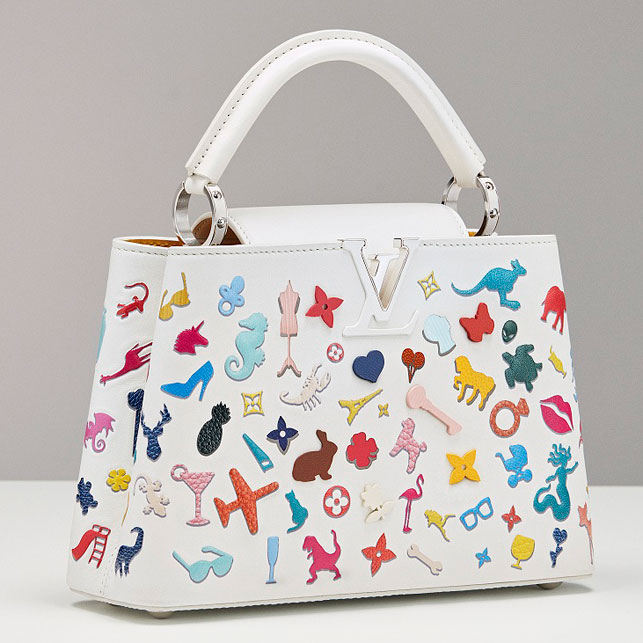 For Zeng Fanzhi, a Chinese artist who lives and works in Beijing, the Capucines bag becomes almost dramatic and takes on the tormented face of Van Gogh’s portrait. Also in this interpretation, the artist is inspired by his own work on Van Gogh and transfers the pictorial and material image, on the skin. Sophisticated embroidery techniques with threads of 42 different colors reproduce the dense brushstrokes of Zeng. 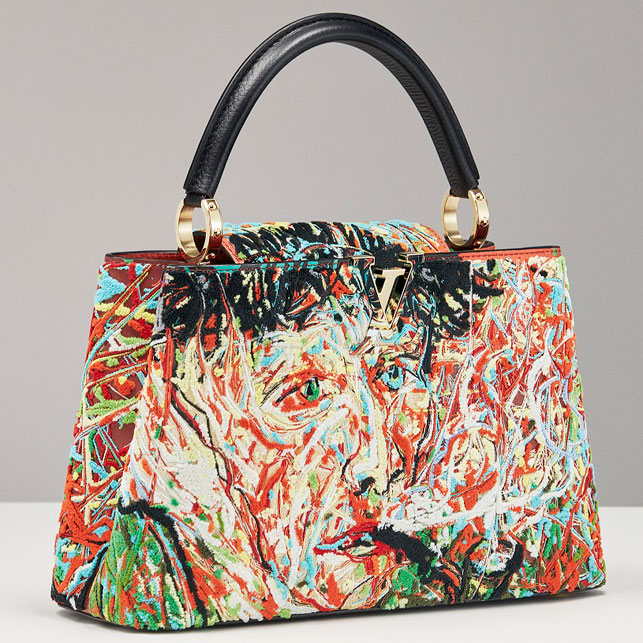 Gregor Hildebrandt is a German artist who loves vinyl records and likes to use magnetic dust from recording tape to create black and white images. Its Capacines is screen printed and the LV signature in gunmetal black is inlaid with real vinyl records. 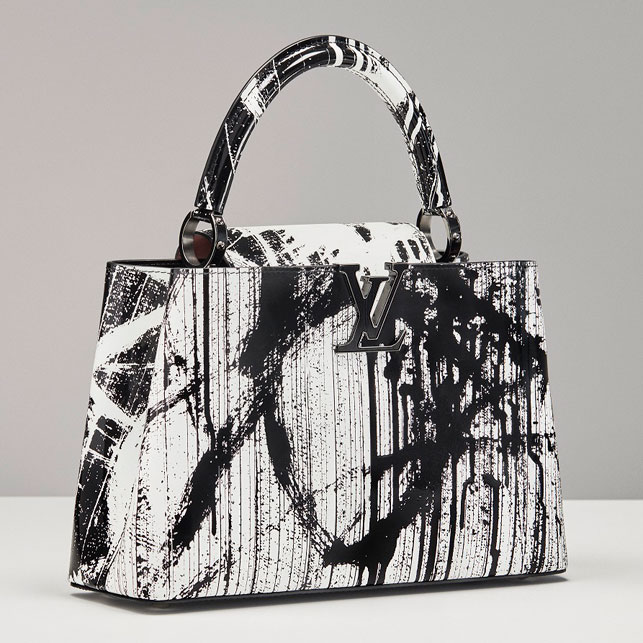 Donna Huanca works on the female body and her creation for Louis Vuitton is inspired by Cara de Fuego and MuyalJol, two of her paintings. Both works are carefully 3D printed on the white leather of the bag, together with different embroidery techniques, which reproduce the tactile effect. 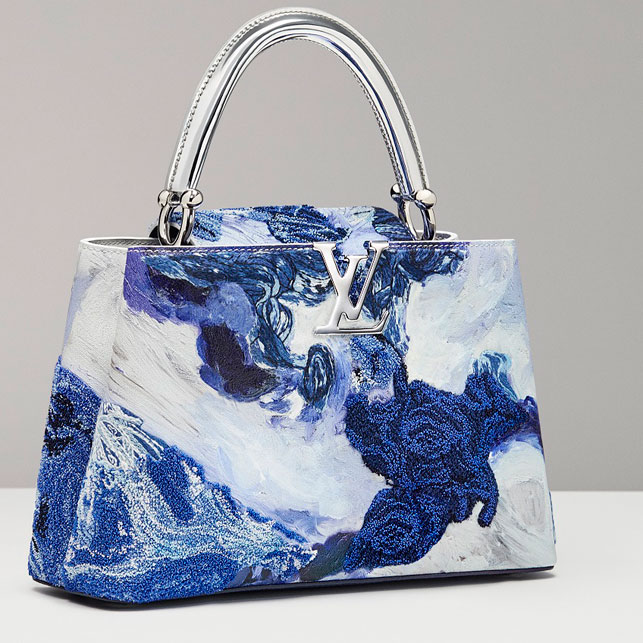 In Capucines, Huang Yuxing reworks his 2019 painting “The Colossus Hidden Deep in the Hills”. Rainbow mountains are embroidered in such a way as to simulate the sense of movement and the accidental drops of paint, so typical of Huang’s works, are reproduced with a particular bouclette stitch embroidery of metallic thread. 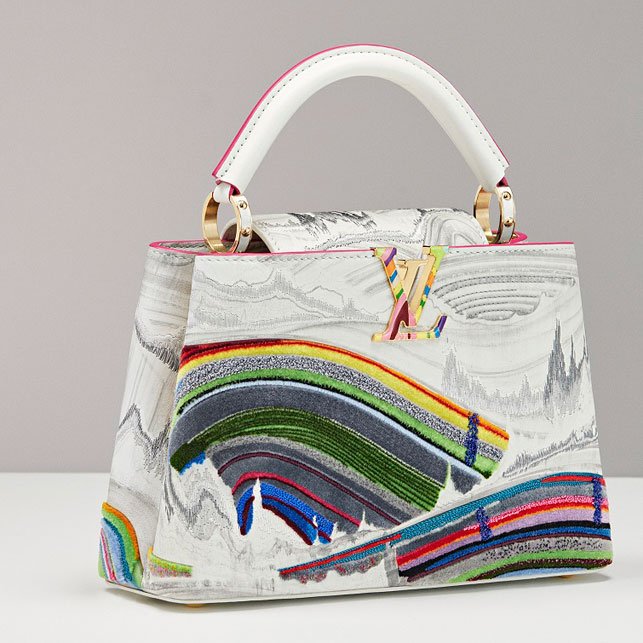