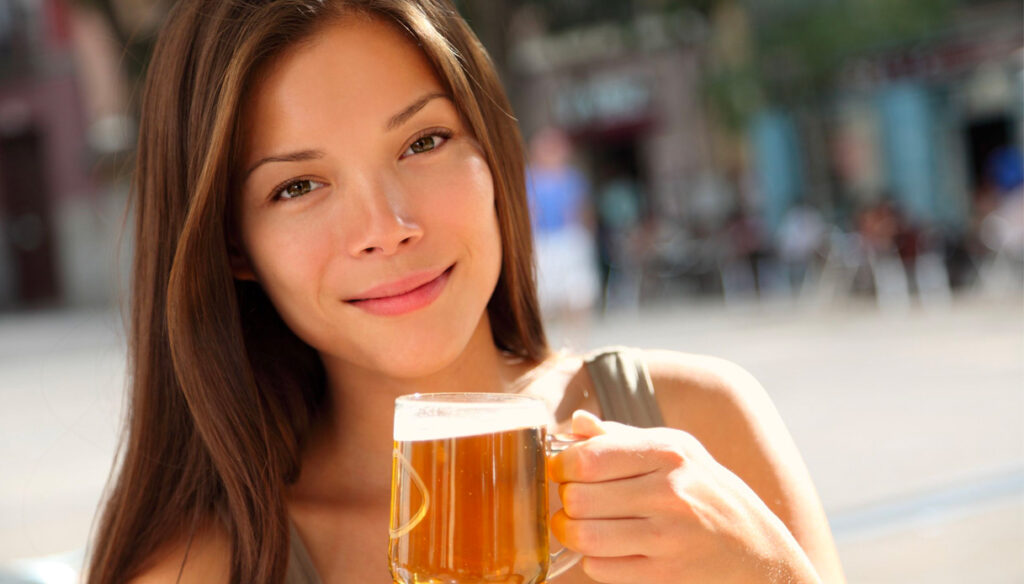 When consumed moderately, it can help fight water retention, support the skeleton and improve the beauty of nails, skin and hair.

Always called the "liquid bread" because it is based on 4 fundamental ingredients (water, cereals and yeast. And, in addition, hops), beer is not only a drink appreciated by half of Italians (according to the survey conducted by BVA Doxa for the AssoBirra Beer Information Center), but it can also be considered a food as it derives from basic foods such as cereals and water, providing our body with useful substances from an energetic and nutritional point of view capable of having a positive role for the well-being of the organism, if consumed moderately.

The balance between its reasonable dose of ethanol and the other nutrients is the dominant character of beer: the alcohol content of a pale beer, the most common, in fact, is between 4.5% and 5%. The rest is water in which mineral salts, vitamins and small amounts of other nutrients useful to the body such as amino acids and antioxidants are dissolved.

A drink / food, therefore, rich in precious properties for health:

It can be considered a prebiotic food. It is rich in inulin, a special water-soluble fiber of barley and fructoligosaccharides (FOS), beta-glucans always derived from barley, the staple food of beer. These nutrients present in solution in beer are not hydrolyzed by enzymes in the digestive tract and are not absorbed by the gastrointestinal mucosa, reaching the colon intact. Here they are preferentially metabolized by Bifidobacteria, thus contributing to the development and maintenance of beneficial endogenous microorganisms (Bifidobacteria and Lactobacilli) as their carbon source. This intestinal condition limits the presence and growth of pathogenic and harmful bacteria, such as Clostridia, Escherichia Coli …

It can help fight water retention. The water used to produce beer is a good source of mineral salts, especially potassium (70 mg in 0.20 l), which helps to rebalance the amount of sodium present in the diet and thus helps to hinder water retention, which is so frequent. in women.

She is a friend of the bones. 0.20 l of beer contains almost 70 mg of silicon, about 20% of the recommended daily dose. This mineral is able to make bones stronger, reducing the risk of osteoporosis. And in beer it is found in a form that is easily assimilated by the bones and thus increases its shape and strength.

Helps the beauty of skin, nails and hair. Furthermore, dissolved or suspended in the glass of beer, there are small quantities of nutrients and other substances which science recognizes today as a protective effect for health. Malt, hops and yeasts are a source of free amino acids, mineral salts and vitamins (B1, B2, B6, B9, B12 and niacin) which are also useful for the health of the skin, nails and hair.

How much beer can you drink in one day?

Beer is, among the spirits, the one that contains the least alcohol. An average consumption of 2/3 glasses (250 cc) of light beer per day is considered moderate, but the dose may vary based on age, sex, build and state of health. 0.20 l of medium-strength light beer (4.5% vol.) Corresponds to about half of an alcoholic unit and contains 40% less alcohol than a 0.125 l glass of wine.

Not recommended for consumption during pregnancy (the effect of alcohol, even in moderate doses, on the cells and tissues of the fetus can cause brain malformations).

Prudence also suggests refraining from drinking any type of alcoholic beverage, even low-alcohol such as beer, before driving. Reactions to alcohol ingestion can in fact vary greatly depending on the psychophysical conditions of each individual driving. However, the law sets the maximum limit for alcohol in a driver's blood at 0.5 grams per liter.

Of course not, even if you are not an adult. Adolescents are the most vulnerable consumers, as they lack neither the ability to metabolize alcohol completely, nor the maturity enough to responsibly manage an alcoholic beverage.