One of the most beautiful and loved couples in Hollywood breaks out. The farewell with a joint press release, in which they promise to continue the role of parents with love and friendship 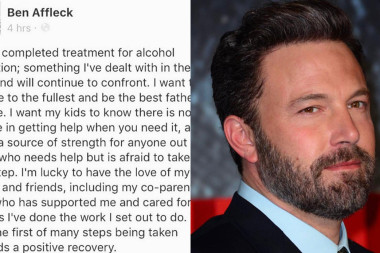 Affleck-Garner: goodbye to one of the most loved couples

We really didn't expect this. Ben Affleck and Jennifer Garner, the beloved "Bennifer", who after the "Brangelina" were one of the most admired and envied couples of the showbiz, also divorced. And, ironically, they communicate it the day after their tenth wedding anniversary.

They too did not make it and after 10 years of marriage – they got married on June 29, 2005 – and three beautiful children, Violet, Seraphine and Samuel, released a joint press release announcing the separation.

After much reflection and careful consideration, we made the difficult decision to divorce. We will continue with mutual love and friendship and with the commitment to maintain our roles as parents with our children, whose privacy we ask is respected in this difficult moment. This will be our only comment on this private matter. The family comes first. Thanks for your understanding

In recent months the rumors that gave "Bennifer" to the terminus had become increasingly insistent. But they alternated with rumors of Jennifer's alleged fourth pregnancy. As if to say, one week they were in the smell of divorce, another stork, as often happens in those parts.

Then, in the past few weeks, workers from a moving company had been spotted outside their home in Los Angeles. Fans had hoped to the end that things could go back to work between Ben and Jennifer but this has not been the case, as in the normal Hollywood tradition, where, since the times of Paul Newman and Joanne Woodward, they can be counted on the fingers of one hand couples who hold more than ten years.

The last photos of the two of them together, embraced and smiling, date back to last December. Then, in April 2015, the couple had been photographed in Santa Monica with Samuel. But, looking closely at the photos, you notice how Ben always walks one step behind Jen, his gaze low and sad. Obviously something had already broken.

For Garner, this is the second divorce after her failed marriage to actor Scott Foley. For Affleck, Jennifer had made peace after the turbulent relationship with Gwyneth Paltrow and Jennifer Lopez.

Lorenzo Gavazzi
2401 posts
Previous Post
Running, running: the benefits for the skin
Next Post
GF: Ambra Lombardo confesses to Kikò and sends a message to Tina