Bosu: what it is, benefits and exercises 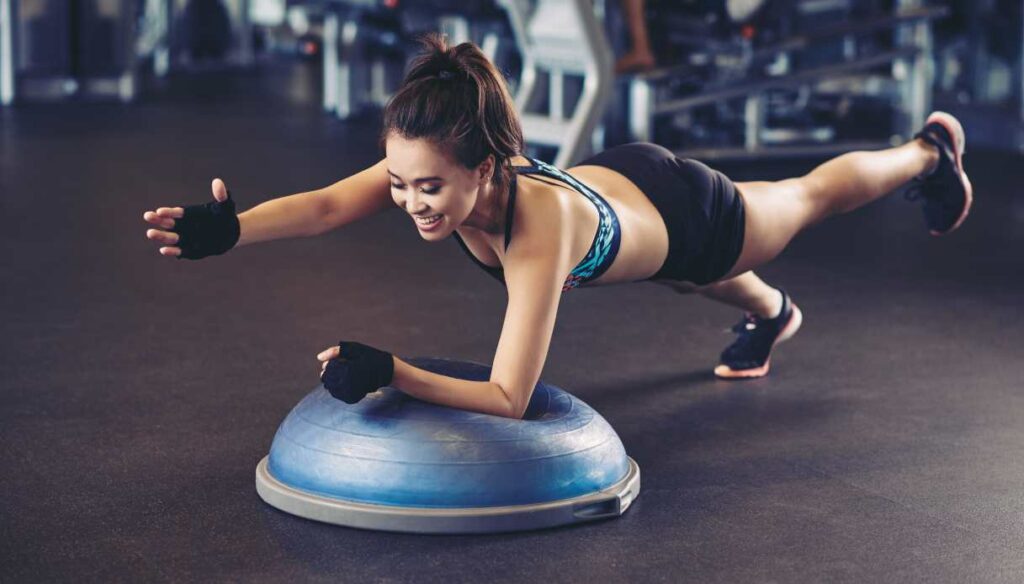 How the Bosu works and which muscles it trains. Let's see some typical exercises that improve all proprioception

The BOSU Balance Trainer is a fitness training tool, invented in 1999 by David Weck. It is also called BOSU ball or Both Sides Utilized, but often simply just BOSU. It is a rubber hemisphere fixed on a rigid platform. It is used for all proprioceptive gymnastics exercises that improve the balance and general coordination of the body. On the sides there are 2 eyelets to which the elastics are fixed which serve to accentuate the stretching and the work of balance and reinforcement. Inside, the BOSU is hollow, but well sealed, and contains air; it has an overall consistency with a reduced elastic response (it does not throw the body back totally if you put your foot on it, not like a trampoline, so to speak). There are no particular contraindications, not even in classic monopodalic exercises. Sometimes the Bosu is defined as the soft heir of the step, which further challenges the coordination and perception of the body.

The dome takes the name of "Dome" and over the years the elastic response is modified up to the recent Bosu Elite, which further stimulates the nervous system and muscle fibers. Weck has created a real system that takes the name of WeckMethod and which aims to improve the movements of the human body also through the use of new revolutionary tools including the Pro-Pulse Pulsers, which instruct the nervous system and my system. -fascial to the correct biomechanics of the movement. Very fun to use, it also takes up little space in the house compared to other tools that risk being really bulky as much as they are useful.

Due to its conformation and materials, the Bosu creates a certain instability and therefore trains balance and increases the level of knowledge of one's body. The bosu allows you to tone and train muscle strength, activating the abdominal area a lot. Both static and dynamic balance are improved and many exercises can be performed on the Bosu such as push ups, lunges, plank, squats, deadlifts, bench press, squats and a whole series of exercises that require resistance which, in the case of the Bosu, is amortized. In this way the effectiveness of these exercises is amplified, doubled. It allows you to train both arms, buttocks and legs in an effective and very invigorating way, as well as a great activation of the entire abdominal area. Exercises on the Bosu strengthen the paravertebral muscles and all the muscles near the joints, even delicate ones such as the ankles, wrists, knees. The important thing remains not to force too much on the support and not to perform traumatic movements for the entire bone structure, such as throwing weight on the soft part of the tool or pushing with excessive force.

This tool is used in crossfit as well as functional gymnastics. Absolute protagonist now in the rehabilitation and in the posturology and clinic of the movement. The official training to learn how to use Bosu follows two levels of which the first consists of a basic level of functional training and the second in a training that allows you to follow small groups.

Let's see together some classic exercises that take place with the Bosu and allow you to train and tone legs, buttocks, arms or abdomen:

Compared to traditional squats, obviously the support base is reduced, as both feet must be on the Bosu. Once on the dome, the pelvis moves back as the knees are flexed. You then get up by extending the legs and contracting the muscles after having levered on the heels. The back remains straight and the toes are turned slightly outwards, to prevent the knees from going in the same direction. It allows you to work a lot at the level of the buttocks and legs. Two sets of 15 repetitions are fine with a recovery phase between the two.

With legs apart, one foot goes to the surface of the Bosu. the hands are on the hips or in front of the chest crossed. The balance challenge lies in starting from the bent leg and then shifting the weight to the other leg while flexing it (the one whose foot is on the floor) and then returning to the starting position. It is okay to perform 3 sets of 10 repetitions for each leg, indulging with adequate breathing, inhaling when going up to exhale when descending towards the other leg. A lot of toning work on the legs but also of balance and therefore of the abdominal center.

The hands are both on the dome of the Bosu and the palms press down. The feet point towards the floor and the abdomen is always active. The buttocks are contracted and the neck remains in line with the entire spine. To increase the level, you could remove one hand and actively challenge your balance and then put it back and raise the other. Maintaining the position for at least 15 seconds allows you to strengthen the whole body and then gradually rise with the duration.

Maria Teolis
3089 posts
Previous Post
How to adopt a child, in Italy and abroad
Next Post
La Fuggitiva, Vittoria Puccini recounts the incident on the set