Canadian natives and the forgotten genocide 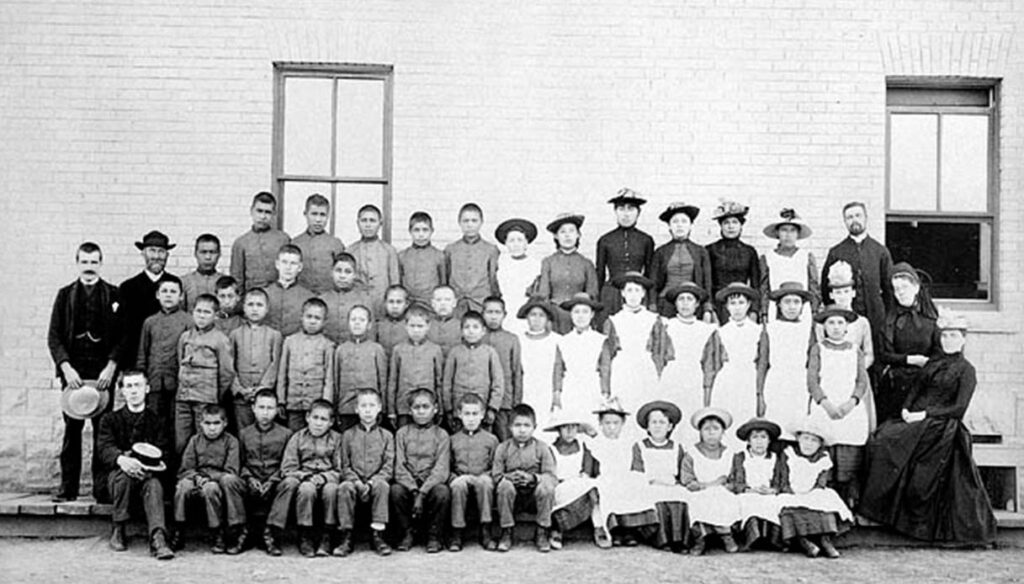 In Canada, the remains of 215 Native American children were found in the courtyard of a residential Catholic school. But the truth behind this news is even more disconcerting

One of the blackest pages in the entire history of humanity has just been brought to light by the media around the world. The Pandora's box was uncovered and brought the horror and suffocated pain of many innocent little souls. Because the news of the discovery of the remains of 215 children cannot go unnoticed.

A few days ago there was the tragic confirmation of the horrors reserved for Native Americans in Canada. The news concerns the discovery of the remains of children belonging to the Tk’emlúps te Secwépemc community, buried in the Indian residential school of Kamloops.

Founded and managed by the Catholic Church, the facility has coercively housed thousands of indigenous children, forced to separate from their families to attend residential schools. Because at the time they weren't allowed to stay with mom and dad.

The children could not escape from their destiny and from that school system that has profoundly marked several generations and the entire indigenous community. The school, one of the largest in Canada, was permanently closed in 1978, but none of the "survivors" have ever forgotten the horror they experienced.

After years of testimony, research and investigation, it emerged that most of the children who attended that institution were victims of physical, sexual and emotional abuse. Many of them, however, in addition to being victims of horror, have never returned from that hell. They couldn't hug mom and dad, they couldn't go back to the life someone took away from them because they were buried in the schoolyard. And now they are there, together, without names, documents. Without an identity.

The Truth and Reconciliation Commission, charged with investigating and revealing a government's past crimes, estimated that over 4,000 children actually died during the school years. To date, however, it is impossible to establish the number of victims. Many of them allegedly lost their lives because of the abuse they suffered, mistreatment, but also due to illness and lack of adequate medical care.

The horrors committed within residential schools are not new to the community of Tk'emlúps te Secwépemc and other indigenous communities. What is certain is that such a frightening number has shocked everyone: it is the first time that a loss of this magnitude has been documented.

Some survivors told themselves after this discovery that inevitably reopened an open wound that never healed. “I lost my heart, it was so painful. And finally knowing that the rest of the world knows what was happening there also gives me relief, "said Harvey McLeod, who attended school for two years in the late 1960s, in an interview with CNN.

Because for too long that genocide, against the smaller and lesser known communities, has been forgotten. Thanks to the opinion on Canada, which persists in the collective imagination, which has always been considered an exemplary country by us Westerners.

The stereotypical image of a territory respectful of human and civil rights, of a country that has become the spokesperson for social equality and the freedom of all has been dismantled because in reality, Canadian natives have never been recognized those rights humans who should belong to everyone.

And it is certain that the news of the discovery of the remains of those children has shocked everyone, but it is also true that the testimony of what happened to the indigenous peoples is real, and has been ignored for too long. Because that of children torn from their families, and from their lives, was not just a macabre tale of horror to be told to scare the little ones: at the beginning of the twentieth century fifty thousand children were interned and more than 40% of these have lost his life.

In 1907, the Montreal Star newspaper was already talking about genocide. Yet the violence, rape, abuse and murder have been questioned, even when those who had experienced that horror on their own skin, confessed. Because on the other hand there were those who minimized, speaking of that information as a simple result of a journalistic exploitation or a disinformation campaign. Yet those crimes had been committed. Yet those children were no longer there.

But no one, in all these years, has denounced, or screamed until it tore through that idyllic imagery that the world had of Canada. One wonders how so much silence was possible, but just take a look at the old Canadian legal system to find the answer to the question that everyone is asking today. And we anticipate that it is not comforting.

The Federal Indian Act, Canada's leading law dealing with registered Indians, their gangs and the reservation system adopted in 1876, gives the Canadian government the exclusive authority to legislate on Indians and land reserved for Indians. It is a law that, without too many words, reaffirms the legal and moral inferiority of the indigenous people. Moreover, it was the same to establish the system of residential schools.

And if that's not enough, the Gradual Civilization Act of 1857 puts the icing on the cake. The law obliged indigenous families to transfer all the protection rights of their children to Christian residential schools, anyone who refused to do so was punished with arrest and economic sanctions.

From the confidential files of the Ihraam court, containing the statements of confidential sources 12-14 June 1998, it emerged that:

Some sort of a parole agreement was in place for many years: churches supplied us with children from residential schools and we instructed the RCMP to deliver them to anyone who needed a batch of experimental subjects: usually medical, sometimes elements. of the Department of Defense. Catholics did this at a high level in Quebec, when they transferred boys on a large scale from orphanages to asylums. The aim was the same: experimentation. In those days the military and intelligence sectors gave a lot of grants: all that had to be done was to supply the subjects. Church officials were more than happy to comply with those requests. It wasn't just residential school principals who took bribes from this traffic: everyone took advantage of it, which is why it has been going on for so long; it just involves a lot of tall poppies.

Not just sexual violence and emotional abuse, Native Canadian children were the subject of experiments, and survivors confirmed this. The documentary Unrepentant: Kevin Annett and Canada's Genocide, reports some of the most painful stories of those children who carry indescribable pain in their hearts.

Kevin Annett, as a reverend, clashed with the Church for its desire to shed light on the events that occurred in residential schools, talking about a genocide committed by the religious leaders of these institutes. Here are some of the most heartbreaking survivors' testimonies from the documentary:

“When I was six, right in front of my eyes I saw a nun kill a little girl. It was Sister Pierre, but her real name was Ethel Lynn. The little girl he killed was called Elaine Dik and she was five years old. The nun hit her violently behind the neck and I heard that horrible snap. He died right in front of us. Then the nun told us to step over the body and go to class. It was 1966 ».
Steven H.

“I was only eight, and they sent us from Alert Bay Anglican residential school to Nanaimo Indian Hospital, the one run by the Unitarian Church. There they kept me in solitary confinement in a small room for more than three years, like I was a lab rat, giving me pills and giving me injections that made me sick. Two of my cousins ​​made a lot of noise, screaming and rebelling every time. So the nurses gave them injections, and they both died right away. They did it to make them shut up ».
Jasper Jospeh Port Hardy

“My sister Maggie was thrown by a nun from the third floor window of the Kuper Island school, and died. Everything was covered up, nor was any investigation carried out. At the time, being Indians, we couldn't hire a lawyer and so nothing was ever done. "
Bill Steward 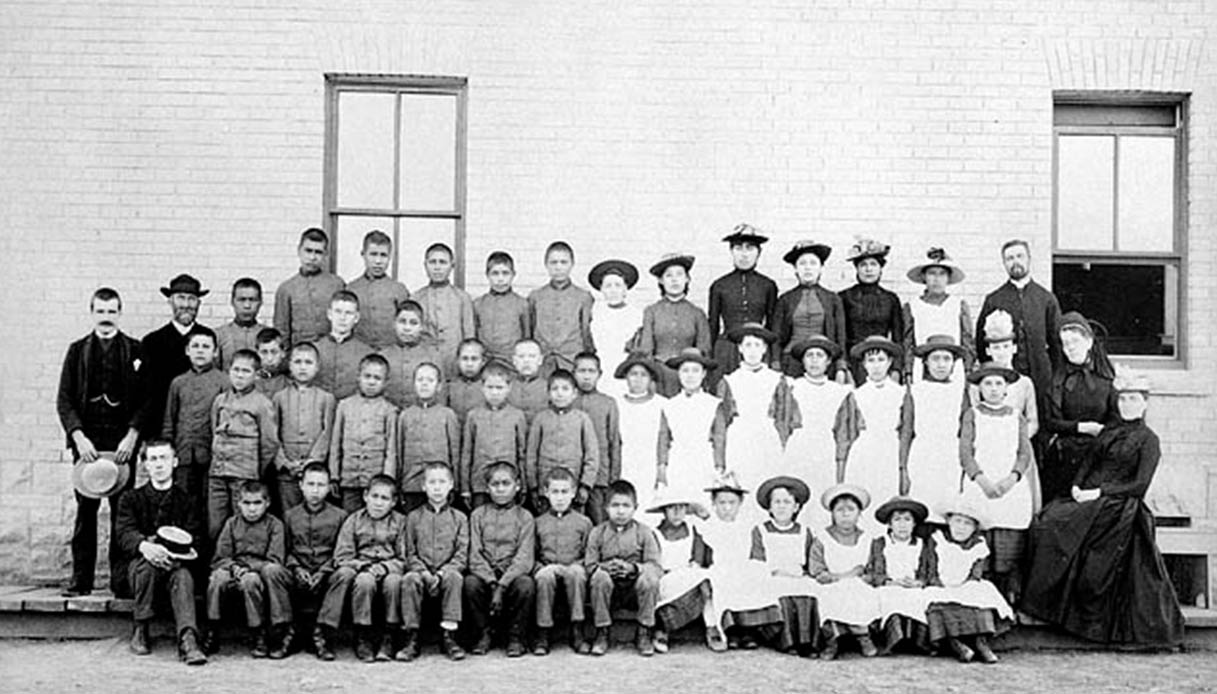 Lorenzo Gavazzi
2591 posts
Previous Post
Isola, the tears of Ignazio Moser and three things that (perhaps) you have missed
Next Post
Today is another day, Susanna and Carlotta remember dad Gigi Proietti
You must be logged in to post a comment.
Menu