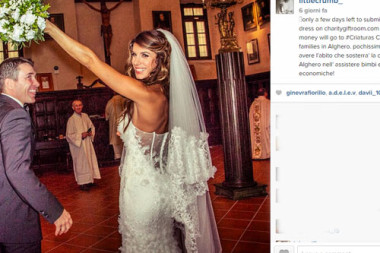 The wedding of Elisabetta Canalis and Brian Perri: the photos

For a few minutes we feared that it would have to be done all over again. Few checks and the alarm has returned: Elisabetta Canalis and Brian Perri will pay a fine of two hundred euros to the Municipality of Milan, where the former vellum resides, for the forgetting that has put the validity of the wedding at risk.

Eli, who knows if for the final acceleration, he would have neglected the documents chapter, forgetting to have the publications posted. A forgetfulness that could have blown everything (or almost) and that will be resolved with a modest amount.

But the biggest disappointment stems from the figure reached with the auction on Charitystars of the dress signed by Alessandro Angelozzi Couture. A certain Letizia was awarded the dress, for an almost popular sum: 5500 euros (donated to the Criaturas association of Alghero). A bargain if we consider that the value of the dress is around 15,000 euros.

Chantilly lace, embroidery, train, cape and veil for Canalis who on the wedding day was admired – and not a little – for that creation. A dream that, on balance, unfortunately was not so appreciated by users.

Lorenzo Gavazzi
2547 posts
Previous Post
Who are the Duo The Show, competitors of Beijing Express
Next Post
Caterina Balivo, Riccardo Fogli confesses to his wife Karin Trentini in Vieni da Me