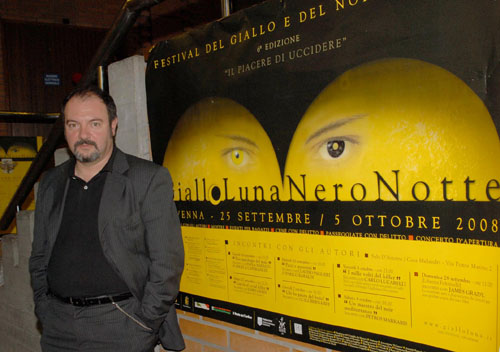 Carlo Lucarelli is a well-known Italian television personality, here is all the useful information on the life and career of this famous conductor

Carlo Lucarelli was born on October 26, 1960 in Parma. This character has played a fundamental role in the Italian television scene, as he is not only a well-known journalist and writer, but also a very famous television host and director. He is the son of a particularly recognized hematologist named Guido. Lucarelli completed his studies at the Liceo Classico Torricelli in Faenza. He made his literary debut with the yellow "Carta Bianca" published in 1990. It is a work that was immediately a great success and was particularly appreciated by all the Italian public. It is, in fact, one of the first masterpieces of Carlo Lucarelli, since he later gave birth to further police and noir works. Thanks to his strong talent, Carlo Lucarelli quickly became an important and appreciated person abroad. Lucarelli is in fact particularly known for this genre as he perfectly manages to convey emotions and at the same time to capture the reader with the right suspense. Among his other high-level works there is "Almost Blue", which has become a real best seller from which a noir novel and a film were also drawn. In addition, the collaboration with Dario Argento for the screenplay of the film "I have no sleep" of 2001 did not go unnoticed. Carlo Lucarelli was therefore an important character for the Italian television scene, as in addition to dealing with the screenplay of various films, he also worked in the field of journalism. Specifically, he has collaborated for numerous magazines and newspapers including Il Messaggero, L’Europeo and Il Manifesto. His important writing skills have led the journalist to win various literary awards, thanks to which he has gained more and more notoriety and appreciation from the Italian public. During the course of his career, the conductor has devoted himself to numerous television activities. Among his first experiences stands out the collaboration for a transmission conducted by Adriano Celentano which Lucarelli has dealt with in the role of author. Subsequently, the journalist reached the pinnacle of success when he became the host of the famous Blu Notte broadcast aired since 1998. He also dealt with the signature for the subject for the comic of the number 153 of "Dylan Dog". In 1999 he officially became the host of the Blu Notte – Italian Mysteries program which during the first edition had a different name, or "Mystery in Blue". The latter broadcast aired in prime time on Rai 3 and focused on some insights into the various news episodes, as well as multiple investigations into the serious events and murders that characterized that period of Italian history. Thanks to this important function and its marked ability in the world of thrillers and thrillers, the broadcasts became particularly popular and appreciated by all the Italian public. Subsequently, Carlo Lucarelli also worked on the screenplay for various shows of medieval celebrations. Having quickly become an important character in the field of writing and literature, Lucarelli decided to found "Group 13", or an association of noir novel writers from the Romagna region, also dealing with the online magazine "Incubatorio 16". He was a well-known creative writing teacher at an institute in Turin and a prison in Padua. As a result of these distinct experiences, Carlo Lucarelli disappeared from the television scene for some time. But 2006 marked his return to TV as the creator of the drama "Inspector Coliandro". After just two years, a new novel of his was released which immediately met with great success, namely "The eighth vibration". His love for writing also prompted him to found "Bottega Finzioni", an institute dedicated to creative writing based mainly on literature, projects for children and young people, as well as various fiction. But in 2012 the turning point in the life of Carlo Lucarelli occurred in that he became the father of two twins. All that remains is to wonder how his life has changed from detective novels and television programs to the dads of the little ones. The conductor has not missed an opportunity to release some information related to this important event of his life. In fact, it is the writer himself who highlights the importance of the role of father who finds himself living this new adventure that he will carry on for a lifetime. Specifically, the writer states that having a child means dividing important tasks correctly in two or with more people such as grandparents, while having two twins means keeping them under control numerically and on equal terms. So Lucarelli, father of twins, explains that this role also implies carrying out all the activities that the mother does, such as changing diapers and being close to the little ones when they cry. In fact, he adds that his life has changed radically, stressing that it is not just a matter of time, but above all of thought.