Chamomile: the sweet and effective remedy for well-being and relaxation 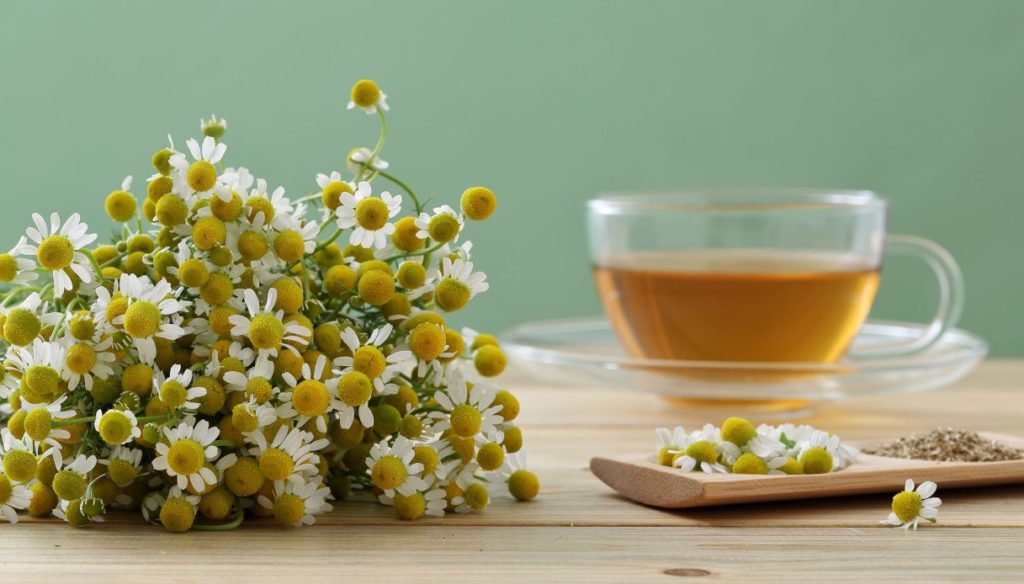 To relax but also to soothe belly pains, chamomile is an effective natural cure for both adults and children. Several studies have highlighted the benefits for the health of the whole organism

Chamomile is probably one of the best known and most loved "grandmother's remedies". Associated with the idea of ​​delicacy and calm, this plant (from the scientific name Matricaria recutita) actually contains many more beneficial properties than those commonly attributed to it. This is confirmed by the numerous scientific studies that have analyzed its curative effects both on anxiety and insomnia, and on different pathologies such as type 2 diabetes.

Where is the chamomile and how to harvest it

The chamomile plant, with its characteristic white flower, is quite recognizable and blooms between May and September on very sunny soils. You can find it both in the hills and in lowland areas. Its varieties are two: the Matricaria recutita, that is the common chamomile and the Chamaemelum nobile, called Roman chamomile.

A trick to recognize the chamomile flower is to observe its petals: they must look downwards! If you are lucky enough to come across a chamomile plant you can collect the flowers and let them dry in a dry place (until they crumble in your hands) then storing them in a glass jar, to prepare excellent and regenerating infusions with beneficial properties.

The nutritional properties of chamomile

The flowers of the chamomile plant are rich in properties for health and well-being as they contain an excellent amount of antioxidants, flavonoids and even terpenoids. The dried flower, in fact, has a high content of linoleic acid, oleic acid, quercetin, rutin, choline and mucilage. So much so that the plant, in the form of herbal tea but also in mother tincture, dry extract or ointment for external use, is used to soothe symptoms related to inflammatory states, painful spasms, menstrual cycle disorders, gastrointestinal problems (including reflux and ulcers), insomnia and anxiety, inflammation and irritation of the mucous membranes, irritated eyes.

Are you on a diet? Don't worry, the calories in a chamomile tea are negligible if not sweetened. In fact, 100 grams of herbal tea provide almost 1 kcal. Obviously, if the infusion is sweetened, the caloric intake will be very different depending on the type and amount of sweetener used.

Sweet remedy for anxiety and insomnia

One of the most recognized properties of chamomile is its sedative action. The latter is given by flavonoids and, above all, by a "magical" compound: apigenin. To obtain a relaxing effect, chamomile can be used in the round. Drink a very hot infusion several times a day, use the essential oil in the bath water or in the aroma diffuser, dissolve the essential oil in a neutral base (sweet almond oil or shea butter) for relaxing massages and decontracting. The recommended amount of pure essential oil for external use (to be used only diluted) is about 10 drops.

To prepare a chamomile infusion you can use the ready-made sachets, following the instructions or, if you have dried flowers available, infusing about 20 grams per liter of boiling water for no more than 10 minutes. And, during the brewing time, remember to cover the bowl.

Chamomile is an exceptional natural remedy with anti-inflammatory properties. The credit goes to an incredible pool of antioxidants. A study conducted by a London team and published in the Journal of Agricultural and Food Chemistry showed that the use of chamomile, even externally, can tangibly soothe inflammation thanks to its powerful antioxidant activity.

Chamomile as an anti-inflammatory can be taken both in the form of an infusion and in aromatherapy in the form of essence. In addition, there are numerous chamomile ointments on the market that help very effectively to manage the discomfort associated with skin inflammations.

A panacea for the stomach and intestines

Among the most powerful and beneficial effects of chamomile, we certainly find its ability to bring relief in case of gastrointestinal disorders. Its antispasmodic activity helps in case of digestive difficulties, gastroesophageal reflux, colitis and menstrual pain. Chamomile is a very suitable remedy even in the presence of flatulence and intestinal gas, even helping to deflate the belly.

Among the most interesting studies concerning chamomile, very significant are those dealing with glycaemia. In fact, it has been found that the consumption of chamomile helps to control blood sugar levels and the plant can be a fantastic ally in the presence of type 2 diabetes. A study published on the Nutrition foundation of Italy has in fact found that chamomile is able to favorably influence carbohydrate metabolism.

Research analyzing a possible anticancer effect of chamomile is still under consideration but the results on some recent studies bode well. For example, a study published in the Journal of the Federation of American Societies for Experimental Biology showed a reduction in the development of cancer cells linked to certain cancers: prostate cancer, breast cancer and melanoma. It seems, in essence, that chamomile selectively inhibits the growth of cancer-type cells and instead does not exert this function on healthy cells.

In case of conjunctivitis with red eyes, or even only in the presence of irritation due to external agents, chamomile is portentous. In this case its use is external or topical. A highly concentrated infusion of chamomile is prepared, left to cool and then applied to the eyes through soaked cotton tablets. If you prefer, you can use the chamomile sachet left to cool directly as a compress.

Finally, if you have sensitive skin with a tendency to redden, you can prepare an all-natural tonic with chamomile infusion and pat it (once cold) on the face that has just been removed and cleansed. The same advice is also valid in the presence of conjunctivitis or skin irritations in children.

One of the pluses of chamomile is the absence of side effects and contraindications, even in the treatment of disorders in children. The only contraindication is linked to the presence of any individual allergies to the plant.

Maria Teolis
2820 posts
Previous Post
We who read the Cioè (who turns 40 today)
Next Post
Who is Donatella, Daria Bignardi's sister