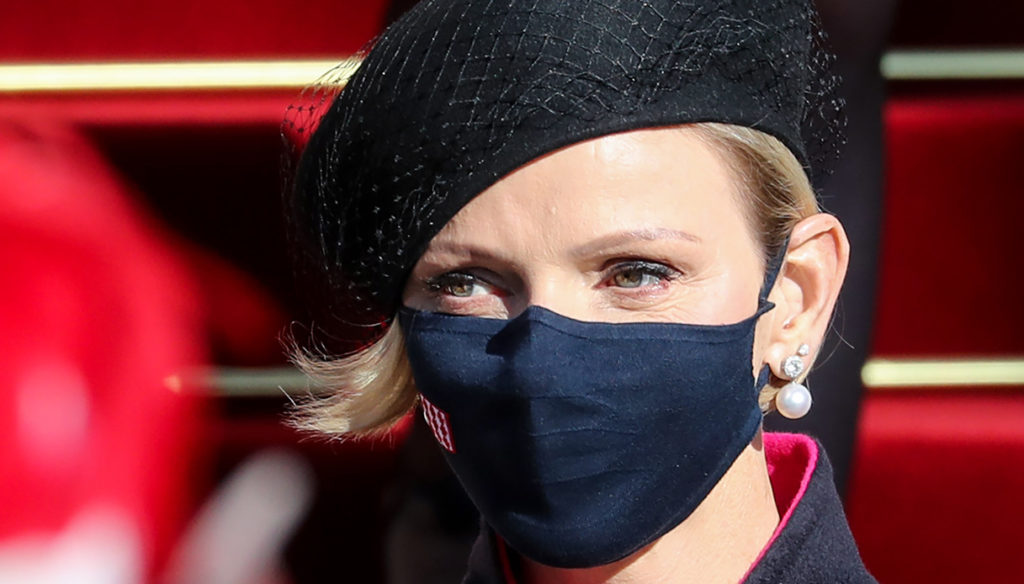 Charlene of Monaco in black is the most beautiful in the Principality. The twins are a blast but everyone notices the absence of Charlotte Casiraghi

Charlene and Albert of Monaco, great protagonists of the National Day of the Principality of Monaco which is celebrated on November 19th. The Princess particularly fascinated in black with a very distinctive overcoat, overshadowing all the others. While the absence of Charlotte Casiraghi, the only one of Carolina's children not to be present at the event, did not go unnoticed.

Although the event was held in a small format, due to the health emergency, Charlene and Albert of Monaco were perfect hosts. The couple along with other members of the Monegasque family attended the traditional ceremony in the cathedral. For the occasion, the Princess wore a black look, indeed black and gray were the dominant colors of the women's outfits.

Charlene's outfit, however, has an extra touch. Alberto's wife showed up in a long black coat, edged in fuchsia, with open sleeves along the wrists from which long black tulle gloves emerge. The look is completed by a beret hat with a veil that looks great on her, and a pair of diamond and pearl earrings that look a lot like those worn by Kate Middleton for Remembrance Day.

With her are also her children Jacques and Gabriella, born in 2014. The twins, as always, are the protagonists of the scene, fun and hilarious. Gabriella wears a black dress with fuchsia edges, perfectly coordinated with her mom's outfit. While Jacques wears the military uniform with a plumed hat, like father Alberto. And he too does not exist to salute as a soldier, like the grown-ups.

Carolina of Monaco also chooses black for her suit with white edges like gloves. And it doesn't bother hiding gray hair. Very elegant as always Beatrice Borromeo, wife of Pierre Casiraghi, who wears a classic black suit, like her daughter-in-law Alexandra from Hanover wearing a black coat. While Tatiana Santo Domingo, wife of Andrea Casiraghi, prefers a gray maxi coat like the skirt.

The accessory of the moment is the high velvet headband, the modern replacement for the hat, made trendy by the crowned heads like Kate Middleton and now by Tatiana and Beatrice.

The only one to break with the monotony of gray-black is Melanie Antoinette de Massy, ​​second cousin of Albert of Monaco, who wears a pink coat with little success.

Great absent from the traditional Monegasque festival is Charlotte Casiraghi who recently deserted all the fundamental events of the Principality. Ever since she married Dimitri Rassam, Carolina's daughter is increasingly distant from Munich and prefers philosophy to social events.

Giovanna Pirri
4617 posts
Previous Post
Angelina Jolie loses to Brad Pitt in court
Next Post
Veera Kinnunen: “I saw myself ugly and fat”. The detail of the past