On the eve of the release of the new Fedez album, Chiara Ferragni on Twitch spoiled some phrases contained in the album 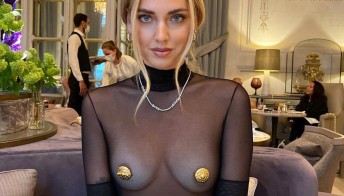 Chiara Ferragni: her looks at the 2021 fashion weeks

He is not new to the spoilers for which, last winter, he almost risked being disqualified from Sanremo. And so Fedez on the eve of the release of his new album “Inhuman” during a live on Twitch spoils some phrases contained in the album said (and mixed) by his wife Chiara Ferragni.

The influencer plays along until he realizes he has said too much and points out to Fedez that “Then no one will listen to the record”, threatening him at some point to leave the live broadcast. The name of the Twitch channel where the rapper talks freely with his followers during live shows is called Zedef and it is not uncommon to find Chiara Ferragni next to him.

The live fight between Chiara Ferragni and Fedez

Just a few days ago, during another live episode always on Twitch, the couple indulged in a bickering that did not go unnoticed. During the live on Tuesday 23 November, the digital entrepreneur filmed her husband, bursting out: “See you next, I’m leaving. Really. It’s a horrendous thing “.

What was the reason for the altercation is not a mystery. The Milanese rapper had in fact let himself go several times to a noisy burp. And so Chiara Ferragni took back her husband also because: “Even Leo now does it so that you continue to burp”. And while the singer continued to laugh, the woman threatened several times to leave the direct before ending the discussion with a categorical: “Enough”.

Last summer, the quarrel about the yacht was reported in the newspapers

Many will remember the quarrel that saw the Ferragnez as protagonists at the end of last summer: a very hard fight caught by the paparazzi. The magazine Chi published the photos that portrayed the quarrel between the two on board the luxurious yacht of their friend Diego Della Valle on the Amalfi Coast.

According to what was later declared by the couple, it was a quarrel caused by misunderstandings related to family reasons, issues that can arise in any couple. Fedez said: “Ok, it’s true, we had a really bad fight. But we clarified before leaving, before returning home here in Milan “.