Great joy for Christina Ricci, the family has expanded with the arrival of a tender little frugoletto. The actress became a mother for the second time and shared on Instagram the first images of little Cleo, born of love with the hairstylist Mark Hampton, thanks to whom she experienced a real rebirth after the tormented divorce from the ex husband.

Christina happy on Instagram for the birth of Cleo

She had done so by announcing the pregnancy complete with photos of the ultrasound, so they could not miss the Instagram posts dedicated to the happy event. Christina Ricci’s social profile exudes emotion and happiness at the birth of her baby girl, whom both she and her partner (now husband) Mark Hampton tenderly call “Baby Cleo”.

“Baby Cleo is here – wrote the actress on Instagram – we are so in love with her, she also has the most incredible dad imaginable”. And it doesn’t seem strange that she wanted to turn a thought to her Mark, the man who made her reborn after a dark period, marked by the difficult divorce from ex-husband James Heerdegen, accused of domestic violence.

A little girl with a “royal” name

Even Mark Hampton did not spare himself between posts and stories on Instagram. The new father shared the joy for the birth of his daughter, revealing some more details in this regard. “My heart exploded – wrote the hairstylist -. Christina and Baby Cleo are doing great, we are all resting after such an eventful morning ”.

Then she added “Welcome to the world of Baby Cleopatra Ricci Hampton”, admitting in subsequent stories that she has never cried so much. The name that the couple has chosen for the small, majestic and regal one has certainly not gone unnoticed. Only the best for their sweet princess.

When the actress announced the pregnancy, the relationship with Mark Hampton was practically unknown to everyone. It was known about her dark period after the long and troubled divorce from her ex-husband, but on that occasion Christina Ricci wanted to shout her joy to the world. Thanks to the hairstylist of the divas Christina has finally found serenity and for this reason she has decided to take the big step.

Christina and Mark got married last October, with a ceremony that saw her radiant and with a decidedly unconventional look. The actress, in fact, avoided the classic wedding dress, preferring a total white suit with shirt and trousers. The most tender thing is that the two newlyweds have decided to get married dressed in the same way. What can I say, a truly fantastic couple! 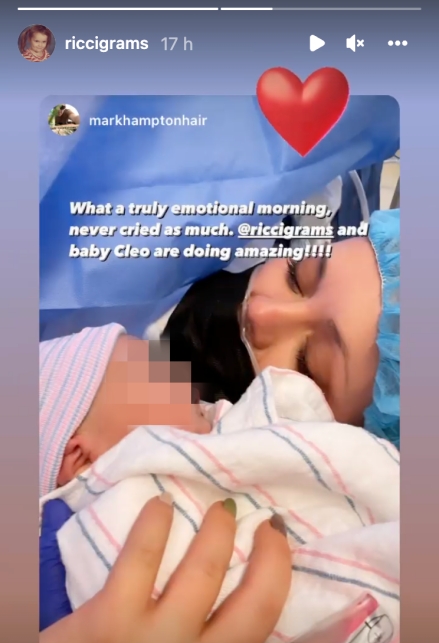