Costanza Caracciolo tells the birth on Instagram: “I was trembling and I was alone. But it was magnificent " 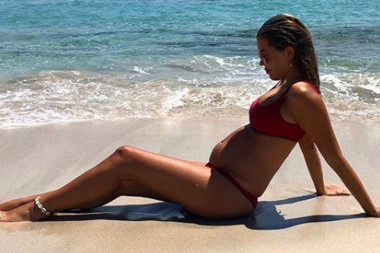 Bobo Vieri and Costanza Caracciolo, the story of their love

Costanza Caracciolo recounts the birth of Isabel and the birth that took place away from Bobo Vieri, her husband and dad of the little girl. The ex-veil of Striscia la Notizia gave birth to her second daughter, who arrived a short distance from her daughter Stella.

The announcement of the happy event was given by Christian Vieri who published a pink bow on Instagram, revealing the girl's name and declaring her love for Caracciolo. After a long silence, Costanza published a post on Instagram in which she told her birth, faced alone, with many fears, but also with the support of great professionals and the awareness of the feeling that binds her to the former footballer.

“No one would have believed that we would have faced such an important moment on our own – Costanza wrote, turning to little Isabel -, without your dad, without family and friends, but I must say that we did really well. The previous birth was not easy, yet on the outside everything was apparently so beautiful. Yesterday, however, on the way, while Daddy accompanied me, it was all very strange, empty streets, deafening silence and I trembled at the idea of ​​having to face everything alone ".

“Instead it was a magnificent birth – the model recalled – to the sound of music, with an almost all-female team and it went very well, you were born, joy and light we needed. Pretending nothing about what's going on out here is impossible, but for 24 hours I didn't think about it and it was great. " Then a thought for Vieri, a great love of his life, whom he married in 2019 and who has once again proven himself up to the situation. "I thank my husband Christian Vieri who took care of me and Stella to the last, enduring me for my constant paranoia for fear of childbirth. I thank all the friends who supported me with messages and calls before and after ".

Barbara Catucci
11963 posts
Previous Post
Prince Charles speaks for the first time since the announcement of his infection
Next Post
Francesca Tocca, goodbye to Raimondo Todaro: the message for Valentin on Instagram