Crunch: how to do the abdominals correctly? 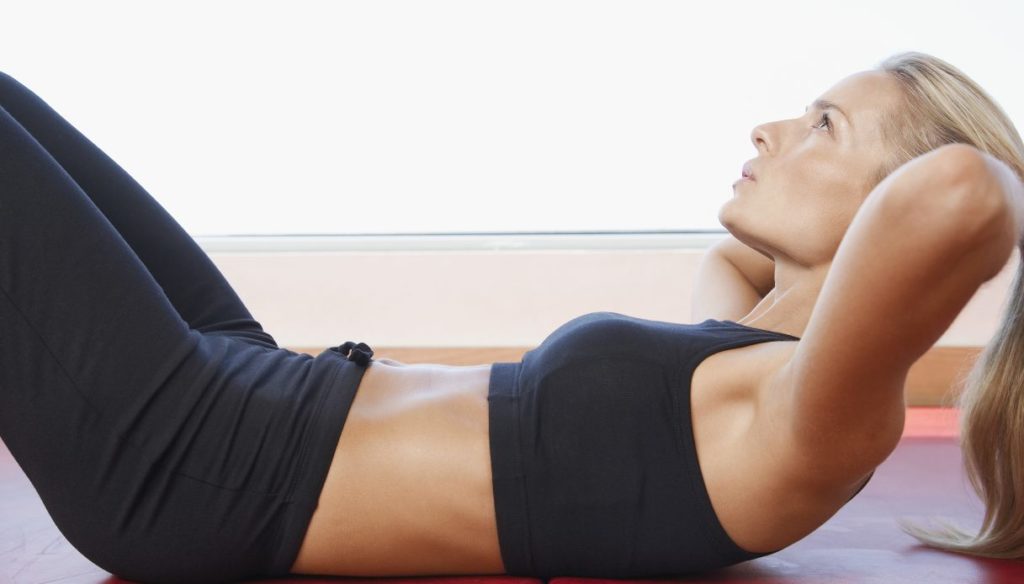 To have a sculpted abdomen, here are ground crunches. How to perform them, which muscles tone, how many to do, the various types and advice in case of pain

How to perform the crunch on the ground

The crunch is one of the best known bodyweight exercises for those who want to strengthen the muscles of the abdomen. It can be performed in small spaces so it is also suitable for individual workouts at home.

The starting position is lying on your back, with your legs bent and feet on the ground hip-width apart and about 20 centimeters away from your buttocks. Take a slight retroversion of the pelvis to adhere with the lower back to the ground and hold the pelvis still. Better to be on a mat so as not to stress the lower back. You bring your hands to your head, with your elbows wide open, but only placing your fingertips behind your ears. The gaze remains aloft.

With an exhalation, the abdominal muscles are contracted and the torso is flexed, by about 30 degrees, thus lifting the shoulders and shoulder blades (for those who already have good muscle tone) from the ground, without bringing the chin close to the sternum . With an inhalation you return to the ground, slowly and maintaining the activation of the abdomen.

Be careful not to do the apnea exercise: breathing is essential in performing crunches, because other bands of the abdominal muscles, called transversus and obliques, deeper than the rectus abdominis, which is the most involved muscle, are activated in the expiratory phase and contribute to a better activation of the rectum and to protect the back from injuries. Also be careful to keep the pelvis firm on the ground, as well as the lumbar area, in order to isolate the movement in the abdomen, without involving the hip flexor muscles.

Which muscles I train with crunches

The crunch is the quintessential exercise that trains the rectum of the abdomen, also known as six-packs in English, or "the turtle" in Italian. It was designed to isolate exactly this muscle, so if done correctly, it mainly strengthens this. What we commonly call abdominals are actually a set of muscles organized in several layers, of which the rectum is the most superficial and develops vertically in the center of the abdomen. The main movement that it allows to do is to flex the back, bringing the sternum closer to the contracting pubis.

However, through the variants of the ground crunch it is also possible to train other abdominals, in particular the external obliques and the internal obliques, the latter located deeper than the others, which have a stabilizing function on posture, as well as a greater involvement in breathing. . In fact, toning the abdominal muscles is useful not only for aesthetic reasons in seeking a flat stomach, but also for reducing postural imbalances such as hyperlordosis.

To the movement with the shoulders is added that with the legs. The feet are off the ground and the knees at 90 degrees. In the starting position, torso and femurs are at right angles, in contraction the upper part of the torso is raised and the knees approach the chest, always keeping the coccyx and lumbar area on the ground.

Like the classic crunch, but with greater involvement of the oblique muscles of the abdomen. The feet are on the ground and, after lifting the shoulders, a twisting movement is made with the torso turning towards one leg at a time. Inhaling you return to the ground, exhaling shoulders up and twisting to the other side.

With touch to the ankles

It starts as in the classic crunch, only with the arms along the body on the ground. On exhaling, the shoulders and shoulder blades are lifted and at the same time touch the ankle with one hand, without pulling the neck forward, but working on the oblique abdominals. Inhale, return to the ground and exhaling is repeated on the other side.

This time the shoulders remain on the ground and it is the pelvis, the coccyx and the lower back that rise. We start with the arms along the body, lift the feet keeping the knees bent at right angles (or legs straight, for a greater intensity) and with a contraction of the rectus abdominis exhaling the pelvis is raised, as if to go into the position of the candle, and inhaling it returns to the ground, always slowly.

The activation sought is similar to that of the oblique crunches, only the execution changes. It starts with the legs bent and turned to one side, while the shoulder blades and shoulders remain on the ground in a supine position, elbows open. As you exhale, you raise your shoulders with contraction of the abdominals, inhaling you return to the ground.

We start in the supine position with the legs extended on the ground. As you exhale, raise your shoulders and touch the opposite bent leg with your right elbow, twisting your torso and pedaling your legs. Breathing in, bring the shoulders back to the ground and the two legs stretched parallel to the ground, but with the feet slightly raised. Breathing out you change sides. To be avoided if you have low back pain, due to the risk of back overload.

How many crunches to do to have sculpted abs

To have a belly with sculpted tortoiseshell abs, instead of a tortoise shell, you need several factors, among which training with crunches is only one piece and not the most important. 100 series of crunches are not enough, if the diet is incorrect and the amount of fat mass exceeds a certain level. That said, strengthening the muscles is part of the process towards a flat stomach.

It is necessary to be followed by a personal trainer to verify the correct execution of the exercise and to plan a personalized training program, especially if you are a beginner. You can start with 3 sets of 10 repetitions, checking your breathing well and making sure you have no back or neck pain. At an intermediate level you can move up to 4 sets for 15 reps, to increase to 5 sets from 30 as you are more advanced. Crunches are usually performed in combination with other abdominals, for example reverse crunches or bicycle crunches, in order to involve different muscle groups and thus have a more harmonious musculature.

Maria Teolis
2967 posts
Previous Post
How to remove make-up and cleanse the skin so as not to irritate it but to clean it thoroughly
Next Post
Cesare Cremonini: “My schizophrenia. And how I defeated it "