Cryotherapy: what it is, what it is used for and side effects 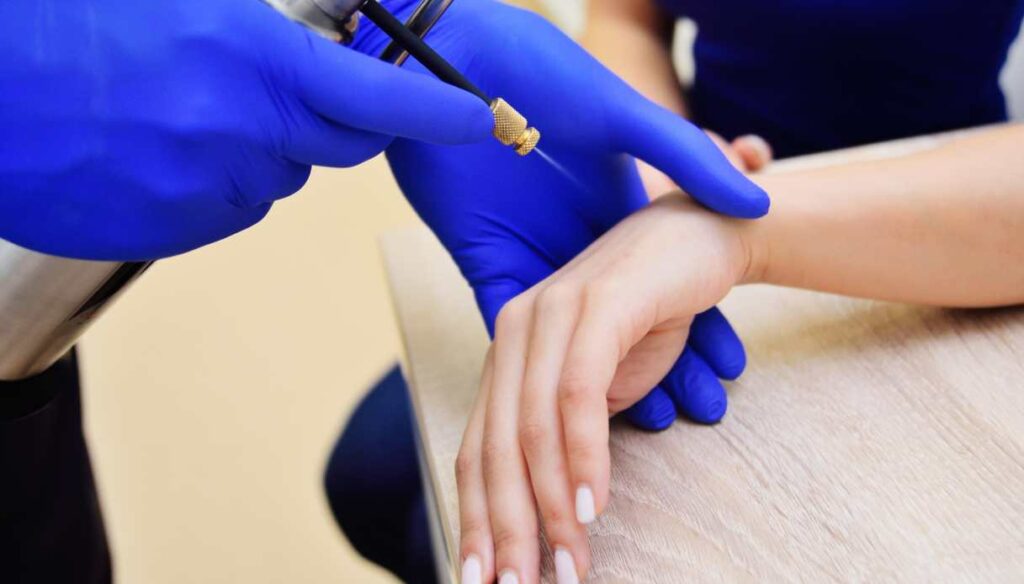 Cryotherapy is a technique that uses the cold to treat problems affecting muscles, circulation and skin imperfections

Cryotherapy is a therapeutic technique that uses low temperatures to treat health and aesthetic disorders. Also known as cold therapy, cryotherapy primarily uses ice and liquid nitrogen, a gas capable of reaching 196 ° C below zero. Although cryotherapy today is performed by doctors and other professionals in specialized centers, cold treatment has ancient roots and we have all used it forever. In case of bruises and trauma, for example, ice is used to reduce hematomas, edema, pain and inflammation, as is used to take very cold baths or sponging with ice water in case of high fever, to lower it in a short time and avoid even serious health problems. Over time and with technological development, cryotherapy has evolved and today finds application above all to solve imperfections and disorders affecting the skin, the muscular system and circulation.

In the dermatological field, cryotherapy with liquid nitrogen is useful for effectively eliminating warts, keratoses, and skin growths such as warts, but also for treating skin spots, freckles, acne, rosacea, alopecia and hair loss, hemorrhoids and small tumors. of the skin. Cold therapy with ice, even chemical, localized or systemic, is then used in case of bruises and muscle tears, as well as in circulatory and aesthetic problems.

Since exposure to cold causes vasoconstriction followed by vasodilation, cryotherapy can be used to improve blood circulation, reduce pain and relax muscles following trauma. The effect on circulation is also beneficial in the case of water retention and cellulite, limb edema, loss of muscle tone and sagging skin.

Cryotherapy can be done in several ways. Cold therapy can in fact involve the use of simple ice, used for localized areas using an ice pack, chemical ice or special fluoromethane spray cans. It is a kind of do-it-yourself cold therapy, useful for example in case of bruises, trauma, muscle tears. In this case, the cooling is gradual and serves to relax the muscles and reduce inflammation, therefore pain and swelling of the affected area, also thanks to the vasoconstriction and the mild analgesic activity of the ice. The cold is also used to lower very high fever by placing an ice pack on the forehead or bathing in cold water. These treatments have no particular side effects and can also be carried out at home, just being careful not to overdo the times and frequency of applications, since ice can cause burns on the skin or reduce body temperature too suddenly.

The actual cryotherapy is instead carried out with liquid nitrogen, an odorless, colorless and harmless gas that can reach 196 ° C below zero. Localized cryotherapy treatments are used to eliminate warts, warts and other skin growths or skin diseases and imperfections. Rapid freezing of the treated area causes a cold burn that leads to a cellular thermal shock. Therefore, crystals are formed in the cells to be eliminated, which are irreversibly damaged, dying. Consequently, any growth such as a wart or a condyloma will come off without producing bleeding, spots or scars. Since cryotherapy with liquid nitrogen causes cell death, it is usually done with precision instruments that do not damage surrounding tissues. A session lasts a few minutes and the treatment is carried out by the doctor – generally a dermatologist – as well as those of general and systemic cryotherapy.

General and systemic cryotherapy are in fact delicate techniques in which the whole body is exposed to low temperatures. It is carried out in special refrigerated cells or cryotherapy saunas and in particular conditions, for example in the context of some surgical operations or to relieve inflammation. The cryosauna is used in physiotherapy and aesthetics, for its anti-inflammatory, muscle relaxant and pain relieving effects and to improve the appearance and tone of the skin, fight water retention and reduce fat deposits. In general, systemic cryotherapy is not continued beyond two or three minutes.

Cryotherapy is a safe and well tolerated therapy but should be avoided in children and people who are very sensitive to cold. Furthermore, in case of pathologies, it is advisable to consult your doctor before undergoing cryotherapy treatments. Cryotherapy treatments may cause small blisters or bubbles to appear on the skin, redness and swelling, but these symptoms generally disappear quickly. After the treatment it is advisable not to expose yourself to the sun to prevent skin spots from forming.

Maria Teolis
3089 posts
Previous Post
Network security: Instagram towards an app for children
Next Post
Argentero and Marino more and more in love: the romantic dinner is "Poetry"