The former king of the paparazzi heavily criticized the girlfriend of the leader of the Maneskin for a photo published in his stories: what happened 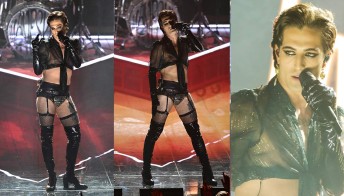 Fabrizio Corona is certainly not a calm person, who expresses his judgments with composure and tact. And this time too he did not contradict himself. The former king of the paparazzi wanted to launch yet another provocation by heavily attacking Giorgia Soleri, Damiano David’s girlfriend, perhaps hoping for a response from the leader of the Maneskin that certainly would have attracted attention.

Corona, in fact, continues to comment on the posts and covers of other celebrities by not measuring the words and, on the contrary, often being deliberately unpleasant to hide behind an alleged sincerity and frankness that many have also bored.

First of all it must be said that Giorgia Soleri has always exposed herself to the issues she believes in, fighting for the cause of women and their freedom to be themselves. In this context, therefore, fits one of the many photos that the model and activist published on her Instagram profile in which by sponsoring a sports suit she showed her unshaved armpits.

It was this that triggered the very unflattering comment of Fabrizio Corona, who shared the photo in his stories with the words: “I vomit for these fake radical chic that must flaunt a feminism that is no longer needed”. A sentence thrown there between one video and another of himself in the usual macho poses and after another story in which he mocked Fedez for a photo shoot on Vanity Fair.

For years now, Corona has been trying to get noticed between one release from prison and the next, to get people talked about and promote the clothing brands that it periodically tries to launch. He is suspicious, in fact, that he has lashed out at Giorgia Soleri, a very specific and very prominent character lately given her relationship with Damiano of the Maneskin, and not against another of the many influencers who fights for the same cause or using the photos of even more well-known personalities such as Lourdes Maria, the daughter of Madonna.

Giorgia Soleri, the haters and the negative comments

For Giorgia Soleri this is just the latest in a long series of negative comments about her. More than once it has happened that he ended up in the crosshairs of haters and people interested only in insulting and threatening, for having only tried to raise awareness on delicate issues and to have his say on certain topics.

A few months ago she had decided to publish some of the comments received, which showed only unjustified hatred and rancor, especially after she had exposed herself by talking about vulvodynia, a disease that affects many women, including her, who had wanted to help fight the disinformation that revolves around this issue.

“Expose yourself and tell yourself in such an intimate way is not easy, but I wanted to try to help other people”, he explained.