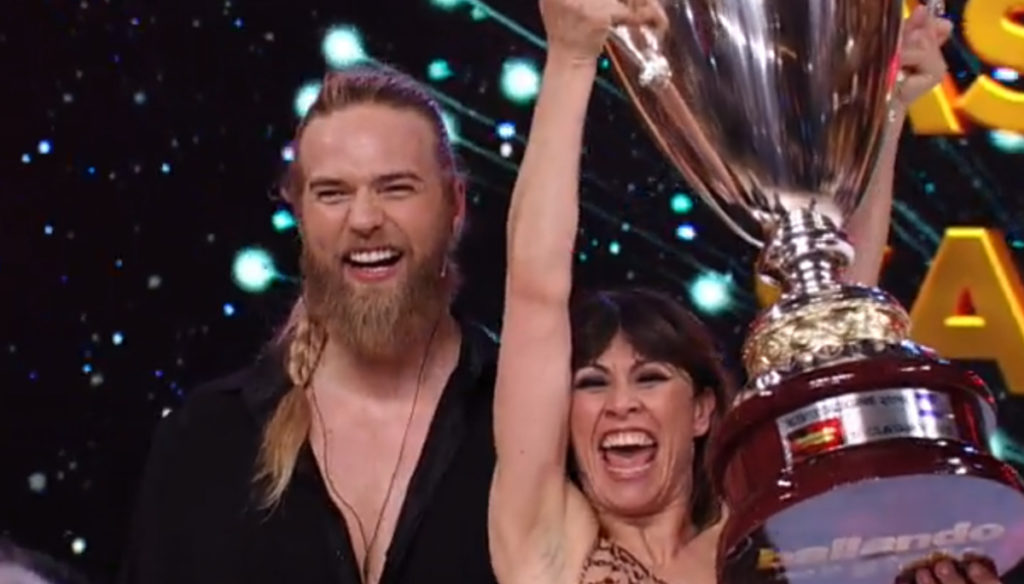 Dancing with the stars crowns the winning couple, at the end of a last episode full of emotions, twists and inevitable controversies

Dancing crowns the winning couple of a successful season, the best of the past six years. And the finale of Milly Carlucci's dance show could only live up to this successful year.

To triumph, it was an outsider, the warm-hearted Viking Lasse Matberg. The good giant who makes a tough woman like his teacher Sara Di Varia move while telling how much satisfaction he had in bringing that giant to be able to move gracefully like a butterfly, thanks to Lasse's always positive energy, really contagious even for those she watches him dance.

"He has the sun inside" says Sara Di Vaira and this sun has dragged him where no one would have believed, to win stoically resisting the pain in the elbow that tormented him in the final heats, the Cup of Dancing, against all physical evidence, taking out with the last sauce the super favorite Ettore Bassi.

Her challenger had entered the scene early in the evening, encouraged by a key phrase "I can do it!" Spoken by little Adele, her 6 year old girl suffering from down syndrome, whom Bassi calls' a gift 'and' a teacher of life'. In retracing his path, the Apulian actor dwells on the emotions he felt: on the fear of not making it, on the doubts, on the great strength that his teacher Alessandra Tripoli transmitted to him, and on all the feelings, sometimes conflicting , who tried during his adventure in Ballando, who reached their climax during the semifinal when Ettore was surrounded by all the people important to him: his brothers who danced with him, his mom who was applauding him in the audience and above all that video of his daughters, all three girls, the youngest of whom, Adele brought the most important message to her father, 'I can do it!'. And with that message in his heart Ettore Bassi dances his final.

After a perfect and passionate tango with Alessandra, on the notes of Roxanne, the jury brings out two 10 and all 9. The consecration of a couple much loved by the public and jury. The direct challenge against the graceful Milena Vukotic projects him in the final, where he is rewarded with the second place, sweaty, deserved, felt.

A finale that of Milly Carlucci's dance show that has been rich, however, from the beginning full of emotions, at the end of the umpteenth season that kept many people glued to Rai Uno on Saturday evening, ensnared by the charm of the choreography, but also by the courage, unconsciousness and commitment of the competitors who arrived dancers 'by chance' and today, as happens every year, now in love with dance.

The evening is opened by Angelo Russo, Commissioner Montalbano's agent Catarella, beloved for his incredible ability to get involved, who has been able to get naked and, led by the teacher Anastasia Kutzmina, he managed to do what he would never have imagined and, in the last episode, he even went down in the grotesque and funny clothes of the head of the Addams family.

Another highly esteemed couple follows. From the kindness of Ettore Bassi, we pass to the elegance of Milena Vukotic who, at the age of 84, led by the teacher Simone Di Pasquale, managed to enchant the public and the jury. He tells of his path not hiding the difficulties and challenges, but how he starts dancing in the arms of his partner, he convinces everyone again, the first judges, greatly admired by his grace. His third position, after the challenge with Ettore Bassi takes away the first place, declared, in the hearts of the jurors.

Then it was the turn of the most talked-about couple of this edition of Ballando, who also proved to be a catalyst of interest in the final. Osvaldo and Veera, say goodbye tonight, and everything that was beautiful or difficult will bring him inside. The former footballer tells of how grateful he is to his teacher, how much he admires his talent, but also that determined character, who wants to get to the point and never leave things in suspense. Osvaldo says he would like to become a little more like her, and not only to dance better, but to face life in a different way. To her blonde partner Osvaldo she gives a special thanks, a song written for her:

You are there and you will remain like a wave that caresses never destroys.

Dani sings them looking her in the eyes, then, once the music is over, he tells her what, perhaps always, he wants from her: "Let me win!" And it's a goal that really set itself, so much so that its performance was recognized more gritty than the others by the jury. And on the podium they arrive there: bronze medal and an unforgettable path for both.

To close the performances of the cast the couple De Girolamo-Todaro who in his journey to Ballando has distinguished himself for stubbornness, determination, vis controversy, and the desire to always do everything, even against the continuous criticism from the jury, which could not miss certainly during the final. A new spat ignited the dancers and saw them make a common wall against the crossfire started by Canino and Lucarelli. Nothing that can bring the two down, happy and proud of their path and happy to have arrived, despite everything and everyone, to play the final.

But in the end, to triumph with one last, unleashed sauce, after eliminating Osvaldo and clashing in a complex final test, between draws, blindfolded tangos and test of choice, against the favorite Ettore Bassi, was the blond giant came from the North.