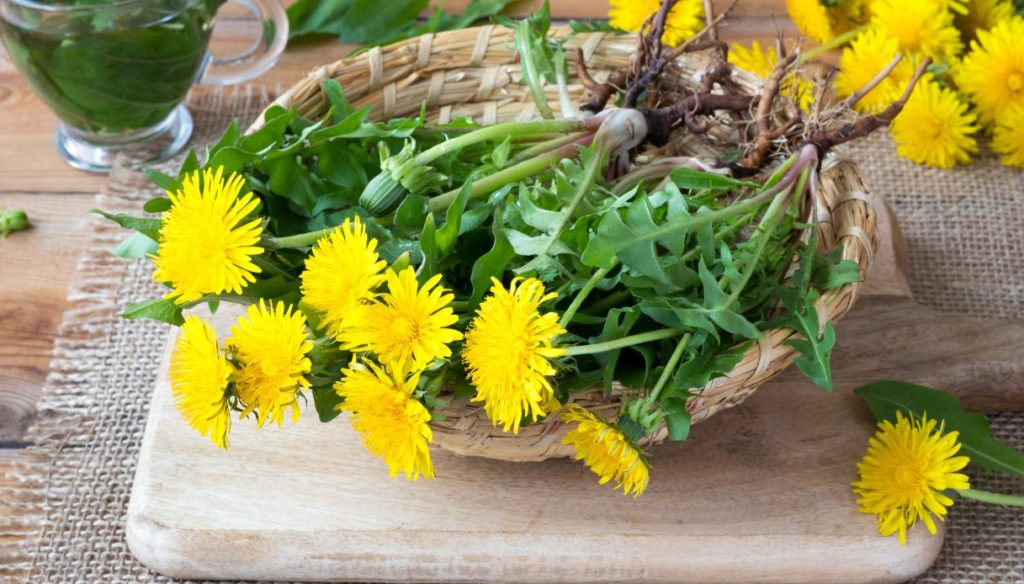 Dandelion (Taraxacum officinale) is a perennial wild plant belonging to the Asteraceae or Compositae family, the same as chamomile, arnica, calendula.
Also known by the name of dandelion, dandelion, pisciacane and piscialetto, the dandelion plant has a taproot root, brown and wrinkled, from which a rosette of basal leaves develops with deeply incised edges, in an irregular way. In spring, a smooth, unbranched stem grows in the center of the rosette of leaves, normally no higher than 40 centimeters and on which the characteristic solitary yellow flowerhead opens up that colors the uncultivated or cultivated fields, the edges of the roads and the vegetable gardens for all summer.
The flower heads of the dandelion are composed of a large quantity of ligulate flowers: at the end of flowering, the flower heads close and then reopen to form the classic dandelion head, formed by numerous seeds with pappus and arranged in a radial pattern.

The root and leaves of the dandelion have a long herbal tradition. In particular, dandelion is used for its cholagogue and choleretic properties. The intake of this medicinal plant is able to increase bile production and flow and is useful for supporting liver function, improving digestion and appetite.
Anti-inflammatory, antioxidant, hepatoprotective, antidiabetic and diuretic properties have also been attributed to the dandelion root.

The benefits related to the administration of dandelion are attributed to the presence of different components distributed throughout the plant, including sesquiterpene lactones, sterols (in particular taraxicin and phytosterin), inulin, phenolic compounds and mineral salts such as potassium.

All parts of the dandelion – leaves, flowers and roots – are also edible and have a bitter taste, due to the sesquiterpene lactone content. The leaves can be eaten like any green leafy vegetable, while the flowers are used to decorate dishes and in the preparation of syrups and the root is suitable as a coffee substitute, like chicory root.

How to use dandelion for health

Preparations based on dandelion are considered herbal medicines for traditional use, are found in herbal medicine and are useful in the treatment of minor digestive and urinary disorders and temporary lack of appetite.

The dried drug is administered in the form of a decoction using 4 to 10 grams of dandelion root: after placing the drug in cold water, it is brought to a boil and left to infuse for 10-30 minutes, in order to extract the constituents. The herbal tea obtained is recommended in case of minor digestive disorders including lack of appetite, feeling of fullness after meals, slow digestion and excess gas that accumulates in the stomach and intestines.

The benefits of dandelion can be enhanced by combining it with other herbal remedies such as ginger, turmeric, artichoke and milk thistle to promote digestive processes, improve intestinal motility and support liver function. Taken in synergy with pilosella, on the other hand, it increases the draining action on excess fluids.

Use of dandelion in cooking

All parts of the dandelion plant are edible and can be consumed for food to improve the digestibility of other foods, promote diuresis and provide the body with precious vitamins and minerals contained in the leaves and flowers.

Being a spontaneous and very widespread plant, it is possible to collect dandelions in nature, taking care to choose places as uncontaminated as possible, away from crops and traffic.

The dandelion leaves have a characteristic bitter taste due to the presence of sesquiterpene lactones. They must be harvested in spring, before flowering, taking a few leaves for each specimen. After washing them carefully they can be eaten raw in salads or blanched for a few minutes in salted water and sautéed in a pan with garlic and oil. The boiled dandelion leaves are also excellent for filling savory pies, omelettes, ravioli and cannelloni.

The buds of the dandelion, on the other hand, are preserved in oil, pickled or in salt and are used to prepare appetizers or added to raw vegetable salads and sauces, while the tubular flowers of the open flower heads are used above all as decoration as well as to prepare dandelion syrup.

The roots, on the other hand, collected in autumn from specimens of at least two years old, can be dried, toasted and used to prepare a coffee substitute, like chicory coffee.

Dandelion syrup is a kind of honey that can be enjoyed spread on toasted bread, used to sweeten herbal teas and other drinks, accompany cheese dishes or administered to calm coughs.
It is prepared with the open flower heads of the dandelion, collected in spring, at the beginning of flowering. The process is very simple.

Arrange the dandelion heads in a saucepan, cover with water and bring to a boil, then turn off the heat and leave to rest overnight. The following morning, filter the infusion with a colander, carefully squeezing the flowers and add the sugar and half a lemon cut into slices. Cook over very low heat without a lid without bringing to a boil, until the syrup has a slightly thick consistency, similar to that of honey.
The dandelion syrup can be kept for several months in an airtight glass jar, away from sources of light, heat and humidity.

Contraindications, side effects and interactions

Dandelion is considered a safe remedy and there are no known notable side effects. However, sesquiterpene lactones can cause allergic contact dermatitis and the use of dandelion is contraindicated in people hypersensitive to Asteraceae.

Preparations based on dandelion are also contraindicated in case of obstructions and gallstones, peptic ulcer, liver diseases.

As for interactions, dandelion should not be taken by those on lithium therapy and by people treated with drugs that cause increased calcium levels including beta blockers and ace inhibitors.

The Journal of Alternative and Complementary Medicine

Maria Teolis
2967 posts
Previous Post
Renato Zero and his son Roberto Anselmi Fiacchini: the special bond and their touching story
Next Post
HIV, why women are at risk and how to prevent them