This evening the TV series based on the book by Guido Maria Brera debuts, here is the dedication of his wife

This is an important day for Guido Maria Brera, the husband of Caterina Balivo. In fact, tonight the first episode of Devils is aired, the international TV series based on his novel The Devils. The host, proud and excited, shared her joy on social networks.

"How much effort, sacrifices, angers, tantrums, jealousies, changes and so much passion and dedication are in such an ambitious project that tonight it will become an international reality" – wrote Balivo on Instagram, in a long post accompanying a beautiful photo who portrays her in the company of her husband. “Tonight, Devils arrives on Sky Altantic. I remember when Lux Vide fell in love with your novel I Diavoli and also the very long meetings with the writers, day trips from Milan / Rome, Milan / London and a thousand specimens to find that patriotic and kind, mysterious and determined Massimo Ruggero interpreted by champion that is Ale "- continued Caterina, in what is in all respects a splendid praise of the work of Guido Maria Brera.

"I'm proud of you my love" – ​​is the host's beautiful dedication, which thus reveals the pride she feels for the international success of her husband. The TV series Devils is in fact a wide-ranging project, which has involved Italian, French and English productions. Also with regards to the cast, the show by Sky sees big names like Alessandro Borghi, Patrick Dempsey and Lars Mikkelsen. To celebrate this big day, Caterina Balivo dedicated her today's episode of My Next Book to Guido Maria Brera.

Forced home after the momentary stop of Vieni da Me, the presenter has in fact reinvented a social show much appreciated by her fans. It is a series of meetings with important writers on the Italian scene, and today it was up to her husband, who presented his latest book La fine del tempo. In the course of the interview, the two let themselves go to different funny beats and answers, just as happened in recent days. This project proved to be a great success and a great way to stay in touch with the public pending the return of Come to Me. According to rumors, it would not be that far. 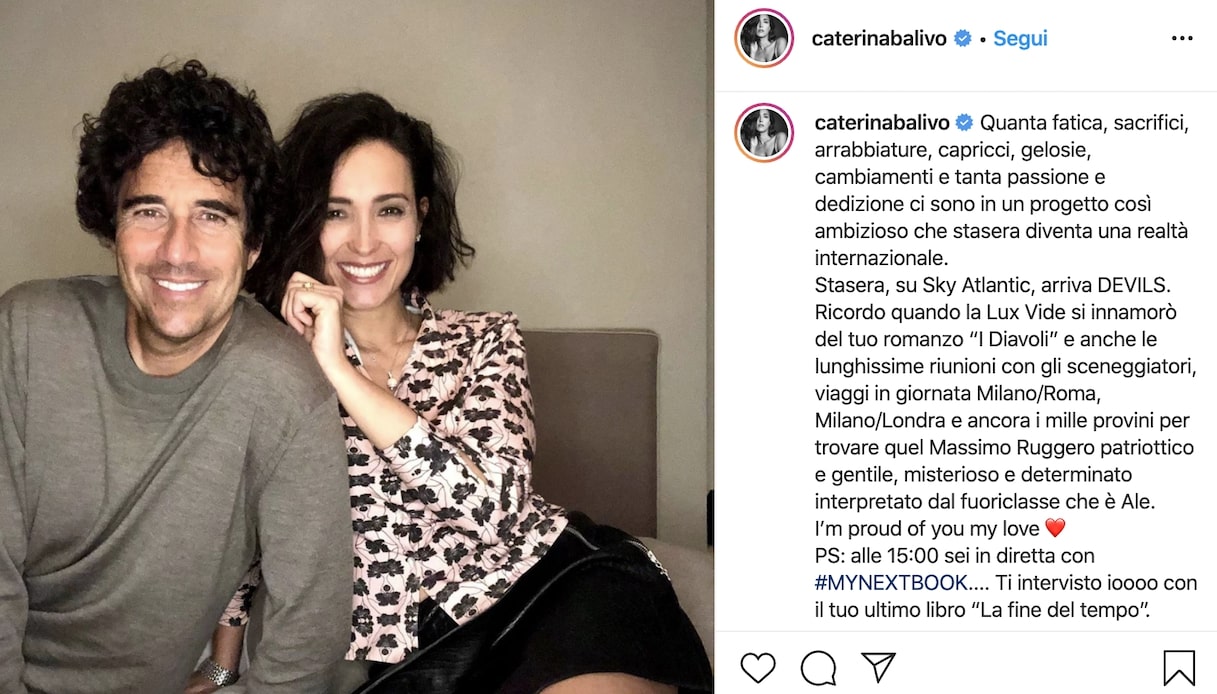