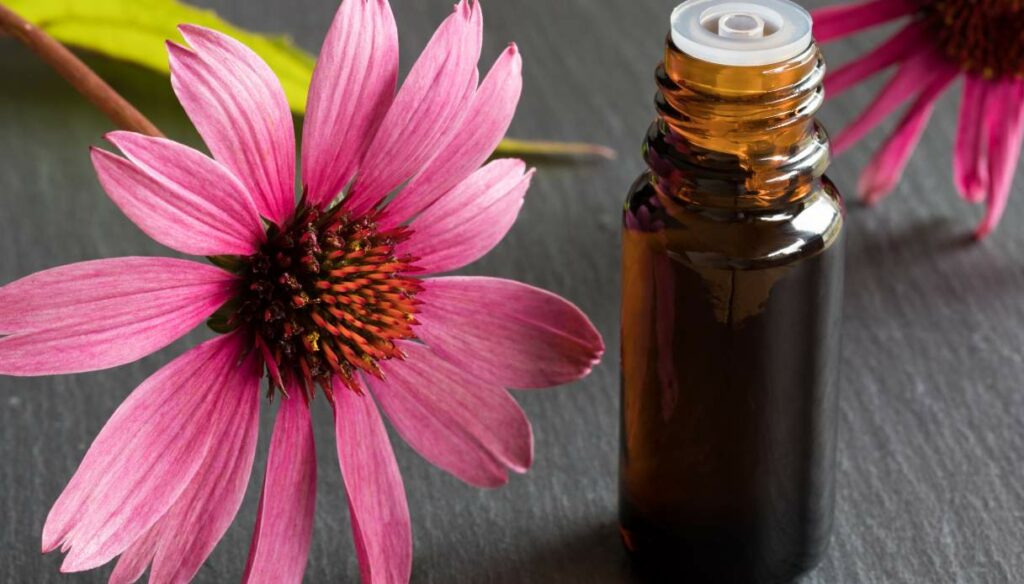 Echinacea is a genus of perennial herbaceous plants of the Asteraceae family that includes Echinacea purpurea, Echinacea pallida and Echinacea angustifolia. Echinacea, particularly widespread in North America, can reach heights of up to one and a half meters and is characterized by a tap root and a basal rosette of leaves, from which the inflorescence axis develops. The leaves of echinacea are oval or lanceolate, more or less incised, with an entire or finely serrated margin. During flowering, echinacea develops large flower heads formed by two types of flowers: the central flowers are tubular and purple, surrounded by pink ligulate flowers that fall downward in most varieties of echinacea.

In addition to being a magnificent ornamental plant to grow in the garden or terrace due to its great aesthetic value, echinacea also boasts numerous properties, which have long been exploited by indigenous American populations.

Echinacea has always been used by natives of North America who chew its root for the treatment of various ailments and diseases, from headaches to coughs, from digestive problems to snake bites. The first echinacea plants were imported to Europe in the late 1800s for ornamental purposes and then became a natural remedy for the prevention and treatment of flu symptoms.

Echinacea uses the root and the flowered aerial parts that mainly contain caffeic acid derivatives, polysaccharides, lipopolysaccharides, lipoproteins, volatile oils and flavonoids. Numerous studies carried out on this plant have confirmed its immunostimulating properties and this action has been attributed to the presence of polysaccharides. The oral intake of echinacea-based products is therefore useful for preventing airway diseases such as coughs and colds and other flu symptoms.

The external use of preparations obtained from echinacea, in particular from the pale variety, instead brings benefits in case of skin disorders. Creams and ointments containing echinacea extracts are helpful, for example, for the treatment of eczema, acne, sunburn, small skin wounds and Herpes simplex infections. For this purpose, products prepared with at least 15% of juice obtained from the flowering aerial parts of pale echinacea are used to be applied on the areas to be treated for two weeks. Cosmetic creams based on echinacea are also effective in slowing down skin aging and counteracting wrinkles and other signs of aging, including the loss of skin tone and elasticity.

Use as a supplement

Echinacea extracts are present in numerous food supplements readily available in herbal medicine including tablets and syrups, in addition to the mother tincture. The intake of these supplements is indicated to improve the body's natural defenses; Echinacea is in fact recommended to prevent or improve flu symptoms such as cough, cold, fever and to prevent recurring infections.

To support the immune system, echinacea is generally administered during seasonal changes, particularly in autumn and early winter, but can be taken at any time of the year to prevent flu and infections. In any case, it is important not to exceed eight consecutive weeks of treatment and to take at least a month's break between one cycle of intake and any subsequent cycle. As for the dosage, 900 milligrams of the drug are normally taken in three daily doses.

Echinacea-based products are considered safe and are also used in children and during pregnancy and breastfeeding. Although it is a natural remedy that is normally well tolerated and free of particular risks, any administration in childhood and in pregnant women should take place after asking your doctor for advice.

Echinacea-based supplements are then contraindicated in cases of ascertained hypersensitivity to Asteraceae since, in predisposed individuals, both internal and external use of this plant can cause allergic reactions. Better to avoid the use of echinacea if you suffer from asthma, allergic rhinitis and atopic dermatitis-Echinacea should not be taken by people who suffer from autoimmune diseases, including psoriasis for example. The supplements should be taken according to the manufacturer's instructions, without exceeding the recommended dosage; the use of echinacea in high doses or prolonged over time can cause mild or moderate disturbances such as nausea and other gastrointestinal disorders, headaches and skin itching.

Finally, echinacea can interfere with the bioavailability of some drugs, so before taking echinacea supplements it is good to inform your doctor, pharmacist or herbalist if you are following drug therapies.

Maria Teolis
2973 posts
Previous Post
Tania Cagnotto, the tender shot on Instagram with Maya and the baby bump
Next Post
Spinal Muscular Atrophy, children protagonists in the knowledge of SMA