Elena Curti, Albino Benito and the other children of Mussolini 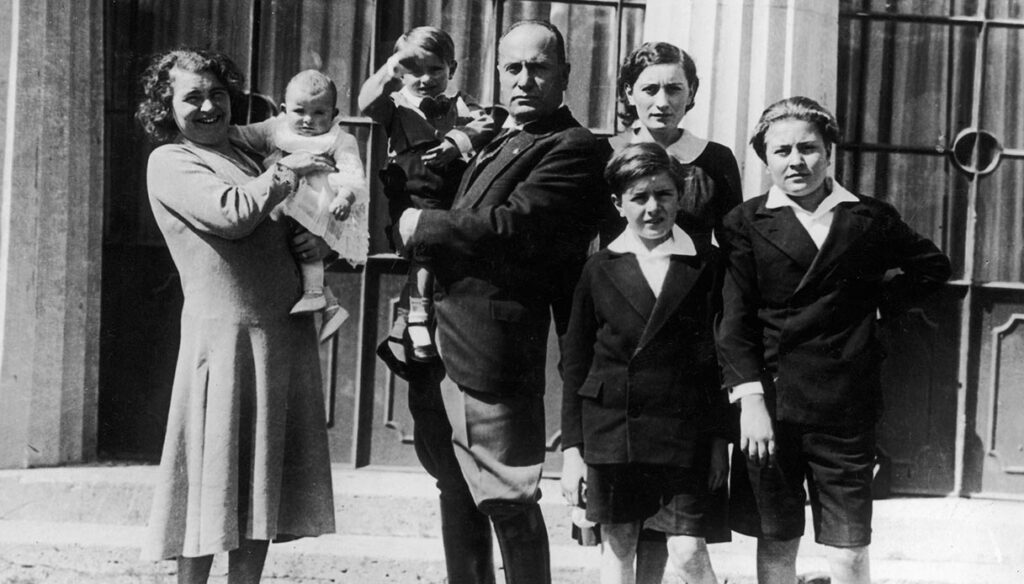 There have been legitimate ones that appear in family photos. And then there was Elena, the one who stayed by his side until the end. The others, on the other hand, have been forgotten and abandoned

The Duce was married to Rachele Guidi for forty years. And that wedding ring on the finger, by the woman, will always be claimed, before and after. Because Benito was her man, as she herself announces in the title of the book she wrote. And when he remarked that Mussolini was his and nobody else’s. Although from the others he ran much more often than one could imagine. Not that all remained impressed, of course. Some became friends after being lovers. Others were being pushed away with all its power. And then there was Margherita Sarfatti, the only one who perhaps conquered and dominated him intellectually. But the one with her is another story.

And many others were the women of the Duce. Those that came and went, with ease or with disarming defeat. At his side, however, she always remained, the legitimate one. That forgave him, only to vent his anger and jealousy on the others who, as the memories of the time confirm, gave life to real dramas that transformed the tragic twenty years of fascism into episodes of any soap opera.

But despite everything, she remained Rachel. The wife, the mother of his children, the recognized ones. Because they could be a family in the open, not like other illegitimate, unrecognized and abandoned children. Like Elena Curti, who despite her unofficial paternity had the “honor” of staying by her side or Albino Benito, who was recognized by his father and condemned by himself. And again Glauco Salle and Asvero Gravelli, even Bruno Vespa appears there, in the list of the secret and suspicious sons of the Duce, but never confirmed.

Elena Curti, the beloved unrecognized daughter of the Duce

The three-pointed nail: fragments of memory of the secret daughter of the Duce, this is the title of the book written by her, by the natural daughter of the fascist dictator. Elena Curti left her memories to the whole world, before dying at the age of 99, which revolve around her father. Mussolini, she, had never officially recognized her, thanks to that secret kept alive by her mother for many years.

Angela Cucciati, a Milanese seamstress, fell in love with the Duce at the end of 1921, while he directed the People of Italy. It was she who sought him out to ask him a favor: to free her husband from prison where he had ended up for political reasons. Then the passion and the birth of Elena Curti.

It takes 18 years to discover the identity of the father. Then his mother confessed the truth to him and she met the Duce, who chose to keep her by his side. The story has it that the two were very close, that every Thursday afternoon, during the days of the Republic of Salò, the two met. Elena was found in the armored car used for the escape from Dongo, sitting next to her father. Thus she too was arrested by the partisans and remained in prison for five months.

It wasn’t just Elena Curti and the other suspects, secret and hidden. In fact, five children were born from the marriage with Rachele: Edda, Vittorio, Bruno, Romano, Anna Maria. Yet Mussolini did not want any of these by his side, not even the much loved Edda or the faithful Rachele. No, Benito chooses to have the daughter of the Milanese tailor beside him, because it is by his side that he feels at home.

A separate discussion deserves Ida Dalser, the crazy woman to be locked up and interned. Considered mad only because she claimed the rights of that son born of the relationship with the Duce. Because Ida was his mistress, yet another. Unlike others, he never gave in to the dictator’s refusals and tried in every way to assert the rights of his child, even going to his house and making scenes. But so she only gave him an excuse on a silver platter.

Mussolini not only excluded her from his life, but from the whole society by having her locked up in an asylum, a fate destined for many women of the regime. But in the meantime that son recognized him, but more than a victory this fact turned into a condemnation.

Ida ended the rest of her days in an asylum. Benito Albino never saw her again and after a total loss of identity he too was locked up in a psychiatric institution and died there.

Candido Nigris, Glauco di Salle, Vanna Borgo and the others

If history tells us about Elena Curti and Benito Albino, it also provides us with clues about other children of Mussolini on which, however, a certain mystery hovers. Candido Nigris, for example, should be the second son of the Duce from the extramarital affair with Gigia Pajetta Nigris. Margherita Sarfatti also spoke about this relationship, but nothing is known about the Friulian second-born.

Among the secret sons of Mussolini also appears the name of Glauco di Salle, son of Bianca Ceccato. The woman, a young secretary of the People of Italy, allegedly had a brief and intense relationship with Benito Mussolini during the years of running the newspaper.

There is also Vanna Borgo, born of the French pianist Magda Brard with whom the Duce will remain in contact until his death. No official confirmation from those directly involved, even if little Magda, after her birth, was disowned by Brard’s husband.

The legend of Bruno Vespa and others

To the sons of the Duce whose paternity is given for certain, there are others whose stories are even more mysterious. Legends or truths never revealed?

Claudia Apriotti, in the 90s, declared to be the illegitimate daughter of the Duce to all the Italian newspapers. The request to the judiciary was to exhume the body of the Duce, without success. After a battle that met with dissent from the Mussolini family, the story ended in silence.

The name of Asvero Gravelli, a fascist and racist journalist from AntiEurope, also appeared among the names of Mussolini’s possible children, above all following the statements of his daughter, Patrizia De Black, who declared she was the granddaughter of the Duce. The thesis, however, has never been confirmed.

And then there is the most famous case of all, the one that has kept the attention of Italians high and which concerns Bruno Vespa. This story was brought to light by Alessandra Mussolini on television: Bruno would have been born from a relationship between the Duce and a waitress, his mother precisely. Advertising stunt for marketing purposes? We cannot know this, the fact is that paternity has never been verified. 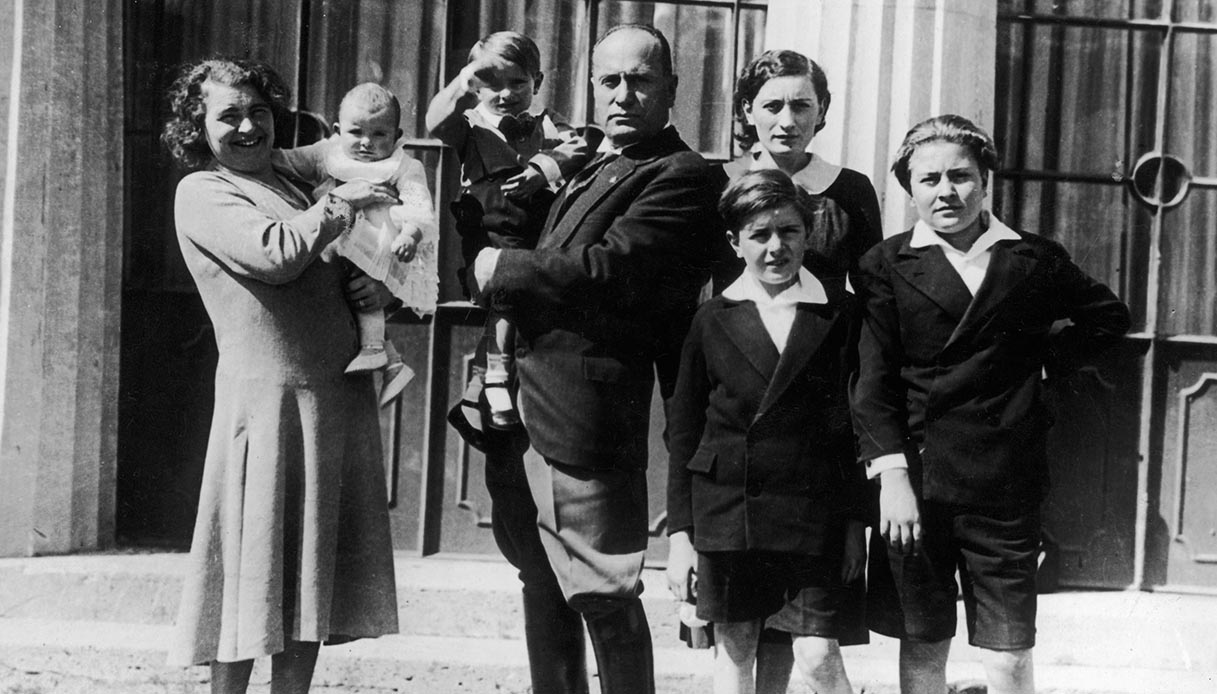 Benito Mussolini, his wife Rachele and their children

Giovanna Pirri
5944 posts
Previous Post
Kabir Bedi, who is the (very young) wife Parveen Dusanj
Next Post
We donate blood, a lifesaving therapy for many people