A sui generis edition for Eurovision: Diodato thrilled with an intense performance, while Levante protested on Instagram

The Eurovision Song Contest 2020 final scheduled for Rotterdam was due to air this Saturday, but due to the health emergency, this edition was replaced by the Eurovision show: Europe Shine a Light – Let's turn on the music.

To represent Italy, as per tradition, was the winner of the last edition of the Sanremo Festival: Diodato, who sang his song Make noise, one of the great protagonists of flashmobs on the balconies in recent months, performed.

An exciting and intense performance, in a suggestive Arena in Verona, deserted and illuminated with the colors of our flag and the European one. After the official performance, the singer-songwriter gave a surprise to the public, singing the notes of Volare by Domenico Modugno. In direct connection Diodato confessed:

It was an incredible experience, because I heard my voice go back with a different baggage, I heard the whole history of that place, of that temple of world music where the older ones played. It was a privilege. It was wonderful working for this small business.

As in the case of other programs and events – just think of the David di Donatello conducted by Carlo Conti – this edition of Eurovision turned out to be different from those of past years: an evening that has turned into a celebration of all participating countries, 41 specifically, without the classic race.

What went on the air was a non-competitive event, a show where you can listen to a taste of the songs of each artist, with a staging and a particular location to present their song to the public in Europe.

The program was commented by Flavio Insinna and Federico Russo: despite the absence of the audience it was a show full of colors, energy and great emotions.

Guests of the evening, in addition to Diodato, the Italian artists who participated in the latest editions: Mahmood, Ermal Meta and Fabrizio Moro, Francesco Gabbani, Francesca Michielin and Il Volo, as well as Al Bano who recounted his performances on European stages and Enzo Miccio who commented on the most curious outfits of the evening.

But just before the broadcast of Eurovision, Levante – ex of Diodato and according to rumors the person to whom the song Fai Rumore is dedicated – published a post on his Instagram profile, with the hope of turning the spotlight on the current situation of music and culture in general in Italy.

A shot that sees her on the handset of an old telephone, accompanied by words of a certain weight, all written in capital letters:

I don't feel I need to explain to anyone how sad an entire existence is without art and culture.

The singer clearly refers to the blocking of all activities related to the world of culture, which is damaging an entire sector and many people, encouraging to use Instagram as a means to make one's voice heard:

We use our voice to tell of a sector of workers and professionals capable of moving economies of importance and a huge supply chain for the whole country while creating social and cultural value. 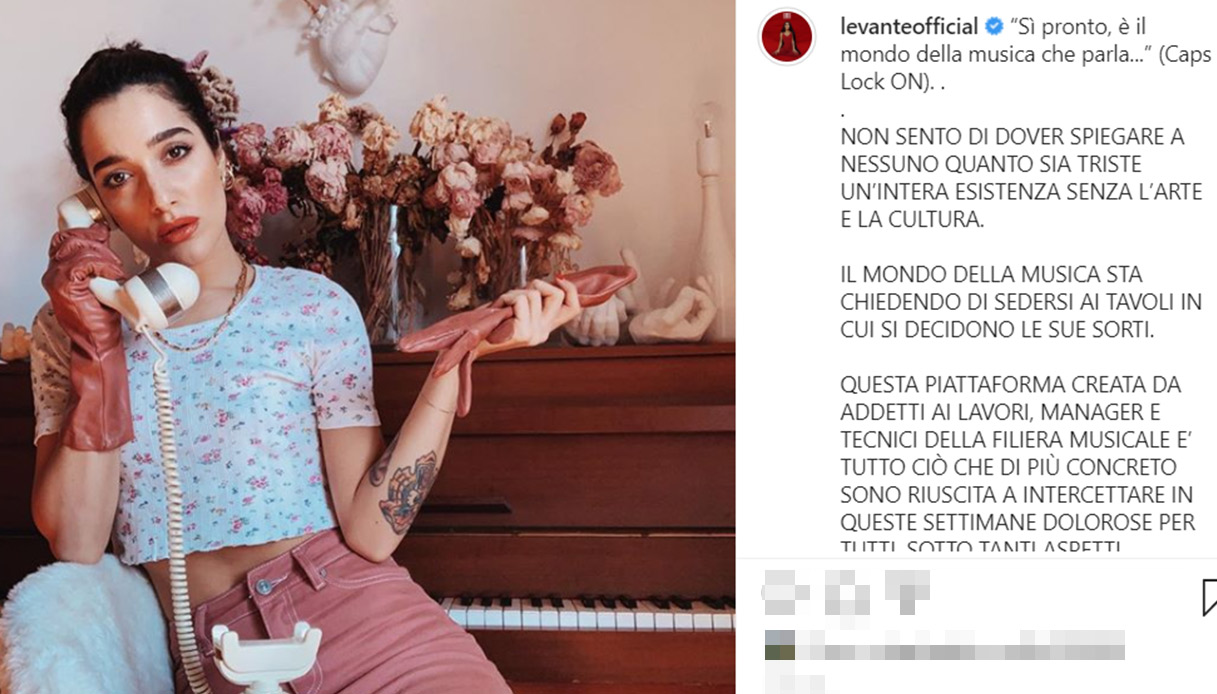