Films to see with the family: the unmissable titles 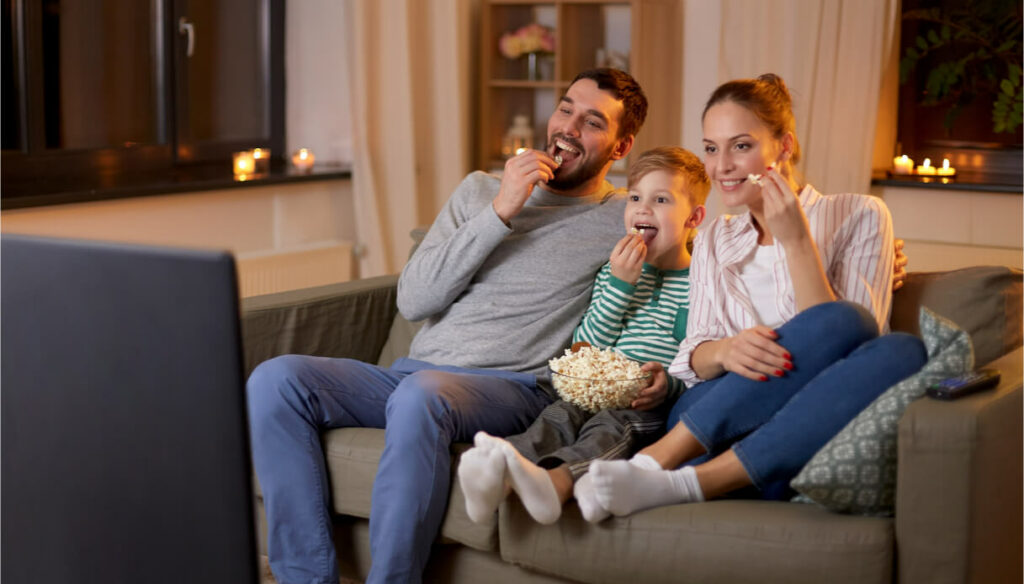 Do you want a family evening to see a good movie suitable for everyone? Here is a list of the most beautiful titles to see together

Fancy family movies? Sometimes happiness is in the little things: coming home after work and spending time with the family could be a difficult task due to everyone's different tastes, but if you select a family-friendly film, the evening can take a completely different direction. Continue reading the article to choose the story that will accompany your evening on the sofa.

1. "Truman show", between reality and fiction

A classic signed 1998 sees as the protagonist Truman Burbank within an all too perfect life, only to understand that his every movement or event did not depend on his direct choice, but was wisely guided from above with the complicity of all the others. neighborhood individuals. A revealing film that never before brings voice of the bond that is established between real life and virtual life. Masterfully interpreted by a young Jim Carrey with director Peter Weir, “Truman Show” remains a timeless story within everyone's reach, capable of involving both large and small audiences.

Why see it? An unexpected ending and an engaging plot frame a film that then, as now, was a great success in the eyes of visitors. "Truman Show" redeems the authenticity of their choices through free will. Fun and at the same time moving, it offers an hour and 43 minutes of pleasure suitable for everyone.

Once again the protagonist is Jim Carrey, but in the guise of a bored and demoralized employee more than by work, by life in general. The days follow each other with the same apathetic rhythm for the bank employee, who, after a bad divorce, seems to have annihilated any ability to derive good from everyday life. It will be a seminar that will happen by chance to change his destiny forever. A motivational guru will be able to raise the fortunes of the young employee, giving him the opportunity to perceive reality under a brighter, more positive and constructive aspect. The new Yes man will take some time to fully understand the lesson, but it will be worth it and it will be a new beginning of an amazing journey.

Why see it? Who, big or small, has never experienced an unsatisfactory moment? The story shaped by the direction of Peyton Reed, rather than facing the difficulties, offers a motivational idea able to read what is around us in a completely new way to let us savor the beauty that we were not able to grasp before. Light, but engaging and with a strong message, “Yes man” is definitely a film to watch as a family to reflect and smile together.

A gentle and simple-minded man with autism finds himself involved in events that are important to the average. Despite his gaffes and his bizarre ways, through his love for running he manages to redeem himself as a man, father and worker. After a brilliant military career, Tom Hanks, in the role of Forrest, between the 60s and 70s found himself awarded the Medal of Valor during the Vietnam War, even managing to fulfill his dream of love.

Why see it? Compelling and out of line, “Forrest Gump” teaches how even those suffering from an autistic disorder are able, through willpower, to face life as and even better than other peers. A story of struggle, love for life and sensitivity runs to the rhythm of the longest race in history.

4. “Males against females”, fight without winners or losers

On a lighter line lies the 2010 Italian comedy “Males against females” which sees among the protagonists the very nice Fabio de Luigi with Paola Cortellesi. From married couples to flatmates with platonic relationships, there is laughter and twists and turns for an hour and 47 minutes.

Why see it? If you want to laugh without thinking too much, “Males against females” is for you, especially if on the sofa next to you there are teenagers who will be able to enjoy even more the dynamics of the couple between quarrels and reconciliation. A light texture with no commitment is sometimes the answer when you just want to relax.

5. “Billy Elliot”: the child who wanted to dance

A boy prefers dance to boxing, causing discontent in the family and a few smiles and nudges among the people watching him. The father disapproves of the passion of his son, who, becoming passionate about dance, attends a course where he is the only boy. The 2000 film with Jamie Bell conquers the hearts of young and old, carving out its share as a family film, pleasant and at the same time a message bearer. Eventually, even little Billy's father seems to accept his talent. A story of a different boy, who behaves normally, immersing himself in a world that always seems to have belonged to him.

Why see it? “Billy Elliot” teaches how to cultivate one's choices, even when they are not welcomed with great enthusiasm by those who, before others, should be supporters. Alone, but accompanied to the rhythm of classical dance, Billy manages to channel his energies into an activity that fills him with joy and satisfaction, also bringing others to his side.

6. "The cyclone": how life can change from one moment to the next

It was a box office record when it came out in 1996 with the direction and interpretation of Leonardo Pieraccioni (in the role of Levante). The young engineer is literally shocked by the unexpected arrival of a group of flamenco dancers who, due to a mechanical breakdown of the bus, ask to be allowed to stay at his home before leaving. The plot stitches together more sentimental stories in which not only Levante with the beautiful dancer Caterina are involved, but also the driver with the village bartender and the protagonist's sister with another dancer. A film of other times will be able to make the little ones savor the simplicity of the comedy of the past.

Why see it? The film was the eighteenth highest grossing in the history of Italian cinema. The shots are slow and give the protagonists time and time to interact with each other to create simple but effective comic skits. The film teaches how, from one moment to the next, life can take a direction that is anything but expected, thus marking a new beginning full of joy and hope.

7. “I fall from the clouds”: one of Checco Zalone's musts

Who, at least once, hasn't seen a Checco Zalone film? If you are one of them, try this movie to watch with family directly streaming on Netflix. A young Apulian boy named Checco, after being abruptly dumped by the girl Angela, who called him a failure, chases his dream of becoming a singer, abandoning his southern land to enter the cold world of the north. It is in Milan that he decides to get involved after having met by chance an alternative band to which he gives a passage.

Here he redeems his thirst for fame and more. Moments of unforgivable gaffe follow one another like in an amusement park linked to the simplicity of poor Checco also for the different way of living between north and south in an exhilarating setting. The film that sees Giulia Michelini as co-star has met with considerable success, so much so as to push Checco to continue in the world of cinema, managing to satisfy his audience again.

Why see it? If you love the genuine classic comedy of Checco Zalone and the clichés between north and south revisited in a comic key, “I fall from the clouds” is bread for your teeth. A family movie available on Netflix that will make you spend a fun evening without neglecting messages of equality and integration.

We are not talking about the cartoon, but the film that sees the masterful interpretation of Johnny Depp. A daydream that of little (and sometimes huge) Alice who is taken to a magical world inhabited by talking animals over the top. If the cartoon – despite its intensity – may prefer a young audience, the film is able to not disappoint the expectations of even the greatest.

Why see it? “Alice in Wonderland” is undoubtedly one of the best films to see as a family. There are many lessons that can be learned from one of the most compelling cartoon plots in all of history. You become big or small depending on what you face and how you live that particular experience. The film suggests that it is possible to develop one's identity, understand who we are and be masters of one's own choices. Finally, the Mad Hatter (played by Johnny Depp) shouts out the uselessness of judging others, because everyone is crazy in his own way, with his peculiarities and his beliefs.

Giovanna Pirri
4840 posts
Previous Post
Acupuncture: what it is, its benefits and how a session takes place
Next Post
Vittoria Puccini supports Aurora Ramazzotti victim of catcalling