Francesca Barra, on Instagram message of solidarity for Loretta Goggi

Francesca Barra sends a message of solidarity to Loretta Goggi, hit by heavy criticism on the web, and remembers the threats received in the past

Throughout her career Loretta Goggi has received many certificates of esteem and affection. Over the years there has been no shortage of criticisms to which, unfortunately, you never get used to. Fierce, then, were the ones who hit her recently, after her performance on the stage of the Seat Music Awards, so much so that she took a drastic decision. Francesca Barra also intervened to support her, who wanted to send a message of solidarity to the singer.

Loretta Goggi, 70, took the stage of the Seat Music Awards to celebrate the 40th anniversary of ‘Maledetta Primavera’, one of her greatest hits. The choice to sing the song in playback and its look, however, have unleashed some web users, who have indulged in heavy criticism and, in some cases, very offensive.

The insults did not go down to Goggi who took a drastic decision: to permanently move away from social media, thus also renouncing the support of his supporters. To understand this choice Francesca Barra, who through Instagram wanted to send a message to the singer recalling how much she too suffered a lot from the attacks received on the web.

To unleash the ire of some users, la Barra remembers, the decision to start a relationship with Claudio Santamaria after the divorce from her first husband. Messages of hatred and even threats addressed to her children that have ruined her serenity at the time and that have reappeared even recently after the announcement of her pregnancy.

Recently after the news of my pregnancy – she declared – someone tried to spoil our joy. Have they succeeded? No, on the contrary! As boring and feel-good as it is, education wins hands down. […] Goodness, courage, beauty and honesty are not orphans, they are the children we must protect and our gift for future generations.

Finally, La Barra invited Loretta not to be discouraged by attacks on social media, advising her to proceed with the elimination, blocking and reporting of all those rude and aggressive users. A job that requires time and commitment, of course, but which will allow her to create an increasingly supportive and respectful community.

Don’t give up Loretta because I’ve found a solution (as hard as a third job). […] I make selection at the entrance, block, gate (I denounce the most offensive).

Loretta Goggi, who in her farewell to social media also thanked all those who have always supported her and made her feel loved, will she listen to Francesca’s words and return to share moments of her life with her followers? 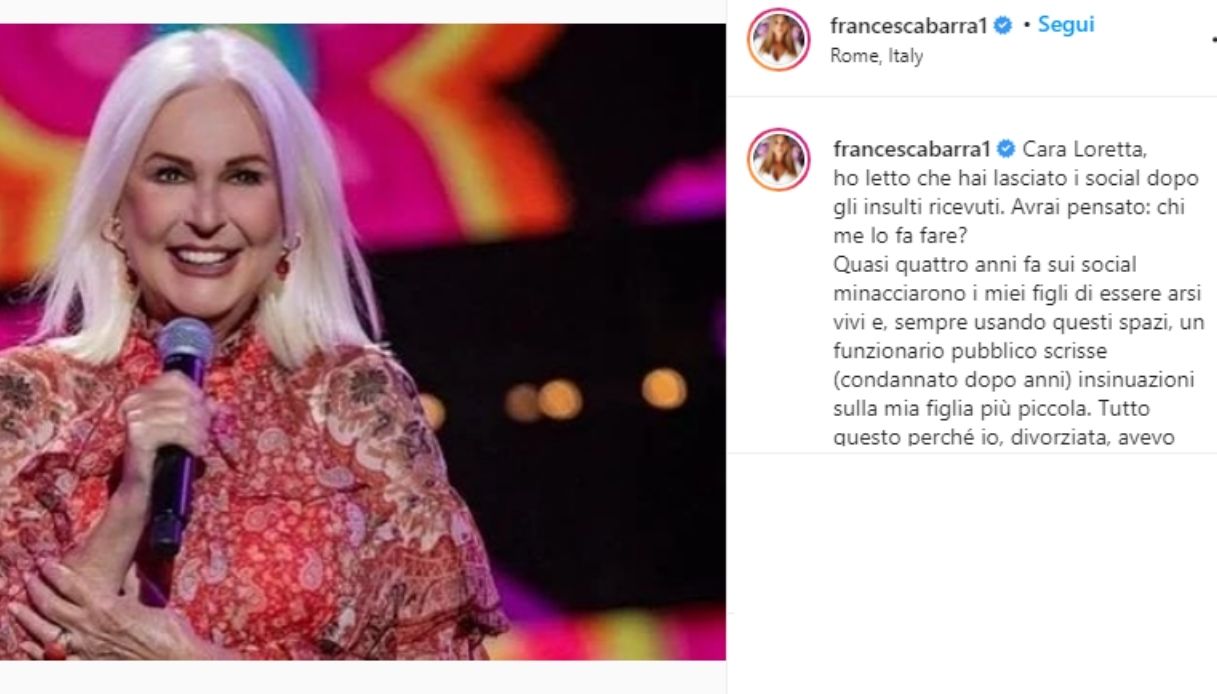 Barbara Catucci
10158 posts
Previous Post
Mara Venier, the background on the farewell to Renzo Arbore: Domenica In has to do with it
Next Post
Narrated mind maps of literature, history and philosophy