Francesco Sarcina will be a father for the third time: according to some rumors, the partner is pregnant 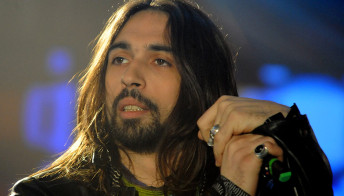 Francesco Sarcina, survivor of alcohol, drugs and a life on the edge

Francesco Sarcina will be a father for the third time. As reported by the weekly Chi, the young companion of the singer is pregnant. Already some time ago, guest of Today is another day, a program conducted by Serena Bortone, the leader of the Vibrations had confessed that he was very much in love.

After the end of the marriage with Clizia Incorvaia in fact Sarcina found a smile next to a fan. The girl is a twenty-year-old student with whom there would have been a real love at first sight. Francesco is already the father of Nina, 6 years old, the result of the bond with the influencer, while 14 years ago, from another relationship, he had the first-born Tobia. The third child – whose sex is not yet known – should arrive in October. "His very young partner has reached the seventh month of pregnancy", reads the weekly.

Thanks to his new love, Francesco Sarcina would have found the balance he had been looking for for some time, leaving behind a dark period. A few years ago the artist ended up at the center of gossip due to the end of his marriage with Incorvaia and the break with Riccardo Scamarcio, his great friend. Today many things have changed: if Clizia has started a new life with Paolo Ciavarro, met at GF Vip, Francesco will soon become a father again.

Sarcina is not the only singer who, after a painful breakup, will become a father again. According to the latest rumors, Gigi D’Alessio is also about to become a dad for the fifth time. Partner Denise Esposito, met in the summer of 2020 in Capri at the end of a concert, would be pregnant. For Gigi this is the fifth child after Claudio, Ilaria and Luca, had by Carmela Barbato, and Andrea, the result of the bond with Tatangelo. A novelty that comes after the end of the Neapolitan artist's bond with Anna Tatangelo. Just like Clizia Incorvaia, happy next to Paolo Ciavarro, Tatangelo too would have turned the page by now. His heart today belongs to Livio Cori, a Neapolitan rapper and actor known thanks to mutual friends. After months of indiscretions and sightings, the couple was paparazzi during a holiday in Puglia, between complicit looks and passionate kisses that seem to confirm the relationship.