The model is furious with her ex-husband for the photos taken with her son Carlos, who just got out of prison. Nina posted comments about vitriol against him. It is stormy 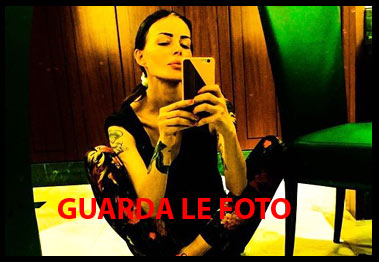 Not even fifteen days have passed since the release of Fabrizio Corona who is already igniting the controversy. The subject of the dispute is the first photo of the ex paparazzo taken out of prison, which portrays him with his son Carlos and his mother Gabriella (LOOK AT THE PHOTOGALLERY).

To unleash the storm is Nina Moric, Carlos's mother and Corona's ex-wife. According to the model, the photographer is already taking advantage of his 13 year old son:

I am disappointed because in this delicate moment certain things had to be avoided … If you only have a little salt in your head you can only agree with me.

She writes furiously on social media and then increases the dose:

He is the same man who went to jail three years ago. You lied to me … the only thing I asked was not to bump Carlos into any newspaper, to wait at least some time! Jerks praise him well … In a month he'll do another shit, I'm sure! I know him better than anyone else! Peace.

Moric just can't stand Corona's attitude and tries to defend the privacy of his son, enough to mock the ex in a video posted on social media and then promptly removed, as well as vitriolic posts, to avoid further discussions:

I am very happy that Carlos was able to see his father after almost 13 years. The only question I ask myself … But when they met, what did Fabrizio say to him? "Nice to meet you, Fabrizio …"?