Gianni Morandi, the video from the hospital: "I was really lucky" 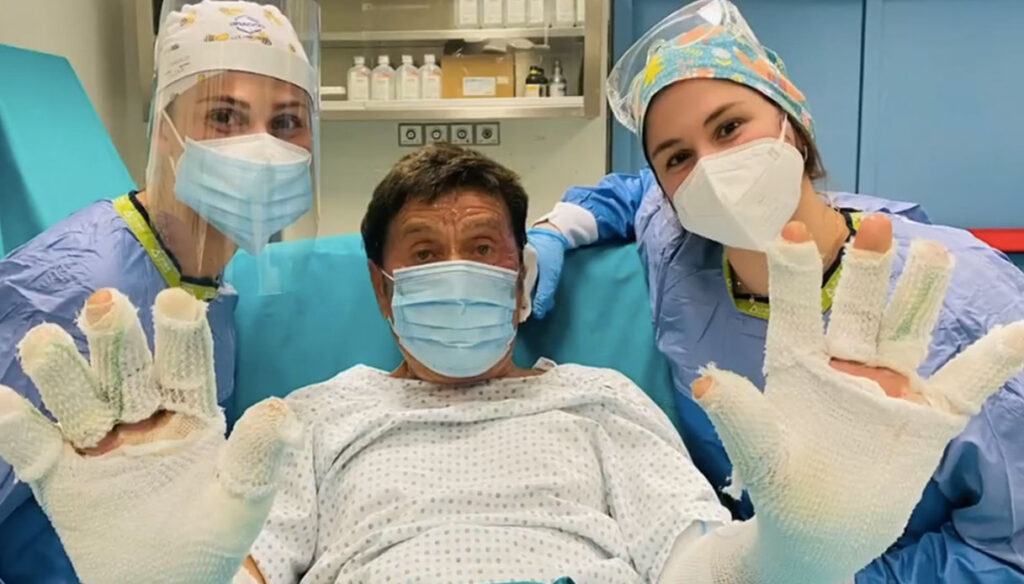 Gianni Morandi is still hospitalized due to the bad burns he caused a few days ago in his home in the province of Bologna.

In the video Gianni shows himself in the patient's outfit, with the gown and the bandages on his hands and knees, doing some of the movements recommended by the doctors and talking to the staff who follow him. In the background the notes of Jovanotti's Lucky Boy, while he himself admits: “I was really lucky“.

In fact, the accident happened by chance on the afternoon of 11 March. Morandi was burning some brush outside his house when he lost his balance and ended up on the fire causing bad burns. Quickly transported to the emergency room of the Maggiore Hospital in Bologna, he was then transferred to the Large Burns Center of the Bufalini Hospital in Cesena, a center of excellence in the treatment of this type of injury.

"The first thing I want to do is thank all the extraordinary team that assists me every day, led by the primary doctor Davide Melandri – continues Gianni in the caption that accompanies the video made by his wife Anna – With great professionalism, everyone is helping me to overcome this moment so delicate and difficult, now it's time to start moving. These are the first steps…. ”. Already a few days ago, after a week of silence, the singer had published his first post, the message sent by Bologna, his favorite team. Before training, the players and coach Sinisa Mihajlovic had sent the singer a good luck wishing him a speedy recovery. “Thanks guys!” Wrote Gianni, who did not hide the difficulties he is facing. “It's harder than expected,” he admitted, also responding to numerous comments from fans and friends. “I wish I could start greeting you again but I also struggle to hold the phone in my hand,” he explained. Now, finally, the first progress. Tag: Gianni Morandi Star & Vip

Barbara Catucci
8450 posts
Previous Post
Queen Elizabeth canceled the parade for her birthday
Next Post
Benjamin Mascolo and Bella Thorne get married: the announcement on Instagram and the ring