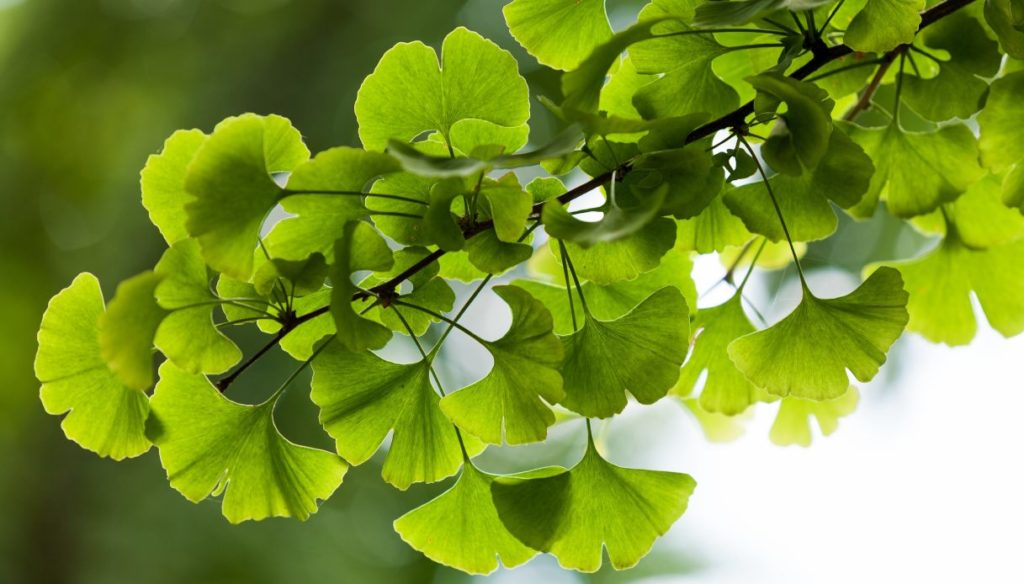 Ginkgo biloba is a dioecious tree native to China, belonging to the Ginkoaceae family, considered a living fossil as the only species that represents the Ginkgophyta.
In some oriental countries, ginkgo is considered a sacred tree and is often planted in temple gardens, while we find it in various parks and gardens since, in addition to its therapeutic properties, ginkgo is highly appreciated for its ornamental value.

It is a plant characterized by a trunk that can measure up to one meter in diameter, reaching a height of even thirty meters. The branches carry deciduous leaves, alternating and grouped in tufts, of a light green color similar to small fans, of slightly different shape depending on whether they grow on the longer branches, called macroblasts, or on the shorter branches and almost completely devoid of internodes, called brachiblasts. The leaves of the brachiblasts are almost always whole or with a shallow incision, while those that develop on the macroblasts are deeply incised. In autumn, ginkgo leaves take on a yellow color because, before they fall, the plant stops producing chlorophyll and degrades the one already present. This phenomenon, which can be observed in various deciduous species, is known as foliage.

The leaves of Ginkgo biloba are used in herbal medicine and phytotherapy especially for their action on the circulatory system and in the treatment of mild cognitive impairment. Ginkgo is in fact considered vasoregulator and inhibitor of platelet aggregation. The properties and benefits of ginkgo depend on the presence of flavonoids, sesquiterpenes and diterpenes, the latter known as ginkgolides.

The reproductive structures of female ginkgo specimens are ova which when ripe become fleshy, yellowish and have a very unpleasant odor due to the presence of butyric acid.
The male specimens, on the other hand, have pendulous cones that develop on the shortest branches and contain pollen. Pollination occurs thanks to the action of the wind.

Ginkgo seeds are toxic but the internal part is commonly consumed for food by Asian populations, after roasting. The outermost part of the seeds is instead discarded because, even after simple contact with the skin, it causes violent dermatitis due to the presence of toxic phenolic substances; if ingested it leads to disorders of the circulatory, respiratory and digestive systems.

Gingko biloba has numerous properties and health benefits and has been used for millennia to treat various ailments. The therapeutic use of ginkgo is justified by the presence of active compounds present above all in the leaves: in fact, ginkgo leaves contain high quantities of flavonic compounds and numerous terpenic derivatives including bilobalide and ginkolides A, B, C, M and J, molecules responsible for its properties.

Once dried, the leaves are used in herbal medicine and phytotherapy to prepare useful extracts in case of:

Ginkgo leaves and the extracts obtained from them are therefore indicated for improving circulation in the central and peripheral nervous system, thanks to their vasodilating, antioxidant and fludifying properties. Traditionally, ginkgo is used to relieve heaviness in the lower limbs and the sensation of cold hands and feet associated with minor blood circulation disorders. Ginkgo is mainly used for its neuroprotective effects in the treatment of symptoms related to mild cognitive impairment and neurodegenerative diseases, including early stage Alzheimer's. The benefits of ginkgo mainly concern memory loss, headache and dizziness.

How to use it and contraindications

Ginkgo biloba is mainly used in the form of dry or liquid extract titrated in its main compounds. These extracts are administered orally, at a dosage of 120-240 milligrams, usually divided into two doses for at least eight weeks.

Ginkgo preparations are indicated for the treatment of mild blood circulation disorders, which can lead to heaviness of the legs, swelling of the ankles, capillary fragility and cold hands and feet. Ginkgo is also recommended for treating tinnitus, a phenomenon that leads to the perception of an annoying continuous ringing in the ear. Another important indication of ginkgo concerns the improvement of cognitive functions in the elderly. If after taking ginkgo preparations for a few weeks, there is no benefit, it is good to consult your doctor.

The main side effects of ginkgo include headache, dizziness, gastrointestinal disturbances such as diarrhea, vomiting and abdominal pain, hypersensitivity reactions and bleeding.
In case of undesirable effects attributable to the intake of ginkgo, it is recommended to discontinue use and inform the doctor.

The intake of ginkgo is contraindicated in case of hypersensitivity to its components, during pregnancy and during breastfeeding.

Since Ginkgo biloba has numerous interactions with drugs, it is important to report any ongoing therapies to the doctor, herbalist or pharmacist; for example, the use of ginko is not recommended if you are taking anticoagulants, antiplatelets, warfarin.

Maria Teolis
2971 posts
Previous Post
The story of Andrea Paris, the winner of Tu Sì Que Vales
Next Post
Kate Middleton in the purple shirt is flawless and prepares to become Queen