Ginseng: what it is, properties and effects 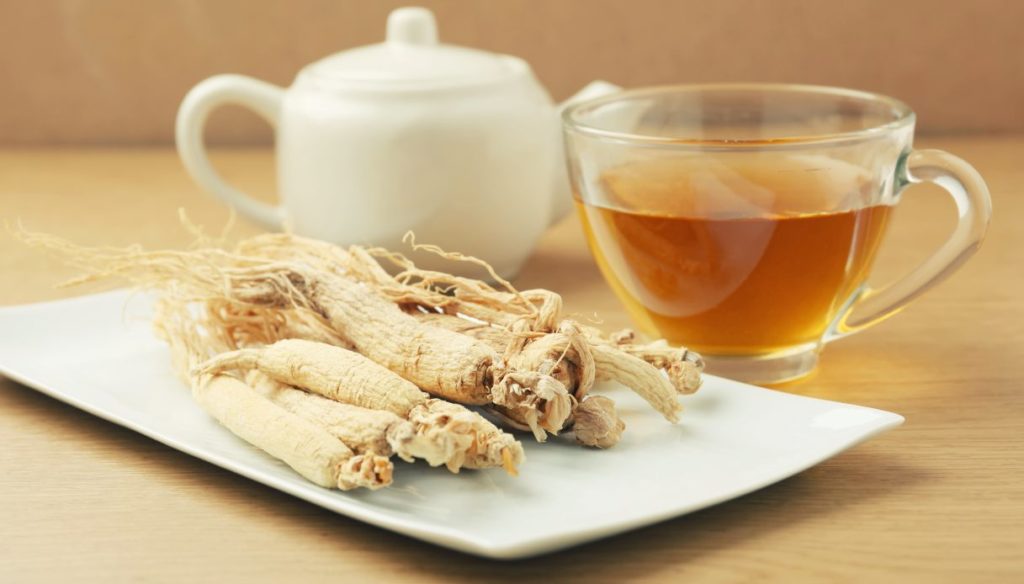 What is ginseng and what is it for

Ginseng (Panax ginseng) is a perennial herb that belongs to the Araliaceae family.
Ginseng plants have erect branches that can reach sixty centimeters in length, palmate-lobed leaves formed by five leaflets and white flowers gathered in umbrellas from which red berries that contain the seeds develop.

It is a species that grows spontaneously in various mountain areas of eastern Siberia, Korea, Nepal but in nature it is now very rare and today the specimens to be used for the marketing of the roots come almost exclusively from crops.

The root of ginseng, which represents the drug of the plant, is tuberized, fleshy, about twenty centimeters long and often has secondary roots that give it an anthropomorphic appearance.
Ginseng possesses immunostimulating and adaptogenic activities which depend on the presence in the root of numerous constituents, including polysaccharides and saponosides known as ginsenosides.

White ginseng consists of the primary root treated with steam and dried, while red ginseng, considered more valuable, undergoes a preliminary treatment in the stove. Both are used for adaptogenic and stimulating effects. American ginseng is instead a different species (Panax quinquefolius) used for the same properties and with the same indications as Panax ginseng.

Properties and effects of ginseng

Ginseng has been used for thousands of years for its properties and in the countries of origin it is considered a panacea. The name Panax derives from the Greek "pan" (all) and "axos" (cure) and underlines the alleged ability of ginseng to treat any ailment.
In fact, the roots of this plant possess tonic, regenerating, adaptogenic and immunostimulating properties. Ginseng is therefore particularly useful for supporting the body's defenses and in case of fatigue, during convalescence or to improve physical and mental performance in very stressful periods. The intake of ginseng is also able to reduce fasting blood sugar and insulin in people with type I and II diabetes. Traditionally, ginseng is also used for the treatment of erectile dysfunction and to improve both male and female sexual arousal.

The molecules responsible for the effects of ginseng are mainly ginsenosides and polysaccharides. The saponin fraction, for example, is able to reduce blood sugar and inhibit the reuptake of some neurotransmitters such as norepinephrine, dopamine and serotonin, improving the reaction to stress, mood and physical and mental performance. The polysaccharides, together with other molecules, are instead responsible for the immunostimulating action.

When and how to take it

Ginseng is administered above all to improve physical and mental performance during periods of high stress and as a tonic and regenerating in case of excessive fatigue, tiredness, lack of energy, concentration and appetite. Preparations that contain ginseng are useful for promoting a good mood, better coping with difficult situations, in nervous and physical exhaustion, but also for improving memory and concentration and preventing aging. Ginseng can also be taken to improve sports performance, stimulate sexual desire and relieve symptoms of psychosomatic illness.

White ginseng and red ginseng are used as a raw drug for the preparation of herbal teas or to make dry or liquid extracts. Generally, for the preparation of decoctions, one gram of ginseng root is used for a cup of water and the infusion should be consumed two or three times a day. Dry and liquid extracts, on the other hand, contain quite variable amounts of the drug and are taken one to four times a day. As for the mother tincture, which is a maceration in alcohol of the fresh plant, 30 drops are taken three times a day, dispersing them in half a glass of water.

The duration of ginseng-based treatments should not exceed three months and if symptoms persist beyond two weeks it is advisable to consult your doctor.

Side effects, interactions and contraindications

Ginseng is considered to be a safe, well tolerated remedy with no major side effects. Its intake is however not recommended during pregnancy, during breastfeeding, in children and adolescents under the age of eighteen.

In predisposed subjects, the use of products containing ginseng can cause hypersensitivity reactions whose symptoms include hives and itching.

At high dosages and for doses over three months, taking ginseng can lead to undesirable effects including insomnia and gastrointestinal disorders such as nausea, vomiting, diarrhea and constipation.

The use of ginseng is not recommended in case of schizophrenia, manic symptoms and if you are taking antidepressant drugs or central nervous system stimulants, as well as oral hypoglycemic agents and anticoagulants. In any case, if you are taking drugs or supplements, it is always advisable to inform your doctor, pharmacist or herbalist before resorting to any natural remedy.

Maria Teolis
2966 posts
Previous Post
Today is another day, Barbara Bouchet confesses about children, loves and the difficult past
Next Post
Joe Biden, all the women he wanted in power