Great expectations for the Street Food Oscar: which will be the best Italian restaurant? 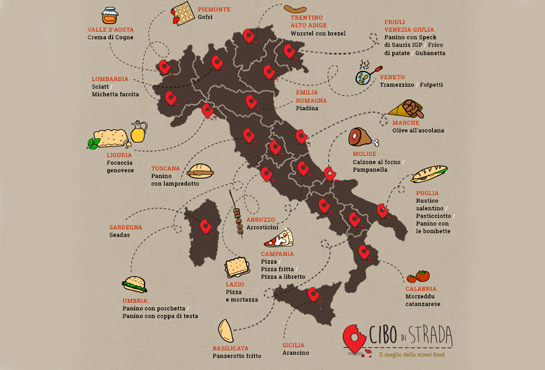 Great anticipation for the final of the first national contest to reward the best street food venues of the Peninsula, "the Oscar of Street Food 2015", announced on the vertical portal CiboDiStrada.it, the first space exclusively dedicated to street food of the whole Country, born from the collaboration between Italiaonline, the first Italian internet company, and Mauro Rosati, one of the leading experts in the Italian agri-food world.

A project born with the aim of giving visibility to this trend, called street food or street food, which contributes every day to bring out the Italian gastronomic heritage with new life and to live an experience linked both to tradition and to originality of our country. On the CiboDiStrada.it portal it is possible to get to know the best Italian street food places, through information sheets accompanied by expert reviews, as well as comments from all users.

The selection of the places on the platform follows the criteria reported in the "Street Food Manifesto": use of quality raw materials, tradition and originality of the recipes, craftsmanship of production, usability and consumption, relationship with the customer and cost-effectiveness. Thanks to the extraordinary social nature of this particular form of catering, the Oscar for street food has met with great success. From the beginning of July until 20 January, the CiboDiStrada.it portal has in fact obtained, from users / consumers, over 47,000 votes assigned to

The ten venues that received the highest number of votes during the competition reached the final that will take place on 25 February at the Enel Point in Via Broletto in Milan – the innovative store, modeled for the quality of customer service. Judging their dishes during the final evening will be a pool of experts who will have the difficult task of awarding the "2015 Street Food Oscar".

The jury of the final:

Lorenzo Gavazzi
2482 posts
Previous Post
Insomnia and memory: the effects of rose perfume
Next Post
Epilepsy: what it is and how to deal with it