Heat stroke and heat ailments, how to recognize them and deal with them 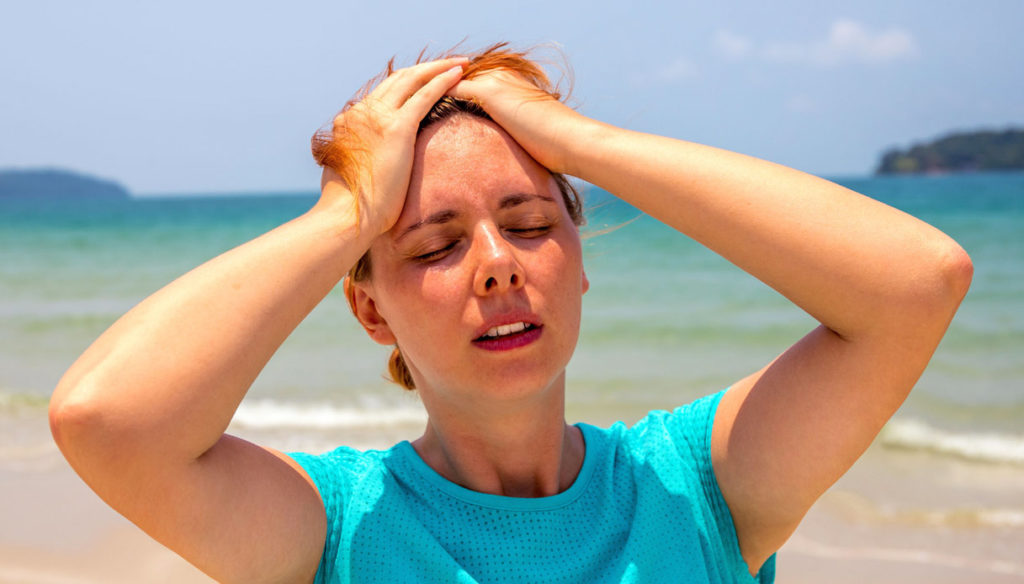 Symptoms for distinguishing heat stroke collapse from sun stroke. And what to do in case of need

Being hot and sweating is completely normal when the outside temperature rises, especially in the presence of a high rate of humidity. But when we begin to have a strange sense of failure, which can even lead to passing out, perhaps even accompanied by nausea, vomiting, some fever line and unexplained muscle cramps, the risk is that of heat stroke and heat collapse. A potentially serious situation, especially for children and the elderly. Which must be recognized and addressed in time.

The major dangers associated with high are called heat collapse and heat stroke. The first is related to excessive sweat loss. When you sweat too much and do not compensate water-salt losses adequately, the circulating blood decreases. In severe cases there may also be loss of consciousness due to shock. In the early stages, you feel weak and sweat profusely. The heartbeat then tends to slow down, blood pressure drops and the skin becomes cold. It is always advisable to call an ambulance and, while waiting, put the unconscious person in a horizontal position and upside down.

The heat stroke is even more serious, and is linked to the inability to dispose of the increase in body temperature. When this occurs before, the sweating stops, so that even when it would be legitimate to sweat given the high environmental temperatures, the skin becomes hot and dry. The heart in response to this situation beats faster and faster because the body has to flow more blood into the blood vessels. But there is also the need to increase the oxygen reserve for the body, and therefore also the breathing becomes progressively more labored. During this whole process, the body temperature rises steeply until it even endangers life. So if someone is in conditions similar to those described, with skin that is hot and without even a drop of sweat, it is better to immediately call an ambulance.

To get to these borderline situations, however, the body's various control systems must be overcome to "self-maintain" at an adequate temperature. The first measure of response to the heat that grips is sweat, through the glands spread a little over the whole body.

But be careful: liquid losses, potentially useful, must be compensated. This is why it is recommended to drink a lot, also to replace the mineral salts lost with sweat which are very important for the good circulation of the blood and for the work of the muscles, including the heart. Elderly people and children, who are more sensitive to any temporary deficiencies of these invisible regulators of cell and muscle function, have to compensate more, if they are the ones who tend to forget most about "drinking".

However, there is an invisible enemy from the correct sweating, which increases the risk for the body not to maintain its normal temperature. It's called humidity. This is dangerous not only because it increases the sensation of heat that we feel compared to the real external temperature, as we are told every day. But also because it fights sweating. For this reason, humid heat is much more dangerous than dry heat: the higher the humidity, in fact, the lower the refreshing effect of sweating. Precisely because the body, which needs so much to refresh itself, is unable to eliminate excess heat.

How to react to heat ailments

The sunstroke is due to the non-dispersion of body heat after prolonged stay in the sun or in very hot environments. It occurs with high fever (the temperature can even reach 40 degrees), decreased sweating, very hot skin, tachycardia and labored breathing. The first measure to take is to remove the patient from the heat source and wrap him with wet sheets. If possible, a fresh shower is recommended. However, the person must be accompanied to the emergency room as soon as possible, being careful not to drop the temperature below 38.3 degrees to avoid sudden cooling.

The collapse from heat or heat stroke, however, is induced by the profuse loss of liquids due to excessive sweating, after exposure to heat in conditions of high humidity (greater than 80 percent). Initially it brings fatigue and weakness, then lowering of pressure, slowing of pulse, drop in pressure and fever appear. The affected person should be taken to the emergency room. In the meantime, the body must be placed in a horizontal position, with the head tilted forward and the legs upwards. If possible, it is better to drink two small glasses of water or other cold liquids in small sips by adding a pinch of salt.

Finally, even if fortunately these are less serious ailments, in this period there is a risk of heat cramps, painful and involuntary contractions of the muscles related to loss of fluids and sodium. They appear after physical exertion at high temperature, greater than 38 degrees. They lead to the feeling that the muscles are hard and painful and can affect the arms, legs and even the abdomen. In these situations, the person should be laid down and the muscular relaxation maneuvers that are normally practiced in case of cramps, such as for sportsmen, should be done. It is also important that the person ingests liquids with water-saline supplements to compensate for losses.