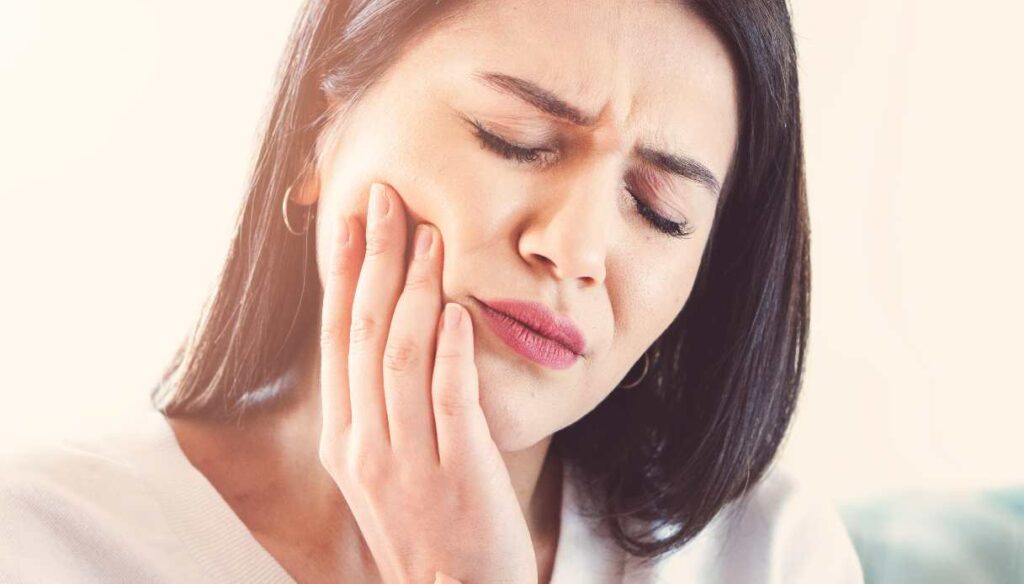 Inflamed gums are a condition that causes gum swelling, redness and pain, symptoms that can be accompanied by bleeding gums and bad breath. Gingivitis can be caused by several factors including trauma: the gums can in fact become inflamed when suffering from bruxism, involuntary grinding of the teeth during the night, or for too vigorous brushing during tooth cleaning.

Inflammation of the gums can then be a consequence of cigarette smoking, excessive consumption of alcoholic beverages or spicy and irritating spices or foods with a particularly hard consistency, capable of creating small lesions of the gum mucosa.

In other cases, on the other hand, inflamed gums are a symptom of a disorder or pathology affecting the teeth and mouth, such as dental caries, abscesses or periodontitis. It is possible that the gums are more prone to inflammation and bleeding also due to food deficiencies, in particular in the case of vitamin C deficiency. Among the causes of recurrent gingivitis there may also be incorrect oral hygiene, not able to remove in a way adequate food residues.

To prevent the gums from becoming inflamed, it is necessary to act on the causes which, as we have seen, can be different. The dentist is the reference figure to help understand the origin of the inflammation and propose an appropriate remedy. In general, when the inflammation is a consequence of bruxism or trauma caused by the toothbrush, it is possible to evaluate the use of special anti-grinding devices or to correct one's oral hygiene by adopting brushes with soft bristles or electric toothbrushes, which do not irritate the gums. Again with regard to oral hygiene, it is important that this is done regularly by brushing the teeth after each meal and using dental floss to clean the spaces between tooth and tooth.

If the inflamed gums are the result of cigarette smoking, abuse of alcoholic drinks or consumption of highly spiced foods, it will be sufficient to change your habits to relieve the symptoms affecting the gums. If, on the other hand, there is a lack of vitamin C behind the recurrent inflammation, it is necessary to follow a balanced diet, rich in fresh fruit and raw vegetables or, possibly, supplement this vitamin. Finally, if the gums become inflamed and bleed due to pathologies of the oral cavity, the dentist will be able to intervene to solve the problem adequately.
Natural remedies for inflamed gums can help relieve symptoms that occur sporadically or while awaiting a diagnosis from your dentist.

Acacia catechu is a tree of the Mimosaceae family whose wood is rich in tannins and flavonoids. Acacia has astringent, anti-inflammatory and antiseptic properties and is used in the treatment of inflamed gums and stomatitis. For this purpose, 20 drops of mother tincture dissolved in a glass of warm water are used to rinse the oral cavity. The pure mother tincture can instead be used for local applications on the inflamed mucosa.

Malaleuca alternifolia is a plant belonging to the Myrtaceae family with leaves rich in an essential oil known as Tea tree oil with antiseptic properties useful in mouth problems including gingivitis, stomatitis, canker sores and pyorrhea. 4-5 drops diluted in a glass of water are used to rinse and gargle in case of inflammation of the oral cavity and throat.

The leaves and berries of Myrtus communis, another plant of the Myrtaceae family, contain essential oil and tannins with an antiseptic, astringent and vasoconstrictive action. The myrtle infusion prepared with 15-30 grams of leaves and berries per liter of water, filtered and left to cool, can be used as a mouthwash in case of inflamed gums that bleed.

The root of Pimpinella major, a small herbaceous belonging to the Apiaceae family, is rich in essential oil, tannins and coumarins useful in the treatment of inflammation of the mouth and throat. Externally, the infusion and mother tincture are used for rinsing the oral cavity to provide relief in the case of inflamed gums.

Potentilla tormentilla is a herbaceous plant with astringent, anti-inflammatory, healing and antiseptic properties, thanks to the content of tannins and flavonoids. The rhizome is used in the form of an infusion or mother tincture diluted in water for inflammations of the oral mucosa, in case of gingivitis and bleeding.

Ribes nigrum, a plant of the Saxifragaceae family, has anti-inflammatory and vasoprotective activity. The properties of black currant are given above all by the flavonoids, present in the leaves, fruits and buds. In case of inflamed gums, various preparations based on black currant are used externally to rinse the mouth, including the infusion obtained from the leaves, the mother tincture and the bud extract.

Salvia officinalis, an aromatic plant of the Lamiaceae family, is a species widely used for health, as well as in cooking. Sage leaves are in fact rich in beneficial substances, including essential oil and flavonoids, which boast numerous properties. In case of inflamed gums, the mother tincture of sage is used, alone or mixed in equal parts with the mother tincture of tormentilla, for localized applications on the area to be treated.

Thyme (Thymus vulgaris) is an aromatic belonging to the Lamiaceae family. Like sage, thyme is also widespread and known for its use as a flavoring, but its use is not limited to cooking. The leaves and flowers of thyme contain essential oil and other active compounds with antiseptic properties and can also be used to relieve inflamed gums or to strengthen the gums in case of pyorrhea. The infusion, the mother tincture diluted in water or a drop of essential oil of thyme dispersed in a glass of warm water or herbal tea, used as a mouthwash, can in fact relieve inflammation of the oral cavity.

Maria Teolis
2972 posts
Previous Post
God help us, Can Yaman arrives
Next Post
Beatrice Borromeo, between country life and a documentary on the women of the mafia