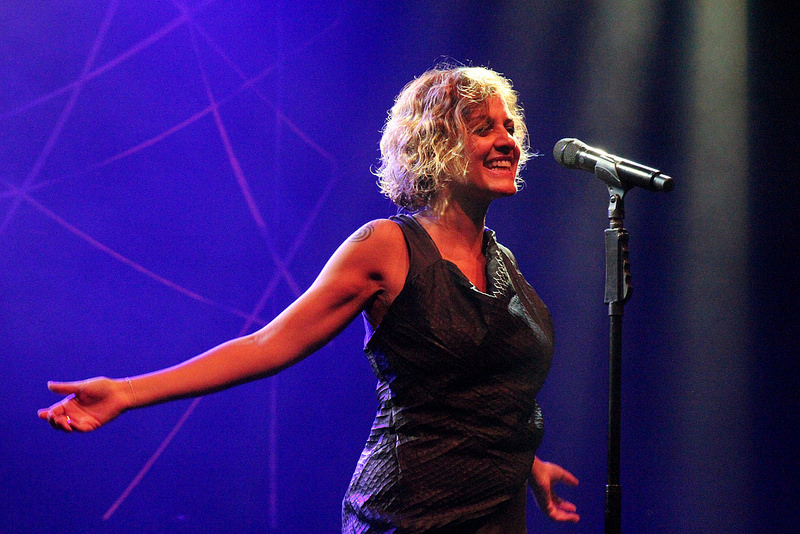 Irene Grandi is a great name in Italian music. We retrace the career of this singer-songwriter who moves between rock, soul, rap, blues and jazz

The singer-songwriter Irene Grandi was born in Florence on December 6, 1969. After graduating from the scientific high school, Irene joined some musical groups, such as "I Goppions", "La Forma" and "Le matte in trasta", with which performs in various Tuscan clubs. Marco Parente, Simona Bencini and Stefano Bollani collaborate with her. In 1992 he decided to pursue a solo career and began writing the lyrics of his songs; to support her in this work is Lorenzo Ternelli, aka Telonio, who will follow her for about ten years. In 1993 he released the first single entitled "A cursed reason"; this song is noticed and appreciated by the producer of the CGD record company, Dado Parisini, who makes her sign the first record deal. The song is then presented at Sanremo Giovani, becomes a single CD, is broadcast on radios from all over Italy and is accompanied by Irene's first video clip. At the end of 1993 his first television appearance also arrives. The following year the singer presented the song "Fuori" at the Sanremo Festival among the "Nuove Proposte" and released her first album "Irene Grandi". Here begin the first major collaborations that will accompany the artist throughout his career.

The song "T.V.B." was, in fact, written by Lorenzo Cherubini, or Jovanotti, while "Married! Now !! ”sees the signature of Eros Ramazzotti. The debut album is also presented in Germany: the duet with Klaus Lage "Weil du anders bist" conquers the top of the German chart. In 1995, Irene Grandi released her second album, "On vacation for a lifetime", and the sales success is overwhelming (she sells 500 thousand copies). Many hits belong to this work, such as "Bum Bum", "Love flies", "Sweet love", "On vacation for a lifetime" and "Bad girls", and several collaborations with great artists, such as Jovanotti and Pino Daniele. With the great Neapolitan singer-songwriter, the same year he also recorded the song "If you want me". The following year Irene approaches the world of cinema: she takes part in the Giovanni Veronesi film "The Barber of Rio" alongside Diego Abantantuono. In 1997 he returned to his first love and released his third album, "Fortunately unfortunately"; compared to previous works, here the sounds change, now more tribal and soul, testifying to the continuous desire of the singer-songwriter to experiment. In 1998 he released his second album conceived for abroad: "Irene Grandi" comes out on the Iberian peninsula with songs sung in Spanish; followed by a long tour in Spain, full of rewards.

On his return to Italy he published "Verde rosso e blu" with which he married rock. I wait for this that binds her to Vasco Rossi, another great name that will be at her side for many jobs. In 2000 he returned to the Sanremo Festival with the song "Your girl always", the text of which was written by Blasco, placed on the second step of the podium. Following this success he duets with the tenor Luciano Pavarotti and takes part in the event "Pavarotti and Friends". In 2001 the album "Irek" was released, which contains his greatest hits and two unpublished. The following year, the "Kose da Grandi" CD-ROM was released with music and video tracks. Also in 2002 she sings in Salt Lake as part of the world presentation of the Winter Olympics which will take place in Turin in 2006. In 2003 Irene Grandi released a very rock album entitled "Before leaving", in which there are songs written by Vasco Rossi and Gaetano Curreri of the Stadio. 2004 sees the singer try her hand at another test: she leads the Festivalbar alongside Marco Maccarini. The following year he released the album "Indelible" with "Let it go" and "I can't resist" inside, he collaborated with Edoardo Bennato and put on the market the DVD "Irene Grandi Live". During 2006 the artist participated in numerous awareness campaigns, in particular in favor of the remote adoption of Indian and African children.

2007 sees the release of "Irenegrandi.hits"; as the title says, this album contains 34 hits, the unpublished "Burn the city", a notable success both from critics and sales and some covers. In 2008 Irene Grandi published her autobiography "Diary of a bad girl". The same year the album "Songs for Christmas" was released, which, the first album of covers dedicated to Christmas by an Italian singer, obtained the platinum album thanks to the sale of 105 thousand copies; also in this case there are duets with celebrities from the world of entertainment, namely Alessandro Gassman and Stefano Bollani. In 2009 Irene took part in the "Friends for Abruzzo" concert, an event in support of the people affected by the earthquake. The following year he returned again to the Sanremo Festival with the song "Halley's comet", which was included in the album "At the gates of the dream"; the whole work proves to be a great success for the Florentine singer-songwriter and a new beginning for her career that moves between rap, soul, rock, blues and jazz. Over the past few years, many artists have collaborated with him in drafting the texts: Tiziano Ferro, Francesco Bianconi dei Baustelle, Elio e le Storie Tese and many others. In 2012 the album "Irene Grandi & Stefano Bollani" was released with some covers and a couple of unreleased tracks. In 2015 Irene is back at the Sanremo Song Festival with the song "Un vento senza nome".