Letizia of Spain, jewel look with pearls and diamonds. And take risks with a band hat

Letizia di Spagna seduces with the ice dress, edged with crystals. And then he shows up with a headband hat copying Kate Middleton 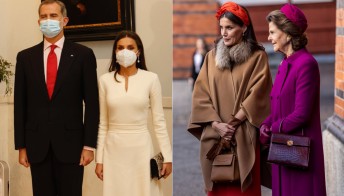 Letizia of Spain arrived in Sweden for a three-day state trip with her husband Felipe. The first total white look is fabulous, a real jewel outfit consisting of a splendid asymmetrical dress of which the designer remains a mystery. Then the Queen risks it all with a Kate Middleton-style headband hat.

Letizia of Spain turned to Stockholm climbing the stairs of the plane arm in arm with Felipe, in his red Hugo Boss coat, which has been part of her wardrobe since 2015. 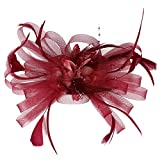 As soon as she landed in Stockholm, Reina Letizia attended, with the King, a reception at the Spanish embassy in the Swedish capital, as shown by the photos shared on the Twitter profile of the Royal House. Her Majesty showed up in a magnificent white dress. It is a midi dress with clean and minimal lines, as Letizia likes them, with an asymmetrical skirt, marked at the waist by a band belt, sewn on the dress, long sleeves, small neckline edged with diamonds, like the hems of the sleeves and of the skirt.

The name of the designer who created it remains unknown, even if it is already the third time that it is worn by Felipe’s wife. But she brings it to Stockholm with an extra detail, namely a pair of sheer and glittery tights. In fact, usually Letizia never wears socks, not even in winter, but due to the cold temperatures in Sweden she had to make an exception.

Sheer tights You can buy online your tights like those of Letizia di Spagna 16,00 EUR Buy on Amazon

Donna Letizia paired the dress with her Magrit décolletée and coordinated clutch in reptile. As jewelry she chose only a pair of dangle earrings with diamonds and a round pearl.

The next day Letizia and Felipe were welcomed by the Swedish royals, Carlo Gustavo and Silvia. For the meeting, Reina opted for a decidedly winter look, totally signed by Carolina Herrera (coat, dress, shoes and bag). She wore an orange dress, which under the outerwear gives the idea of ​​being a sheath dress, but in reality hides a wide-sleeved, cape-like bodice. Over the dress she wears a camel-colored cape coat with a fur collar which she has paired with leather gloves, a rigid bag with a single handle and shoulder strap (940 euros) and a pair of suede pumps with a high, thin heel.

Letizia of Spain, the band hat as a tiara

To amaze in the look of the Reina is the headdress. Letizia rarely wears hats, we saw her wearing them in England when she met Elizabeth and Kate Middleton. The choice of the Sovereign on this occasion is singular. In fact, she opted for a headband or headband hat with floral decorations, orange, in combination with the dress, created by Cherubina. Cost? 140 euros.

This particular headdress, considered very bon ton and even a little vintage, halfway between a real hat and a wide headband, has been transformed into a trend by the Duchess of Cambridge who often uses it in winter on more informal occasions. For the Royals this hat gives the possibility to be used as if it were a kind of tiara.

Letizia is extremely chic but her look lacks the usual grit that has accustomed us to. On the other hand, the occasion requires compliance with the court dress code. Its strong point are the warm colors of autumn that give particularly to the Reina.