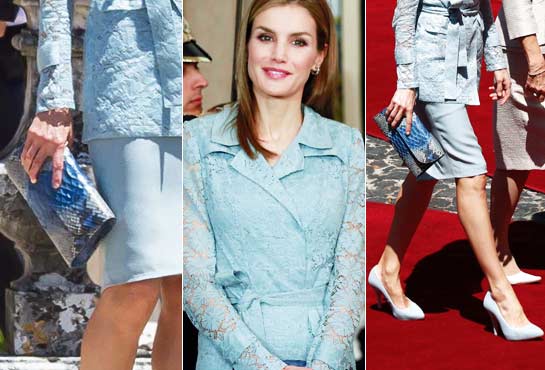 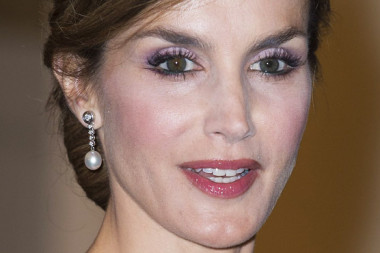 Letizia of Spain, queen of style

Felipe VI and Letizia of Spain made their second official trip to Portugal, after that of last June 30 in the Vatican to meet with Pope Francis.

Letizia of Spain who has shown on several occasions, even before the coronation, to have good taste in terms of look, often choosing low-cost but effective and modern outfits, she presented herself at the Belem building with a set to say the least out of tune. Starting with the color, light blue, a shade more suited to a mature sovereign like Elizabeth II of England (88 years) than to the much younger Spanish queen (42 years old next September).

Letizia wears a tailored suit with a lace jacket, shawl neckline and a bow-closed belt that creates a dressing gown effect. Fortunately, the queen has a perfect line. The pencil skirt is just above the knee, but something is not right in the hem, perhaps weights have been inserted to prevent a gust of wind from lifting it, as happened several times to Kate Middleton.

The shoes are classic décolleté, naturally light blue, with a not exaggerated heel as the bon ton wants. Of the look of Letizia only the clutch is saved, obviously in blue-blue tones, in python, a true passion of the Spanish sovereign.

We hope this put was just an accident on the way and that Letizia recovers her style as a strong and modern woman.

Federico Viri
1040 posts
Previous Post
Cristina Chiabotto got married: a fairytale wedding for the former Miss Italy
Next Post
Low life, the "drawbacks" to be reckoned with