Letizia of Spain, the triumph of the tailored suit and the shirt-tie is to be copied

Letizia of Spain focuses on Carolina Herrera’s trouser suit and triumphs. While the shirt with a tie bow is worth trying 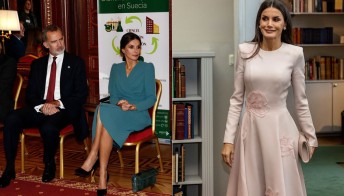 Letizia of Spain, dress in 3D and accident with the bag

Letizia of Spain resumes her commitments at the Zarzuela Palace and does so with a surprise meeting with the tennis player Garbiñe Muguruza. La Reina shows up for the appointment with a sophisticated petrol-colored suit by Carolina Herrera which is an idea for everyone.

Letizia of Spain, audience at the Palace

Shirt with bow You can buy online a version similar to Letizia di Spagna’s shirt. 30,33 EUR Buy on Amazon

After having enchanted the world during her state trip to Sweden where among the different looks she presented herself with a magnificent evening dress by H&M, Letizia of Spain in Madrid begins her work agenda with a last-minute commitment, which the Palazzo had not in fact announced.

Letizia of Spain, the suit by Carolina Herrera

In this case, she opted for a tailored-cut trouser suit by Carolina Herrera. The suit consists of a long men’s jacket and cigarette trousers. The peculiarity of the suit lies in the oil green color, very unique. Letizia loves these classic looks that she makes original by playing with colors. For example, her pink suit is enchanting, copied by all the crowned heads, including Kate Middleton.

Letizia of Spain, the shirt with the bow

The outfit created by Carolina Herrera has been in the Queen’s wardrobe since 2019 and has recycled it twice more, most recently in February 2021. This time she paired it with an ultra-chic white shirt with a bow at the neck by Hugo Boss, which however Donna Letizia wears like a tie. While to give impetus to her figure she chose a pair of two-tone pumps, by Magrit, her favorite footwear brand.

As usual, her jewels are kept to a minimum: her bamboo hoop earrings and Karen Hallam’s ring, a gift from her daughters Leonor and Sofia. While her hair is left to fall smoothly over her shoulders.

A decidedly simpler outfit than those shown at the Swedish court during the state tour.

Giovanna Pirri
5756 posts
Previous Post
What kindness is, why it matters and how to practice it
Next Post
Federica Pellegrini, the last race of the Divina: “It was beautiful”