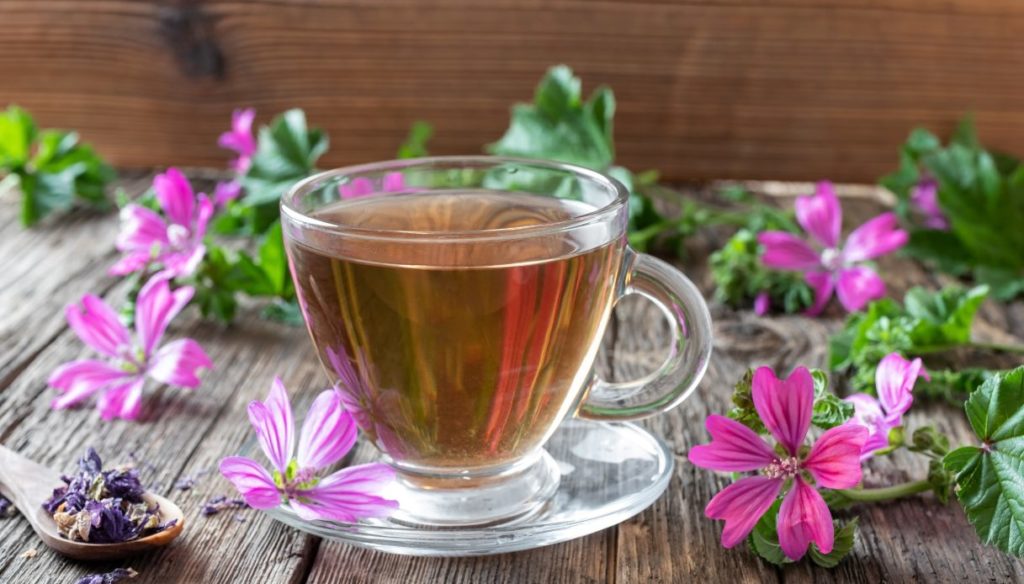 Mallow is used as an emollient in case of cough, skin and mucous membrane irritations and to relieve gastrointestinal disorders

Mallow is a small perennial or biennial herbaceous plant, which belongs to the Malvaceae family, the same as marshmallow, hibiscus or karkadè and cotton.
The scientific name of mallow is Malva sylvestris and it is a very widespread species in temperate climate regions, where it grows spontaneously in uncultivated land, in cultivated fields, in meadows, in flower beds and along roadsides.

The mallow plant has a very robust root system from which a straight and little branched stem develops that can reach very variable heights, from 30 centimeters to over one and a half meters. The stem bears petiolate and palmate leaves, whose diameter can greatly exceed that of an open hand. The leaves consist of five or seven lobes with a toothed margin and a surface covered with numerous hairs.
In spring, the mallow blooms, producing very pleasant-looking and fragrance-free flowers, clustered at the axil of the leaves. The flowers of the mallow are formed by a three-piece chalice and a corolla of five purple petals with evident purple veins.
After flowering, the mallow bears fruit giving rise to fruits similar to small buttons whose color changes from light and bright green to brown as it ripens.

The mallow drug, that is the part of the plant that has the highest content of active constituents, is represented by leaves and flowers, rich in mucilage, flavonoids, tannins, vitamins A, C and B1 and mineral salts.
Mallow is used for its emollient and anti-inflammatory properties on mucous membranes: its use is helpful in case of diseases of the oral cavity and vaginal mucosa, inflammation of the esophagus, stomach and intestines, respiratory system disorders such as cough and sore throat and gastrointestinal problems. Traditionally, mallow is also used to stimulate and facilitate milk secretion during breastfeeding.

How and when to use mallow for health

The mallow drug consists of the flowers and leaves that are harvested in the period from June to September.
The flowers contain between 6% and 10% of mucilages (complex polysaccharides) and flavonoids, while the leaves contain mucilages for about 8%. Mallow therefore has emollient and anti-inflammatory properties that can be used to soothe irritation of the skin and mucous membranes.

In herbal medicine, the flowers and leaves of mallow are used in cold infusion, placing a handful of leaves in water and letting them macerate overnight. The infusion can then be used, after filtering it, both for internal use and for external use at room temperature or slightly heated.

The oral intake of mallow-based infusions is useful, for example, in the case of gastric and duodenal ulcers, gastritis, inflammation of the bladder and intestines and in the treatment of diarrhea, mild constipation and colic.
In addition, mallow infusions are recommended to relieve dry cough and soothe inflammation of the pharynx, larynx, throat and esophagus.

Used as a mouthwash for mouth rinses, mallow infusions calm the inflammation of the oral cavity; in the same way, they can be used for external vaginal douches in case of irritations that cause itching or other discomfort.

Also for external use, foot baths, hand baths, poultices and other applications on the skin of the face and body are used against irritation and dry eyes, dermatitis, urticaria and small wounds.

In addition to Malva sylvestris, other varieties of mallow are also used with the same indications, such as Malva negleta and Malva nicaeensis.

Use of mallow in the kitchen

Mallow, in addition to the properties and health benefits we have seen, is also an edible plant that can be consumed, flowers, leaves, immature fruits and stem marrow.

Young leaves or leaves harvested before flowering are more tender and can be added whole to salads and soups, while larger ones are harvested during or after flowering and eaten in pieces. The flavor of the mallow leaves is neutral and the cooked consistency is slimy due to the richness in mucilage. This makes mallow leaves perfect for thickening soups and soups; if, on the other hand, you want to use the leaves in cannelloni fillings, savory pies, ravioli or omelettes, you can mix them with other green leafy vegetables to mask the consistency, if you don't like it.

The pith of the stems is obtained by peeling the young stems of the plants and is eaten raw or cooked, in salads and soups.

Finally, the flowers and the crunchy unripe fruits are used only raw to decorate salads or other cold summer dishes.

Contraindications, side effects and interactions

Mallow is a safe remedy, free from toxicity and health risks and is one of the few plants that can also be used during pregnancy and breastfeeding and for the treatment of children.

Preparations based on mallow are contraindicated only in case of hypersensitivity or allergies to one or more components of the plant and in the period preceding surgery.

As for the possible interactions, the prolonged use of mallow could reduce the absorption of drugs and supplements taken at the same time due to the high content of mucilage.

Maria Teolis
2965 posts
Previous Post
George Clooney, the darkest moment of his life
Next Post
Renato Zero and his son Roberto Anselmi Fiacchini: the special bond and their touching story