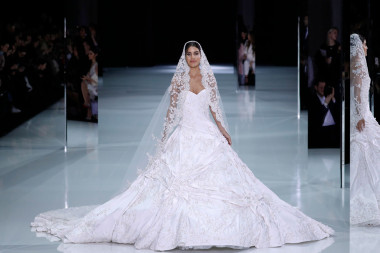 The wedding dresses of Ralph & Russo, the brand chosen by Meghan Markle

Meghan Markle has entrusted the creation of her wedding dress to the house Ralph & Russo. To report the indiscretion is the Daily Mail that gives it for sure.

Rumors about the Australian duo Tamara Ralph and Michael Russo have been around for some time. Especially since the bride's best friend and stylist, Jessica Mulroney, had organized a meeting at the Kensington Palace with the two stylists. The brand has a high fashion and a ready to wear line and specializes in luxury accessories and gift items.

The dress made for Meghan will cost 100 thousand pounds (over 113 thousand euros). At first it was to be borne by the bride but now it is certain that it will be financed by the Windsor family. Basically it is a marriage that will have an important political and social impact.

Although Harry's girlfriend has always said he doesn't want pompous clothes, read "Kate Middleton", his will be sewn entirely by hand and will be covered with pearls. Luckily he wanted something simple!

It may be that Meghan gives up on white, being divorced, and therefore opts for a colored dress. Not inconsiderable detail, since it would be contrary to the Court protocol. Knowing the designers, it is also likely that the former actress will present herself at the altar with an outfit that is anything but traditional. Ralph & Russo created for Meghan the evening dress with transparent bodice, immortalized in the official photos of the engagement with Harry. Detail that aroused quite a few controversies.

On May 19, the wedding day, Markle will wear the wedding dress in question during the religious service and at the reception at St George's Hall in Windsor Castle. While he should change for the party organized by Prince Charles at Frogmore House.

Harry will instead wear a Burberry designer suit.