Melania Trump chooses a black outfit for D-Day celebrations and challenges Brigitte Macron in white. The two First Lady ignore each other 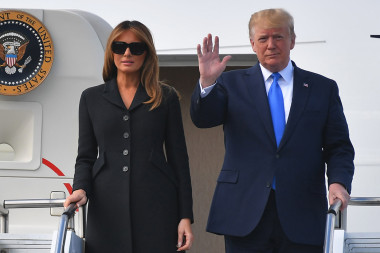 Melania and Donald Trump arrived in Normandy to celebrate the 75th anniversary of D-Day.

The First Lady came down from the Air Force One showing off a total black look: flared black coat dress, buckle shoes and stiletto heel, black glasses. An outfit that we could define as mourning, as a sign of respect for the victims of the greatest military operation of the Second World War.

The American President and his wife leave the plane and join hands, as is now customary after the angry gestures of Melania a few years ago.

The two are welcomed by Emmanuel and Brigitte Macron. The latter sports a white look: a white coat and sheath in contrast with Lady Trump's black. The two women walk side by side on the red carpet but don't interact, they don't even look at each other. Melania is sharp, Brigitte is cold. Perhaps the Première Dame did not like the exchange of kisses between Melania and her husband Emmanuel and ignoring "the American colleague", she wants revenge. It is not in fact the first time that Brigitte and Melania meet, but this time it seems they have put cordiality aside.

The Tycoon's wife and the French president greeted each other warmly the day before in Portsmouth, while they witnessed the commemoration of the Normandy landing in the presence of Queen Elizabeth who gave a moving speech.

Melania Trump enchanted London for three days, showing off splendid outfits: from the red dress by Givenchy, a tribute to Meghan Markle, to the evening dress by Dior beaten however by Kate Middleton, up to the magnificent white dress inspired by Lady Diana, signed Dolce & Gabbana.

Now in France, it puts a strain on Lady Macron, known for its elegance and its Louis Vuitton branded suits.