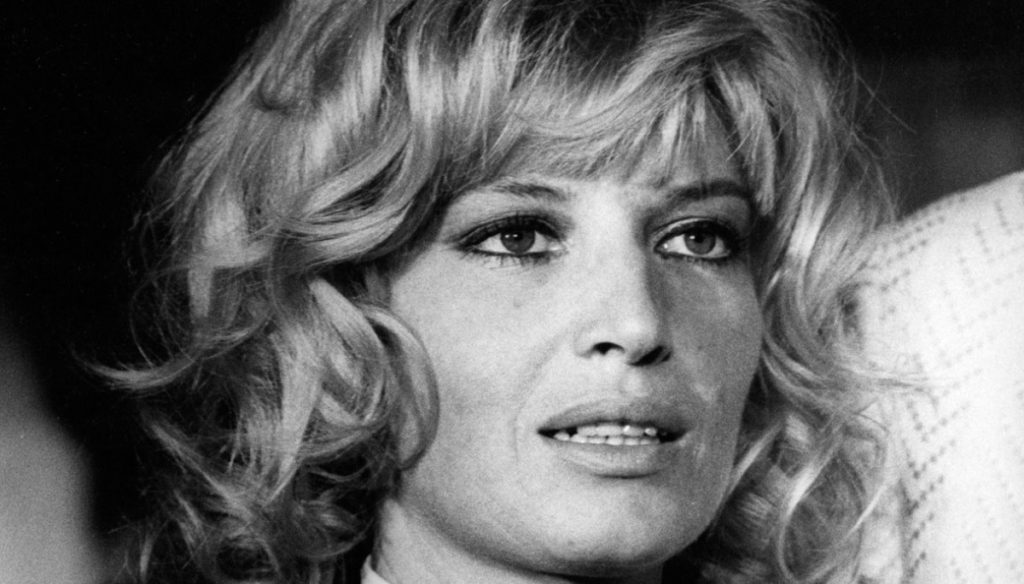 Monica Vitti celebrates another birthday away from the world because of the disease that has affected her. Lina Wertmuller remembers the time when she cut her new dress

Monica Vitti turns 88, she was born on November 3, 1931. For her it is yet another birthday away from the world due to a degenerative disease similar to Alzheimer's. However, she continues to make the public's heart beat with her hoarse voice, her intense gaze and her dramatic roles that have made her a timeless icon.

Vitti remains a point of reference for the new generations of Italian actresses such as Pilar Fogliati who claimed that she spoke of Monica as her model. The Roman actress is immortalized in Anne Carson's poetry, I want everything. The poet in Kant’s Question about Monica Vitti and Ode to the Sublime by Monica Vitti has transformed Antonioni's muse into something similar to Platonic ideas and the Kantian thing itself.

Last year Monica Vitti's birthday came a few days after the death of Carlo Giuffrè, the great Neapolitan actor. In 1968 the two were the protagonists of The Girl with the Gun, a masterpiece by Mario Monicelli, in which Giuffrè played the Sicilian Vincenzo Macaluso, who seduces and abandons an extraordinary and unforgettable Monica Vitti.

In a recent interview with Corriere della Sera, Lina Wertmuller, another myth of Italian cinema, recounts this episode about her: “We were in Paris, in the theater. Everyone had to act in overalls, she didn't want to. I found that a blue voile dress had arrived and that she had shredded the suit. So, I cut up the dress, had the suit repaired and said 'Put this on, Ceciarelli, otherwise I'll split your face'. Ceciarelli was his real surname ". After that the two women no longer worked together. Maybe, explains the director, they both didn't want it.

Monica Vitti becomes a true diva when in 1962 she arrives at the Venice Film Festival. Her pouting-faced photos with St. Mark's Basilica in the background turn her into an icon. In 1995 the actress received the Golden Lion for Lifetime Achievement. In 2018, the Festival wanted to celebrate it with memories and the special tribute of some journalists, its hardcore fans

Elisabetta, nephew of Michelangelo Antonioni, spoke about Monica Vitti on television at La Vita in Diretta where she said: "Once I went to the set of the" Red desert "in Ravenna and saw her sitting on the bed where she had to shoot a scene almost d ' love. She was filing her nails, then she was called to turn and immediately entered the part, completely. I marveled at his great professionalism. "

He then described when he first met Vitti, who was romantically linked with Antonioni: "It was a family meeting, my uncle introduced us to this actress who for us was the person he loved. The fact that he brought her home showed a great love for her. " The great director's granddaughter also went on about a funny episode where Monica was very embarrassed, demonstrating the actress's authenticity: "I remember once Monica tried to take a slice of ham, but she fell on the table and became purple. My uncle, who was always very ironic, told her seriously that if he continued like this he would no longer carry her. I understood that she was joking, she didn't and she panicked. "

Cinecittà paid homage to Monica Vitti with a major exhibition in Rome, in the Spazio dei Dioscuri at the Quirinale. La Dolce Vitti is a photographic exhibition, conceived and organized by Istituto Luce Cinecittà, created on the occasion of the 50th anniversary of the famous film, The girl with the gun. The exhibition traces Monica Vitti's career and life through rare shots. The actress said of herself: "I have dedicated my life, my mind, my eyes, everything to my work. I learned a lot from cinema and I think I gave everything I could give. " Vitti is the female symbol of Italian cinema, the anti-diva par excellence, she knew how to make people laugh and cry, she penetrated to the core with her hoarse voice, her out-of-ordinary beauty and her masterful acting.

Monica Vitti's husband, Roberto Russo, broke the silence on his wife's health a few months ago. She disappeared from the scene for a long time due to an illness similar to Alzheimer's – the last appearance on TV dates from 1994 to Domenica In. does.

The photographer and director told Cinecittà: “Several times the news has surfaced that my wife Monica would have been hospitalized in a specialized Swiss clinic for some time. I don't understand how it was born and what the source of this fake news is. " Roberto Russo therefore intervened to categorically deny that Monica Vitti is hospitalized in Switzerland. The actress is located in Rome and has always been looked after by her husband with the help of a carer.

I would therefore like to deny this rumor that persistently circulates, breaking for a moment that confidentiality that I have kept in recent years. Monica has always lived in Rome at our house and is assiduously assisted by me, with the help of a caregiver. I hope I have clarified the misunderstanding.

Monica Vitti is also a myth for her colleagues. The great actress Vanessa Redgrave confessed: "I wanted to be like Monica Vitti". The British star refers to when she worked with Michelangelo Antonioni, longtime partner of Vitti, in Blow-up: “My God, I will have a role like Monica Vitti !. She is an 'excellent' actress: I loved her, I wanted to be like her, and also blonde like her … but I had nothing of Monica! My hopes were in fact futile, and Michelangelo said he wanted me with black hair and white stripes. We will have shot seven or eight different hairdressers, but all over London nobody really understood what Michelangelo wanted. "

Monica Vitti did not have an easy life. Misunderstood by the family, his childhood was sad. For this reason she started acting, as she confessed in one of her books: I am an actress in order not to die. "When at 14 and a half I had almost decided to stop living, I realized that I could do it, to continue, only pretending to be another, making me laugh as much as possible." Of course, then it has had many successes and awards. But in maturity she has not been able to enjoy honor and fame, since for years she has been struggling with a degenerative disease, similar to Alzheimer's.

Monica Vitti is the example of a real woman (LOOK AT THE PHOTOSHISTORY) who has never needed plastic surgery to establish herself as an icon of beauty and style. Several times she said that the producers wanted to make her nose narrow, a real nightmare, but in the end she won. Not only that, because she managed not to be touched up, but above all she showed that to be sexy you just need to have charisma.

A few years ago the press-agent Enrico Lucherini had revealed to Panorama the merits and defects of the great diva and some really funny anecdotes. Like the time Vitti had the plane stop from Catania to Rome, "with the propellers already going". "After all, Monica was so alienating and modern." On the set with colleagues he got along quite well, but he often said his and there was no lack of quarrels. Lucherini remembers that during the filming of The Chastity Belt: “he quarreled with Tony Curtis and on the second day the two were already speaking through third parties! For the rest, she was rather nice with her colleagues, with Sordi they were just the golden comic couple, very nice, every time I saw them together they had a lot of fun ".

The press agent then revealed that Monica is no longer speaking: "he is another person, unfortunately".

Instead, in an interview some time ago on the newspaper, Renzo Arbore told the episode in which he became aware of the disease that affected Monica Vitti:

I realized that it was not too well years ago, at a dinner, it must have been 1990. She asked me to borrow the phone to make a call and once she returned to the table she did not return it to me. It seemed strange to me. A few minutes passed and I asked her if she was done. She had forgotten that she had borrowed it from me. It was the last time I saw her.

Monica Vitti is not only a myth of Italian cinema, but has played an important role in the relationship between Maurizio Costanzo and Maria De Filippi. The presenter long ago told how the Roman actress encouraged their love story. Costanzo explains: "When Maria came to work in my company, Monica Vitti said to me: That girl has a strong voice like mine: she brings good luck"

Vitti had already understood everything, she knows about love. Costanzo and De Filippi have been happily married since 1995.

Monica Vitti was born on November 3, 1931 in Rome. She is one of the actresses most loved by the public, but also by the critics who have rewarded her with numerous and prestigious awards.

He worked with the greats of Italian and international cinema, from Monicelli to Scola. In her life she had three great loves: the director Michelangelo Antonioni, the director of photography Carlo Di Palma and Roberto Russo who became her husband.

Unfortunately today Vitti is suffering from a disease similar to Alzheimer's. And in moments of lucidity she decided to retire so as not to experience her suffering under everyone's eyes.

Monica, for us you are a myth and a timeless icon!

Lorenzo Gavazzi
2338 posts
Previous Post
Your baby is 5 months old: the fourth week
Next Post
Autumn fruit: the virtues and benefits of chestnuts with pomegranate