Moringa: benefits, contraindications and use as a supplement 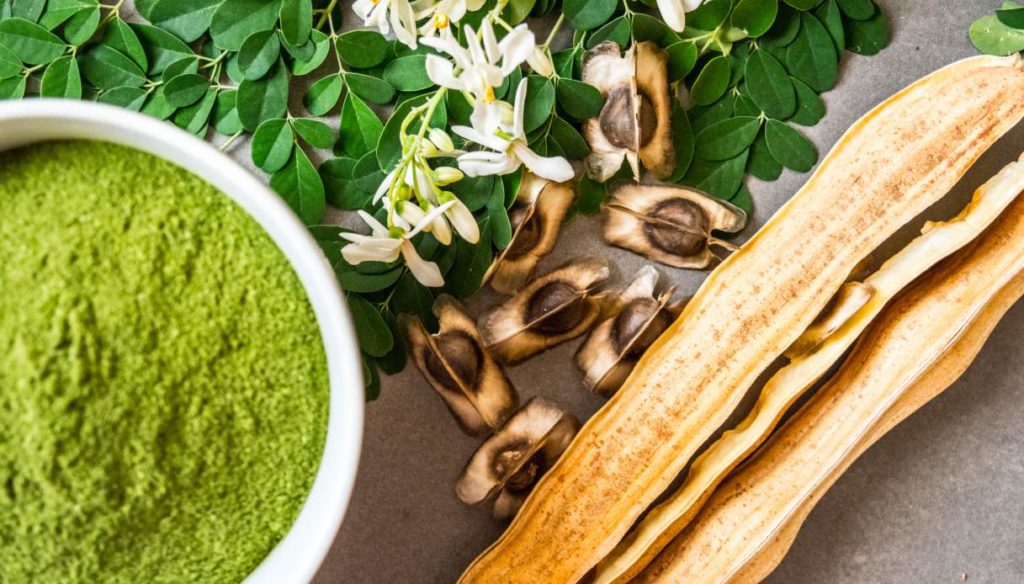 Moringa is a superfood with a high nutritional value, used as a supplement due to its many health benefits

The moringa genus includes thirteen species, of which Moringa oleifera is certainly the best known and best known. It is a tree belonging to the Moringaceae family, originally from India and now widespread in different areas of the world, thanks to its adaptability to very different environmental conditions.

Known as the miracle tree, the moringa plant can reach ten meters in height, has an erect trunk, thin branches and imparipinnate leaves composed of oval leaflets. The flowers of the moringa are inflorescences gathered in panicles hanging at the axil of the leaves, they are fragrant, white or cream colored. After flowering, the fruits develop, pods measuring 20 to 60 centimeters long containing up to 35 seeds, rich in proteins and oil.

Moringa leaves, flowers, pods, seeds and roots are edible and in the countries of origin they are used for food consumption, in traditional medicine and in cosmetics. In particular, the leaves and the oil extracted from the seeds are used, known as Ben or Behen oil. The leaves are in fact rich in proteins, minerals, carotenoids and antioxidants, while the oil is known for its resistance to oxidation and rancidity and is used for food and cosmetic purposes. The roots, which have a strong horseradish-like flavor, are instead used as flavoring. With us, moringa is available in the form of a dietary supplement, oil and dried and chopped leaves to prepare herbal teas.

The health benefits of moringa are due to a phytocomplex that includes numerous substances. The various parts of this plant are in fact rich in fiber, proteins, essential amino acids, fatty acids, vitamin A, minerals – in particular iron and calcium – and flavonoids, to which phenolic acids, alkaloids, terpenes and sterols are added. In addition to having an important nutritional value, so much so that it is considered a superfood, moringa also boasts therapeutic properties that have always been exploited in traditional medicine. Leaves, roots, seeds, bark, flowers and pods are used by indigenous peoples for:

When to take it as a supplement

Given its properties, moringa can be taken to keep the body healthy, protect the cardiovascular system and the liver, reduce excessive fatigue, preserve cognitive and muscular functions and maintain a good structure of teeth and bones. In the change of seasons, especially during the transition from autumn to winter, it can be useful for increasing the immune system and helping the body to defend itself from the attack of viruses and bacteria. In flu states, moringa can be useful for reducing fever, relieving muscle and joint pain, and supporting the immune response. Moringa-based supplements can then help in case of vomiting and diarrhea, inflammatory pains, asthma and allergies and to protect the gastric mucosa. Local applications on the skin can instead help in case of boils, acne, excess sebum, bacterial and fungal infections or to speed up the healing of small wounds.

There are many moringa-based supplements on the market, easily available in herbalist's shops and pharmacies. Moringa can be purchased in the form of dried leaves to be used in herbal tea and in powder, always obtained from the leaves. Moringa powder can be consumed by dispersing it in yogurt, smoothies, or added to recipes of vegetables, salads and homemade desserts. As well as orally, moringa leaves can be used for compresses on skin and hair to reduce excess sebum and treat seborrheic dermatitis, acne and boils. Moringa is also sold in capsules and tablets, prepared with the powder from the leaves or seeds of the plant and in the form of a cosmetic oil to soften and nourish the skin or to treat scalp disorders.

Although the use of moringa and its extracts is considered safe, moringa-based supplements should not be used during pregnancy and breastfeeding without first consulting your doctor. Moringa should not be taken by people with allergies to one or more components of the plant. Furthermore, moringa root, when consumed in large quantities, can cause nausea, vomiting, dizziness and other unwanted effects.
If you take other drugs or supplements, it is good to ask your doctor, pharmacist or herbalist for advice before resorting to remedies based on moringa, to avoid any interactions.