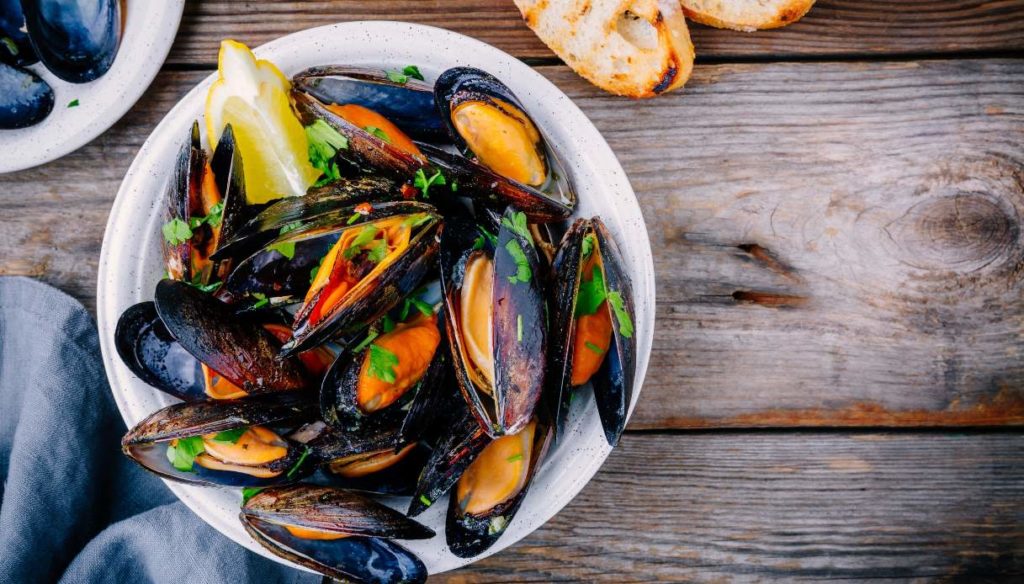 Mussels are mussels, that is bivalve molluscs, which live in a wide variety of marine and lagoon habitats, adapting to different conditions of temperature and water salinity. The two main varieties of mussels are Mytilus edulis – or common mussel – and Mytilus galloprovincialis which differ from each other in their more or less flattened shape and in the color of the valves and the shell. Thanks to a series of filaments called filaments of the byssus, mussels adhere to substrates (usually rocks or boulders) and move thanks to a foot, called muscle. Mussels feed on phytoplankton and organic material present in the sea, continuously filtering the water. These molluscs reproduce between March and October through eggs which, once fertilized, are carried by the sea currents for about three days, until the larvae grow and anchor themselves to a support.

Mussels are farmed and marketed as food in clean, plankton-rich waters. Mythiculture is widespread in different areas of the world and in particular in China, Europe, Chile and New Zealand. Mussels are raised using different methods, for example on ropes positioned vertically, on floating rows or on the seabed and, once harvested, they can be sold loose or packaged, with or without shell, fresh or frozen, often pre-cooked.

A portion of mussels corresponds to 150 grams and provides about 130 calories. 56% of energy is provided by proteins, 29% by lipids or fats and the remaining 15% by carbohydrates. One hundred grams of mussels contain about 12 grams of protein, 3 grams of glycogen and 3 grams of lipids.

The proteins present in mussels contain bioactive peptides, that is, sequences composed of amino acid residues that have shown beneficial properties for health. The main biological effects of the peptides present in mussels include antimicrobial, antihypertensive and anticoagulant activities.

As for fats, those present in mussels include triglycerides and cholesterol but also polyunsaturated fats of the Omega-3 series (PUFA) with known anti-inflammatory properties.

Mussels are also a good source of B vitamins (including niacin, thiamin and riboflavin), vitamin A and mineral salts such as potassium, sodium, phosphorus, calcium, magnesium, iron, copper, zinc and selenium.

Although mussels contain triglycerides, cholesterol, and sodium, moderate consumption of these shellfish can be beneficial for health. In particular, the consumption of mussels as part of a healthy and balanced diet could promote bone growth and health, improve immune defenses and protect the heart and arteries from inflammatory and oxidative processes that predispose to the development of cardiovascular diseases.

Cholesterol is a compound synthesized by all of our tissues, especially the liver, intestines, adrenal cortex and reproductive tissues. It is an important molecule that ensures the correct fluidity of cell membranes, as well as being a precursor of all classes of steroid hormones and serving for the synthesis of vitamin D and bile salts. Inside our body, cholesterol is transported inserted in lipoproteins including LDL (low density liproproteins) which transport lipids from one tissue to another and HDL (high density lipoprotein), known as "good cholesterol" because they carry the cholesterol from the tissues to the liver for its elimination.

In our body, in addition to endogenous cholesterol, there is also cholesterol of food origin, contained only in products of animal origin such as meat, fish, eggs, milk and derivatives. The effect of dietary cholesterol on the plasma cholesterol level is of less importance than the amount and type of fatty acids that are consumed daily. In any case, cholesterol intake should not exceed 300 milligrams per day: a portion of mussels provides about 48 milligrams of cholesterol, so their consumption as part of a balanced and healthy diet is not contraindicated.

Are they bad for the liver?

It is known that marine mussels, including mussels, efficiently absorb and accumulate contaminants from the surrounding environment and have a limited ability to transform such contaminants, compared to fish or other animals, for example. For this reason, mussels and mussels are generally used to monitor the waters and evaluate the accumulation of pollutants. If the mussels are raised or harvested in polluted waters they may have absorbed metals, hydrocarbons, pesticides and microplastics. These substances are recognized by our body as foreign and waste and metabolized mainly through the liver, an organ that can fatigue if the concentration of these substances is high. It is therefore important to pay attention to the place of origin of the purchased mussels and, in any case, not to exceed in consumption.

How to clean the mussels?

The mussels that are on sale shelled are generally packaged and already cleaned, ready to be cooked, while for those sold with the shell it is often necessary to proceed with cleaning. To clean the mussels it is first necessary to remove the threads of the fine linen by hand, tearing it with a decisive movement. Subsequently, the shells must be cleaned carefully using a brush with stiff bristles or a steel wool. Finally, before cooking the mussels, they must be placed in a large pan and covered with water and lemon juice, to which possibly add a bay leaf. After heating the water, the mussels should be left in the covered pan with the heat on low for a few minutes, until all the shells are open. Closed mussels should not be consumed, while the others can be removed from the pan and cooked to your taste.

How long do they last?

The storage times of the mussels vary according to the type of product purchased. Frozen mussels are generally kept for three months in the freezer or in any case no later than the expiry date shown on the package. Fresh mussels, on the other hand, must be kept in the refrigerator and eaten within two or three days at the latest or, alternatively, they can be frozen after purchase. As for vacuum-packed or already cooked mussels, reference is made to the expiry date indicated by the manufacturer.