Naples, how much do you know? 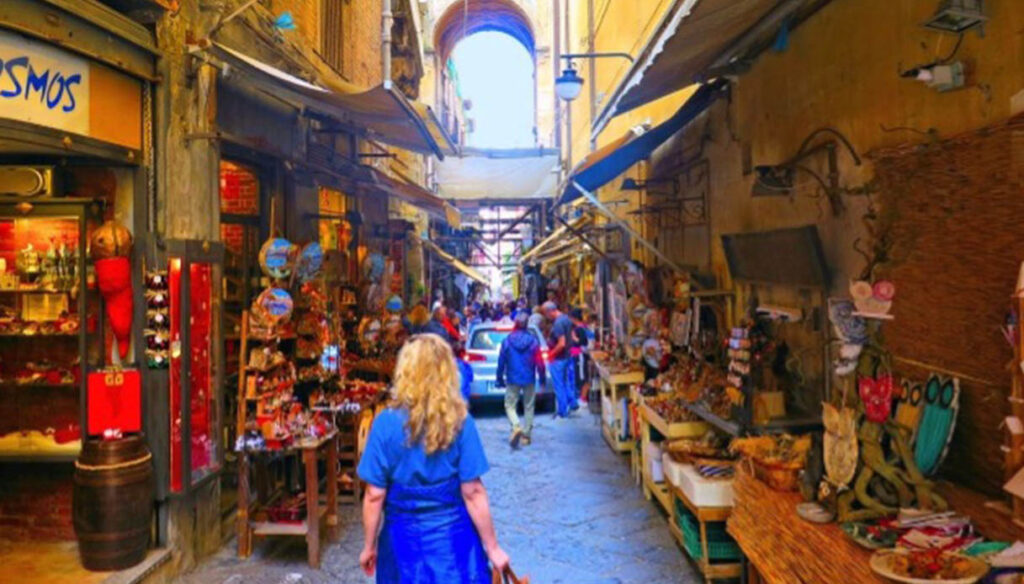 How much do you know about Naples? The curiosities and secrets of the city, from the oldest pizzeria to the secular miracle of San Gennaro.

"Napule è mille culure", sang Pino Daniele and it is impossible not to agree with him because a lifetime is not enough to get to know Naples. A warm city, which embraces you, conquers you and makes you fall in love, with a thousand shades that caress the soul and fill the heart. You can only discover what it has to offer by living it, breathing its sea air, sipping a coffee and strolling through its streets steeped in history. From the most ancient traditions, to the little secrets, to the typical dishes and legends: how much do you really know about Naples? The curiosities that (perhaps) no one has ever told you.

Pasta Garofalo has launched, in collaboration with the artistic-cultural association Be Turista Della Tua Città, an innovative application to discover more than 600 points of interest in the city of Naples and many thematic itineraries, such as "castles" and "churches" but also "street art", "cinema and TV", "famous people", "ancient crafts" and many more. The Be Tourist app is a totally free guide created FOR people but also BY people, who can contribute to the discovery of the city of Naples with tips and advice!

What is the oldest pizzeria in Naples?

Soft and fragrant, with a stuffed cornice and prepared with ingredients that are as simple as they are tasty: Naples is the home of pizza. In every corner of the city, from the center to the outskirts, walking down the street you can feel the unmistakable scent of pasta cooked in a wood oven. It is no coincidence, therefore, that the oldest pizzeria in the world can be found in Naples. This is the Antica Pizzeria Port'Alba, located in the historic center, near Piazza Dante. Founded in 1738, it was initially a small place where pizzas were prepared which were then sold by some street vendors around the city. At the time, the system was called "pizza a otto", because the vendors allowed customers a deferred payment: the money could be paid eight days after eating it. Later, the street selling of food was prohibited on the Port’Alba road because it obstructed the passage of carriages and pedestrians. So in 1830, the place became a real pizzeria, welcoming illustrious customers such as Gabriele D'Annunzio or Benedetto Croce.

What is the lay miracle of San Gennaro (which stopped the lava of Vesuvius)?

On 16 December of each year, the famous “lay miracle” of San Gennaro takes place. An event that keeps the whole population of Naples with bated breath waiting to find out if the blood of the patron saint of the city will melt or not. A prodigious event that has been repeated since December 16, 1631. On that date a violent eruption of Vesuvius was in danger of razing Naples to the ground. The lava had now arrived at the gates of the city, ready to leave no escape for anyone. The Neapolitans therefore decided to appeal to San Gennaro, carrying in procession the bust of the Patron Saint and the ampoules containing the blood to the Ponte dei Granili (today Ponte della Maddalena). The blood suddenly melted and the magma slowed down its course: Naples was safe. From that moment, every year the miracle of San Gennaro began to be celebrated, with a celebration held in the Chapel of the Treasure of San Gennaro, an intimate place that belongs to the people of Naples.

O ’Munaciello is a legendary figure linked to the city of Naples. This character, according to many, would have really existed. It was 1445 when Caterina Frezza, the daughter of a rich and important cloth merchant, fell in love with Stefano Mariconda, a poor boy. An impossible love, made up of nocturnal and secret meetings. In fact, at night Stefano reached Caterina's room, walking on the roofs of Naples. But one evening he was pushed into the void and died. The girl, who became pregnant, was locked up in a convent where she gave birth to a deformed baby. The woman began to dress him with the habit of the Dominican friars and everyone began to call him Lu Munaciello. Years later he died mysteriously and from that moment many claimed to have seen him appear in the streets of the city, perhaps in search of revenge after such a difficult and unfortunate life.

How many theaters are there in Naples?

Among the numerous firsts of Naples is that of being the city with the most theaters in all of Italy. The Campania capital holds about 32 of them. The most famous is the San Carlo, an ancient opera house that hosted great artists and was built in 1737 by order of the Bourbons. Then we find the Bellini Theater, run by the family of the well-known director Tato Russo and the place where Bizet's Carmen was staged for the first time. A Neapolitan saying goes: "'O San Carlo p' 'a grandeur,' o Bellini p '' a bbellezza". The journey continues with the Mercadante Theater, where Eduardo Scarpetta performed his plays, entering into history, and the San Ferdinando Theater, the place of the heart of Eduardo De Filippo. Do not miss the Augusteo Theater which hosted actors and comedians who have conquered with their comedy, such as Alessandro Siani, but also artists such as Pino Daniele.

What is suspended coffee?

The coffee that you drink in Naples is unique in the world, in every sense. In fact, when entering a bar, it is often possible to hear a customer ask for two coffees: “One immediately and one suspended”. It is an ancient custom that tells of the good heart and generosity of the Neapolitans. The customer will simply pay for two coffees: one to drink, while the other will remain "pending" for the next person who arrives and will not be able to pay for it. In this way it will be "offered". Because in Naples, coffee is something sacred and cannot be denied to anyone!

Where is the fertility chair located?

Naples hides truly magical corners and places, between history and legend. Among these is the fertility chair, located in the Spanish Quarters in Vico Tre Re in Toledo 13. It is a session inside a sanctuary dedicated to Santa Maria Francesca of the five wounds of Jesus Christ, considered the first canonized woman of Southern Italy. This is where women who want to have a child go and want to ask for the intercession of the Saint. The path up to the chair can be done every 6th of the month and is dotted with ex-votos, flowers, pink and blue rosettes to give thanks for the grace received.

What is the sweet that binds Naples with France and Poland?

The baba is simple! A masterpiece of Neapolitan culinary art, this dessert boasts rather particular origins. Soaked in rum, soft and super greedy, it is a real treat for the palate. Few people know that, before arriving in Naples, a primordial recipe for babà was invented by Stanislao Leszczyński, a Polish king in exile in France who added rum syrup to kugelhopf, a typical dessert that he considered too dry. He decided to name his creation Ali Babà, in honor of the unforgettable protagonist of The Thousand and One Nights. The dessert then landed in Versailles, brought by his daughter Maria, wife of the French king Louis XV. The recipe was modified, removing saffron and candied fruit. The baba, with its swollen dome shape, then landed in Naples thanks to the queen, immediately becoming a masterpiece of street food.

Why is Castel Dell’Ovo so called?

Castel Dell’Ovo is one of the symbols of Naples. A fascinating place rich in history, linked to an ancient legend. According to tradition, the name of this manor derives from an egg that the poet Virgil would have hidden in his basement inside a cage. Legend has it that in the sea of ​​Naples, a long time ago, there lived mermaids half women and half birds. The mermaid Partenope and her sisters, after failing to enchant Ulysses and his crew, abandoned themselves to the waves. The beautiful Partenope was imprisoned among the rocks of Megaride and died in that place. Before expiring, however, she laid an egg. The poet Virgil, also known to be a great magician, picked it up and decided to hide it in the castle. If it had not broken it would have protected the city and the manor from any calamity. Otherwise numerous disasters would have unleashed on Naples.

Lorenzo Gavazzi
2424 posts
Previous Post
Zanforlin, the return to Amici and the details of the discussion with De Filippi
Next Post
Simona Ventura, returns with "Discovering Simo" and defends the "sons of" and meritocracy