"No to abortion". Italian women protest for their rights 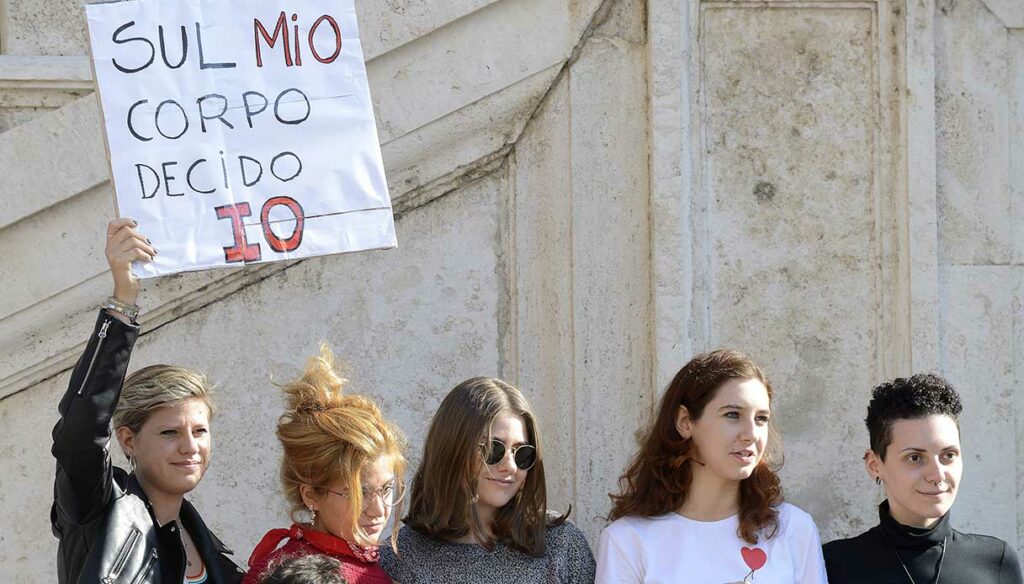 A terrible déjà-vu that takes us back to a time we should never live again. Here coast is happening in the Marche and Umbria

Abortion is not a priority, with these decisive and cutting words the leader of the Brothers of Italy of the Marche Region, Carlo Ciccioli, has ushered in a new era, that of a time regression that is difficult to digest. Abortion jeopardizes the birth rate and the entire identity of a nation, they say, but where have all those rights won by women in previous years gone?

Words that are not just words since the Marche region has chosen not to apply the ministerial guidelines on the administration of Ru486 which provide for the possibility of taking the pill even outside hospitals, such as in clinics and clinics.

But the question of abortion in our country and beyond, see Poland, inevitably triggers dissensions and retrograde positions that seem to cancel decades and decades of feminist battles. But let's go and see what is happening in Italy.

Abortion, the situation in the Marche and Umbria

Between statements, interviews reported on other media and on TV, the theses supported by some Italian political representatives inevitably deny all the rights obtained up to this moment. And that's not all, the specter of racism seems to survive precisely through these beliefs.

In short: we must defend the country, support new births with emphasis and enthusiasm, fight the denatality of Western society in order not to risk the replacement of ethnic groups. Writing and saying these words inevitably makes us the protagonists of a terrible déjà-vu that takes us back to a time we should never live again.

Instead, today, the situation in the Marche is this. And the presence of the only woman in what looks like a patriarchal junta was useless, no. Even the councilor for equal opportunities has confirmed that she is opposed to the termination of pregnancy.

But the Marches are not the only region to take sides against women's rights. In fact, in nearby Umbria we find the president Donatella Tesei of the Northern League of the region. A forerunner, in this sense, who has supported anti-abortion laws for months and, indeed, based his propaganda on this. An activity, this, which sees the rights of women still being infringed.

So in recent days, despite the restrictions of the pandemic, some women took to the streets and on the streets to demonstrate against anti-abortion policies. A surreal situation that on the one hand takes us back in time, on the other it seems to cancel all the events of the 60s and 70s and all the battles won.

But the Italian political representatives of the Lega and the Brothers of Italy have clear ideas, that of limiting access to drug abortion. But that's not all, the short-term goal is to resume and revisit the Pillon bill, filed nationally, which would lead to the retreat of freedom and civil rights of women and children with drastic changes in favor of " natural family.

The first protests following the decision of the governor of the Umbria region, there were already last August with the consequent update by the ministry of health which had established, also in view of the Cronavirus emergency, the possibility of practicing the voluntary termination of pregnancy, through drugs, in day hospital, ordinary hospitalization or in public clinics by the ninth week of gestation.

But the Umbria region, followed by that of the Marche, ignored the guidelines approved by the Higher Health Council, at least until December. However, the situation has not improved at all.

An interesting report by the Internazionale signed by Annalisa Camilli, returns an Italian picture that is anything but comforting. Despite, in fact, the apparent adaptation to national rules, the situation in Umbria seems to obscure women's rights.

In the region, in fact, it is possible to take the abortion pill only in small hospitals, while larger hospitals practice voluntary termination of pregnancy with surgery only once a week, thus denying pharmacological abortion.

Even in the Marche region the situation does not seem to favor women, the region holds the primacy of conscientious objector gynecologists. In some hospitals, surgery is not possible while the RU486 pill is used only by very few hospitals.

The pandemic has made abortion more difficult

To make the whole situation even more complicated is the presence of the health emergency which has created further impediments. Already during the first period of spread of the virus, several feminist associations had denounced the drastic halving of the voluntary abortion service due to closed or limited wards.

In some regions such as Umbria, then, there is no path designed for positive women and, as can be understood, waiting for negativization is unthinkable. The refusal of hospitals to proceed is then added to the high rate of conscientious objectors present in Italy among gynecologists, putting us in front of a situation that sees the rights of women denied.

Pharmacological abortion with the RU486 pill

In this historical moment of health emergency, the easiest way for women to access abortion is that given by the RU486 pill. We recall that pharmacological abortion was introduced in Italy in 2009, but today its percentage of use is still very low.

According to a survey conducted by Fatto Quotidiano, despite the fact that women who intend to practice a voluntary interruption of pregnancy choose the pill, the availability of this is very limited in some regions, such as Marche, Lazio, Abruzzo, Sardinia and Sicily which count less than 0.03 principals per 10,000 women.

In a period where hospitals are saturated and operating theaters are needed more than ever, the use of RU486 is certainly recommended for all women who opt for voluntary termination of pregnancy, especially in view of the fact that this can be administered in counseling center and outpatient clinics. This solution would decongest hospitals in this delicate period. However, the cultural reasons that hinder its use, supported by the themes supported by some Italian politicians who push for the "natural family", make the whole situation difficult and complicated.

Among public consultants that are in short supply throughout Italy and the presence of an ever increasing number of conscientious objector gynecologists, the rights of women living in Italy, and especially in the Marches and Umbria, are at risk. Protests are also limited, due to the Coronavirus, however something needs to be done to defend a right for which we have already fought many, too many battles.

Lorenzo Gavazzi
2286 posts
Previous Post
Letizia of Spain discovers arms and legs and enchants with the skirt of power
Next Post
Friends 2021, Rosa in crisis after rehearsals: "I can't afford it"